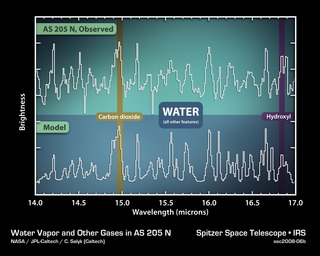 This plot shows data captured by Spitzer's IRS instrument, indicating a strong signature of water vapor in the disk of gas and dust surrounding a young star.

The Infrared Spectrograph was one of Spitzer's three science instruments. It provided both high- and low-resolution spectroscopy at mid-infrared wavelengths (from 5 -- 40 microns).

Like a prism breaking up light into a rainbow, a spectrograph takes the incoming infrared light from a distant object and breaks it up into a spectrum. Each chemical element in the universe has its own light signature in the spectrum, like a unique fingerprint. By studying the spectrum of light from a distant object, astronomers can tell what elements and molecules the object is made of. Spitzer observers used this method to find water on a planet orbiting another star, among many other uses.