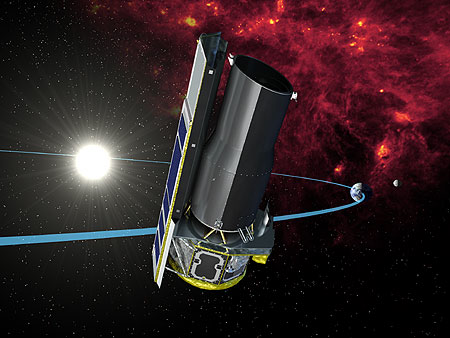 The Spitzer redesign also managed to cut costs by placing the observatory into an Earth-trailing orbit. Instead of orbiting Earth itself, the observatory trails behind Earth as it orbits the Sun and drifts away from us at about 1/10th of one astronomical unit per year.

This innovative orbit lets nature cool the telescope, allowing the observatory to operate for around 5.5 years using 360 liters of liquid helium coolant. In comparison, Spitzer's predecessor, the Infrared Astronomical Satellite, used 520 liters of cryogen in only 10 months.

This unique orbital trajectory also keeps the observatory away from much of Earth's heat, which can reach 250 Kelvin (-23 Celsius, or -10 Fahrenheit) for satellites and spacecraft in more conventional near-Earth orbits.

The most striking benefit of this design was the substantial reduction in the size of the Observatory, and therefore the launch costs. Spitzer was launched on a Boeing Delta-II rocket rather than the larger and more expensive Titan or Atlas rockets. The second major benefit is that the warm-launch vastly simplified pre-launch testing and assembly. Without the need to enclose the entire observatory in a cryostat, the cost of testing the subsystems was greatly reduced.

Another major advantage of the solar orbit is that Spitzer couldd see a much wider area of the sky. Sensitive observatories such as Spitzer must be careful to avoid looking at, or near, bright objects such as the Sun, Earth and Moon.

By moving the telescope well away from our planet, Spitzer's view of the sky was limited by only the Sun - instead of the Sun and Earth.  Spitzer could not point closer than 80 degrees in the direction of the Sun, because the solar panels cannot shield the telescope from hot sunlight. Secondly, it cannot point more than 120 degrees away from the Sun, otherwise the solar panels did not get enough light to generate the electricity needed to generate power.

Spitzer's window of visibility changes as the telescope moved around the Sun. Some regions of the sky could be seen at all times, while others were seen only twice a year, for around 40 days at a time. Spitzer could see about a third of the sky at any one time. This broad visibility window meant that the scheduling of Spitzer's observations was far simpler than if it had been placed in Earth orbit, and allowed the Spitzer team to achieve a high observing efficiency.