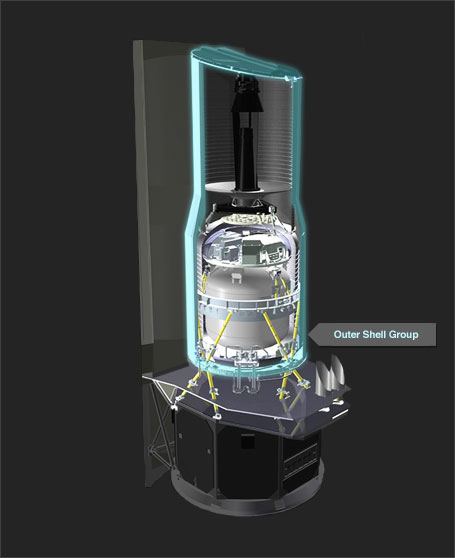 The outer shell of the Cryostat Telescope Assembly was made of a dust cover, an outer shield (cooled by helium vapor from the cryostat), thermal shields (which blocked radiation from space), and solar panels to provide power to the spacecraft. The outer shell surrounded the telescope and the cryostat (with all of the instruments inside). It prevented heat from the Sun and the rest of the spacecraft from reaching the cold telescope and instruments by radiating it away into space.

The outer shell was made of lightweight, aluminum honeycomb sandwich construction. It was painted black on the side that faces away from the Sun, to allow it to radiate the maximum amount of heat into space. On the Sun-facing side, it was shiny, so that it reflected as much of the heat from the Sun and solar panels as possible. The telescope had to be kept as cool as possible at all times, so that precious liquid helium was not wasted on cooling the telescope.  During launch, the outer shell was closed at the top by an ejectable cover to protect the telescope mirror and other surfaces from the dry nitrogen used to maneuver the spacecraft.