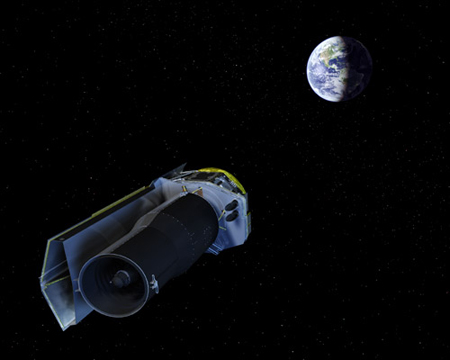 Spitzer was also able to maximize its efficiency by utilizing a "store-and-dump" method of transferring data from the telescope back to Earth.

When the scientific observations were taken, Spitzer stored up the data instead of transmitting it all back to Earth immediately. Spitzer's high-gain antenna was fixed to point in a single direction, so the observatory interrupted its science program twice a day to re-point the antenna towards the Earth and downlink all of the data.

The average data transfer rate was 85 kilobits per second (kbps) in the cryogenic mission. In case Spitzer missed a telemetry pass for some reason, there was 8 gigabits of onboard data storage, which prevented data being overwritten before it could be downlinked to the ground. Communications with Spitzer were all handled through NASA's Deep Space Network, with roughly one-hour communication windows scheduled approximately every 12-24 hours.

This method ensured that Spitzer spent as little time as possible transferring data between the observatory and the ground, and instead spent the vast majority of its precious lifetime conducting scientific observations. Spitzer made about 150,000 observations during the total mission.

New observing schedules were sent to the telescope every week, although it was possible to interrupt the schedule and uplink new instructions more frequently if an urgent observation request was triggered by one of the astronomers using Spitzer (so-called "Target of Opportunity" observation).