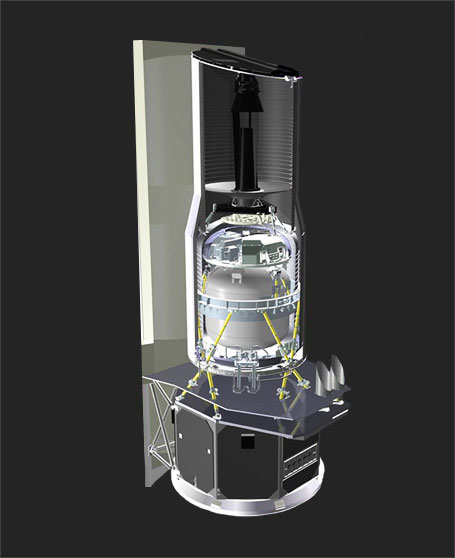 All of Spitzer's cold items were kept in the Cryogenic Telescope Assembly (CTA), which was made up of four main-parts: The Telescope, Multiple Instrument Chamber (Infrared Array Camera, Infrared Spectrograph, and Multiband Imaging Photometer), Cryostat, and Outer Shell Group.

A tank of liquid helium, called the "cryostat", acted as a coolant - producing a freezing vapor that cooled the entire CTA to about five degrees Kelvin (-459 Fahrenheit, or -268 Celsius).

To prevent the liquid helium from being used up too quickly, the CTA was attached to the telescope with special insulating struts, and was surrounded by a series of thermal radiation shields that prevented heat from the spacecraft from reaching the telescope.

The outer shell of the Observatory was made of aluminum. It was painted black on the side facing away from the Sun, to radiate as much heat into space as possible, and was shiny on the Sun-facing side, to reflect the Sun's light instead of absorbing it. The solar array and the spacecraft shields blocked the CTA from the Sun and the rest of the spacecraft at all times, helping to keep the CTA as cool as possible.