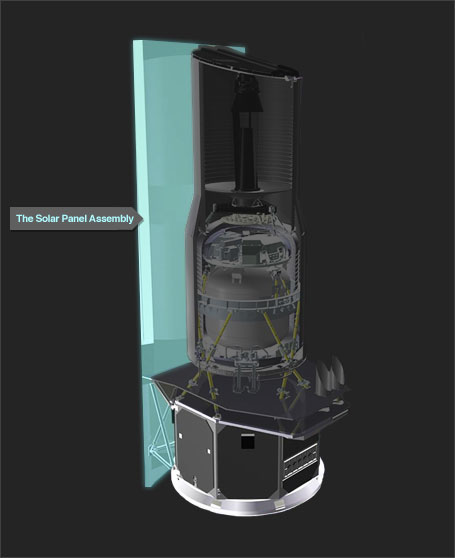 Spitzer's Solar Panel Assembly was designed to provide the electrical power needed to operate the Observatory. It was made up of two solar panels, each of which has 392 solar cells. Each solar cell measured 5.5 cm by 6.5 cm, and together they converted the Sun's radiation into a total of 427 Watts of electrical energy - about a quarter of the power used in a hair blow dryer. In order to keep enough sunlight on the solar panels, Spitzer could not point further than 120 degrees away from the Sun.

Each of the solar panels had half of the total area covered in solar cells and half the area covered with optical reflectors. This reflected away enough sunlight to keep the solar panels from getting too hot. The average temperature was about 330 degrees Kelvin (approximately 134 degrees Fahrenheit, or 57 degrees Celsius). The wedge-shaped Solar Panel Assembly was angled away from the Outer Shell to point it more directly towards the Sun, and to minimize the heat transferred to the Cryogenic Telescope Assembly.