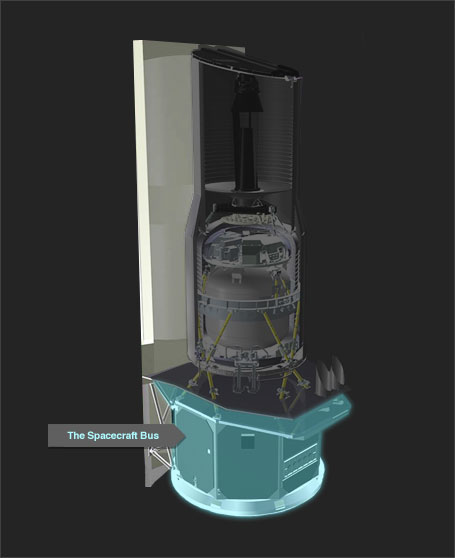 Spitzer's Spacecraft Bus was an octagonal structure at the base of the Observatory that housed the avionics and the warm electronic parts of the science instruments. The Spacecraft Bus supplied the science instruments with the electrical power generated by the Solar Panel Assembly, oriented and stabilized the telescope, collected, compressed and stored the science data for transmission to Earth, executed the stored commands to carry out the planned observing schedule, and communicated with the ground systems.

The Spacecraft Bus was also the mounting point for the star tracker and gyroscopes that allowed Spitzer to orient itself in space. The main antenna for communication with Earth, called the High Gain Antenna was mounted on the back of the bus, and the secondary antennae (the Low Gain Antennae) were mounted on the side. The maneuvering thrusters were mounted on outriggers attached to the bus.