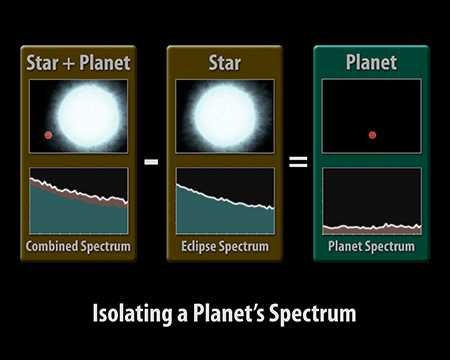 Spitzer marked a new age in planetary science by being the first telescope to directly detect light of planets outside of our Solar System, essentially allowing "exoplanet" planets to be directly studied and compared. The great infrared observatory also made it possible to determine the temperatures, winds, and atmospheric compositions on these distant planets.

A so-called "hot Jupiter" is a gas giant exoplanet that zips closely around its parent star. To distinguish the planet glow from that of its fiery hot host star, astronomers used Spitzer to collect the total infrared light from both the star and the planet. Then, when the planet dipped behind the star as part of its regular orbit, Spitzer measured the infrared light coming from just the star. This pinpointed exactly how much infrared light belongs to the planets.

Prior to Spitzer, all confirmed exoplanet planets were detected indirectly, mainly by the "wobble" technique and more recently, the "transit" technique. In the first method, a planet is detected by the gravitational tug it exerts on its parent star, which makes the star wobble. In the second, a planet's presence is inferred when it passes in front of its star, causing the star to dim, or blink. Both strategies use visible-light telescopes and indirectly reveal the mass and size of planets, respectively. Spitzer used the transit technique extensively.