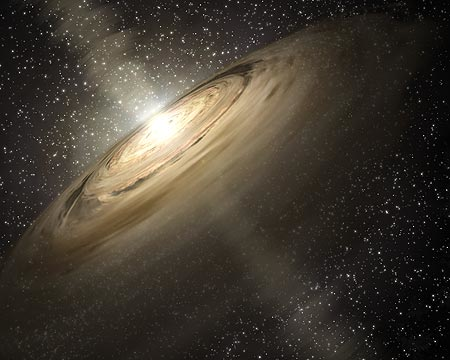 This artist's concept illustrates a solar system that is a much younger version of our own.

The heat-sensitive infrared eyes of NASA's Spitzer Space Telescope were perfect for studying distant planet forming disks, and characterizing exoplanets, or planets beyond our Solar System.

When a cosmic cloud condenses, the baby star that forms inside is rotating. The dusty material surrounding the newborn star is also moving, and will eventually flatten into a disk around the new star's equator. This dusty disk material is the stuff that comets, asteroids, and planets are made of.

Some astronomers think that planets form like snowballs over millions of years, as small dust grains clump together to form larger rocks. Some of these cosmic rocks then smash together to form rocky planets, like Earth, or the cores of gas-giant planets like Jupiter. Large rocks that do not form planets often become asteroids and comets.

Just as students sitting at the back of a classroom cannot see the small piece of chalk in their teacher's hand, astronomers on Earth cannot directly observe planets and asteroid belts in other solar systems. They are just too far away. But when the teacher grinds the chalk stick on a board and spreads its dust to relay a lesson, even students sitting tens of feet away can see that their instructor is using chalk.

Similarly, it is easier for astronomers to see dust around a star than it is for them to detect rocks or planets. Like chalk dust on the classroom board, dust around a distant star covers more area than a planet, comet, or asteroid. As the small dust particles absorb heat from the host star, they re-emit most of their light at long infrared wavelengths, which Spitzer could detect. This is how Spitzer identified star systems with dusty disks that might be forming planets.

Like burners on an electric stovetop turning from "red" to "white" as they get hotter, the dust in a disk will have different temperatures depending on its distance from the host star. Astronomers quantify the color of the dust by measuring its spectrum, or brightness, with Spitzer's infrared spectrometer and imaging cameras. Scientists use this information to determine the structure and age of the disk. They can also give hints about whether planets are currently forming, or if they have already formed.

With Spitzer, astronomers determined that terrestrial planets form around many, if not most of the nearby Sun-like stars in our galaxy, suggesting that the potential for life might be more common than previously thought. The telescope also found observational evidence of planet formation around dead stars, and stars as young as one million years old. Future missions will follow up on many of Spitzer's observations to determine whether Earth-like planets exist in any of these systems.