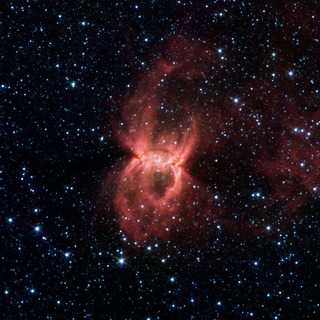 The Infrared Array Camera (IRAC) was one of Spitzer's three science instruments. It was an imaging camera, designed to detect light at near- and mid-infrared wavelengths - in other words, light with wavelengths between 3.6 and 8.0 microns (1 micron is one-millionth of a meter). It was a general-purpose camera that was used by observers for a wide range of astronomical research programs.

Unlike a normal camera, which had a single detector array, and was sensitive to a wide range of different wavelengths of light, IRAC was a four-channel camera, meaning that it had four different detectors, each measuring light at one particular wavelength. It took simultaneous images at wavelengths of 3.6, 4.5, 5.8 and 8.0 microns, and each of the four detector arrays in the camera was 256 x 256 pixels in size. IRAC used two different types of material in the detector arrays: the two shorter-wavelength channels (3.6 and 4.5 microns) had detectors made of indium and antimony, and the two longer-wavelength channels (5.8 and 8.0 microns) had detectors that had been specially treated with arsenic. The only moving part on the whole of the IRAC instrument was the camera shutter, which actually was not used in-flight until the last observing campain in January 2020.

IRAC was the only one of Spitzer's instruments that still functioned once the liquid helium cryogen ran out. The 5.8 and 8.0 micron detectors were too warm to be useful for scientific observations, but the 3.6 and 4.5 micron detectors still worked at peak performance until the end of the mission on January 30, 2020.