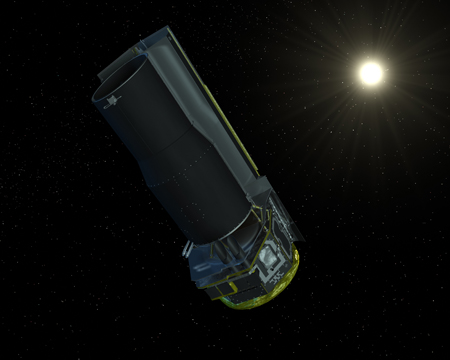 Spitzer was designed to detect infrared radiation, which is primarily heat radiation. It was comprised of two major components:

The Spacecraft, which controlled the telescope, provided power to the instruments, handled the scientific data and communicated with Earth.

It may seem like a contradiction, but NASA's Spitzer Space Telescope had to be simultaneously warm and cold to function properly. Everything in the Cryogenic Telescope Assembly had to be cooled to only a few degrees above absolute zero (-459 degrees Fahrenheit, or -273 degrees Celsius). This was achieved with an onboard tank of liquid helium, or cryogen. Meanwhile, electronic equipment in The Spacecraft portion needed to operate near room temperature.

Spitzer's highly sensitive instruments allowed scientists to peer into cosmic regions that are hidden from optical telescopes, including dusty stellar nurseries, the centers of galaxies, and newly forming planetary systems. Spitzer's infrared eyes also allowed astronomers to see cooler objects in space, such as failed stars (brown dwarfs), extrasolar planets, giant molecular clouds, and organic molecules that may hold the secret to life on other planets.

Spitzer was originally built to last for a minimum of 2.5 years, but it lasted in the cold phase for over 5.5 years. On May 15, 2009 the coolant was finally depleted and the Spitzer "warm mission" began. Providing imaging with two channels (at 3.6 and 4.5 microns) in one of its instruments (IRAC), Spitzer continued to operate until January 30, 2020. The warm mission became the "Spitzer Beyond" mission in August 2016. NASA announced in May 2019 that it would end the Spitzer mission on January 30, 2020, naming the remaining mission the “Spitzer Final Voyage”.