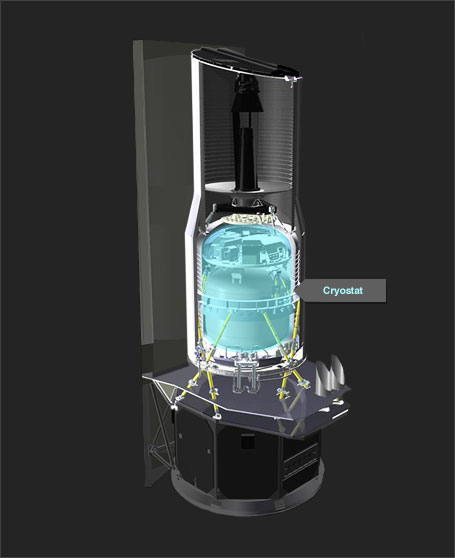 Spitzer was designed to look at faint heat radiation from objects in space. In order to be able to do this, the instruments on board has to be kept very cold so that their own heat did not interfere with the observations. Spitzer carried a "cryostat", which used liquid helium vapor from the helium tank to keep the instruments cold. The cryostat held about 360 liters of liquid helium, and could cool the instruments to temperatures as low as 1.4 degrees Kelvin (roughly -457 degrees Fahrenheit, or -272 degrees Celsius) for more than 5 years.

The cryostat was attached to the bottom of the telescope, and consisted of the helium tank, a vacuum shell, inner and middle vapor-cooled shields and a fluid management system. The telescope and the cryostat shell were launched warm, and cooled down to about 35 degrees Kelvin once they were in orbit. The cryostat vacuum shell was sealed during ground operations and launch, and kept closed as the telescope cooled in order to protect the delicate instruments. Once the cryostat had cooled, a door on the top of the shell was opened to allow light into the Multiple Instrument Chamber.