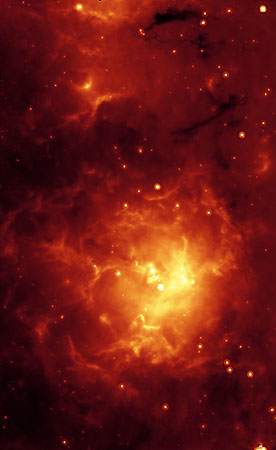 Stars form like raindrops in space, from condensing clouds of gas and dust. Technically these luminaries do not visibly "light up" until they have acquired enough mass and gravity to ignite thermonuclear fusion in their cores. As the collapsing cloud becomes increasingly massive, its gravitational pull also becomes stronger.

Because these stellar embryos and infants initially develop behind a thick veil of cosmic dust, most telescopes are blind to the beginning stages of star formation, but not NASA's Spitzer Space Telescope. Like a stellar sonogram, Spitzer's heat-sensitive infrared eyes snapped the first portraits of stars as they form.