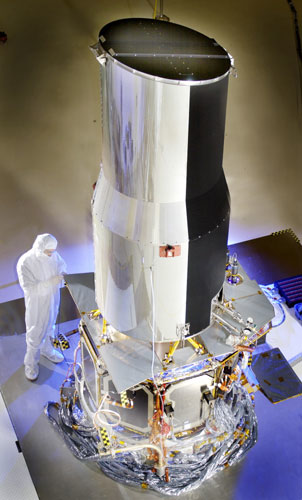 The Spitzer Space Telescope was a technological marvel, featuring many innovations never before used on a space mission. It stood about 4 meters (13 feet) tall, and weighed approximately 865 kilograms (1,906 pounds).

Since Spitzer was designed to detect infrared radiation, or heat, its detectors and telescope had to be cooled to only about 5 degrees above absolute zero (-450 degrees Fahrenheit, or -268 degrees Celsius). This ensured that the observatory's "body heat" did not interfere with its observations of relatively cold cosmic objects.

While parts of Spitzer had to be kept cold to function properly, other electronics onboard the spacecraft needed to operate near room temperature. To achieve this balance of warm and cold, the telescope was compartmentalized into two components:

The Spacecraft - contained the relatively warm components, including solar panels, telescope controls and tools to communicate with Earth.

Innovations - other creative ways scientists and engineers sed to achieve the temperature balance.