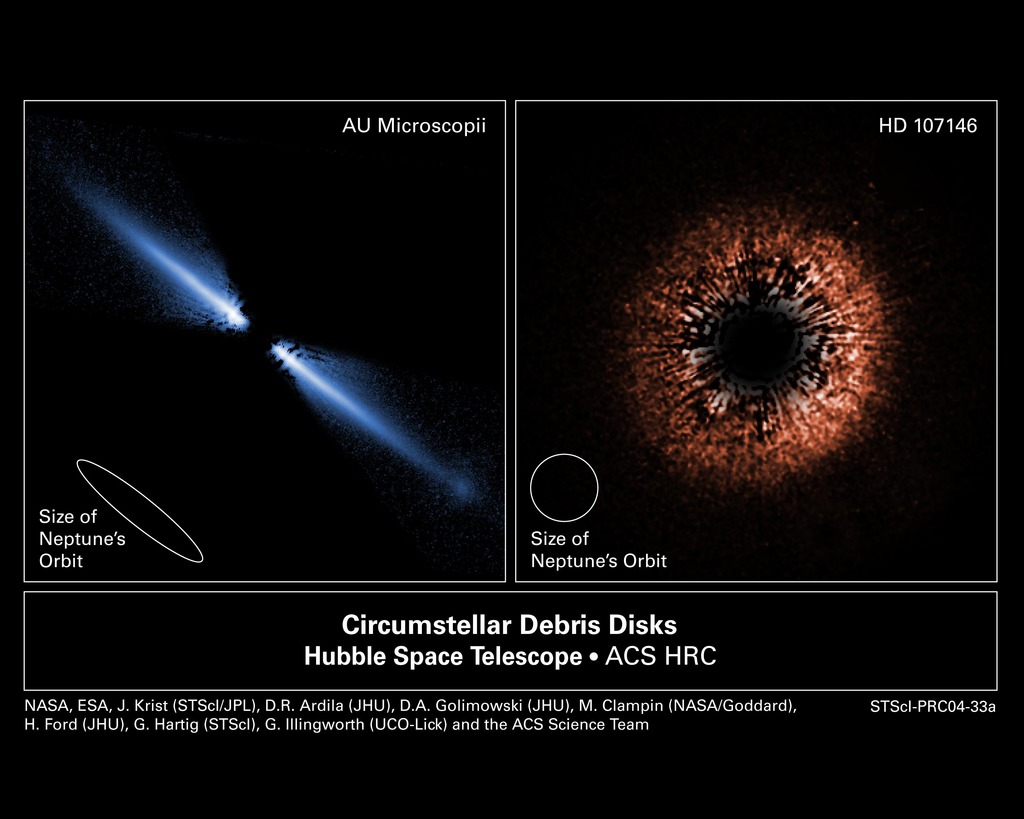 [LEFT: AU Microscopii] - A visible-light image of a debris disk around the red dwarf star AU Microscopii. Planets may be forming, or might already exist, within it. The disk glows in starlight reflected by tiny grains of dust created by the collisions of asteroids and comets. Because it is composed of the pulverized remnants of these objects, it is called a "debris disk." More than 40 billion miles across, it appears like a spindle of light because we view it nearly edge on (like looking at a dinner plate along its side). The star is about 12 million years old and is only 32 light-years from Earth. This makes its disk the closest yet seen in reflected starlight. It is also the first disk imaged around an M-type red dwarf, the most common type of star in the stellar neighborhood around the Sun. The Hubble Space Telescope images, taken with the Advanced Camera for Surveys (ACS) reveal that the disk has been cleared of dust within about a billion miles of the star (first indicated from infrared-light measurements).

The ACS images confirm that the disk is warped and has small variations in dust density that, along with the central clearing, may be caused by the tugging of an unseen companion, perhaps a large planet. ACS shows that this is the only debris disk known that appears bluer than the star it surrounds. This may indicate that there are more small grains of dust, compared to large ones, than has been seen before in other such disks. Smaller grains scatter blue light better than red. The surplus of small grains may be due to the fact that the star is not bright enough to blow away these tiny particles. In brighter, hotter stars, the pressure from radiation can actually push small dust grains out of the disk and far out into space.

[RIGHT: HD 107146] - This is a false-color view of a planetary debris disk encircling the star HD 107146, a yellow dwarf star very similar to our Sun, though it is much younger (between 30 and 250 million years old, compared to the almost 5 billion years age of the Sun). The star is 88 light-years away from Earth. This is the only disk to have been imaged around a star so much like our own. The slight brightness on one side of the disk is due to the fact that small dust particles scatter more light when they are between Earth and the star, rather than behind the star. This suggests that the bright side is closer to us. The disk is redder than the star whose light it reflects, indicating that it contains grains one two-thousandth of a millimeter in size (about 100 times smaller than household dust).

Our Sun is believed to have a ring of dust around it, lying just beyond the orbit of Neptune, although it is ten times narrower than the one around HD 107146. Our solar system also has between 1,000 and 10,000 times less dust. The size of the ring, its the thickness, and the amount of dust make it unlikely that HD 107146 will ever evolve into a system like our own. This is interesting, as it shows that the planetary systems around the same kind of stars may have very different evolutionary paths. 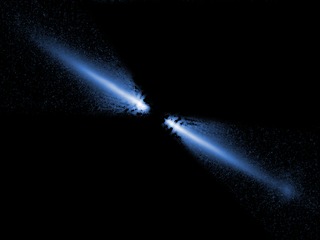 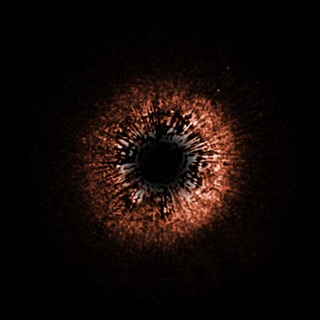