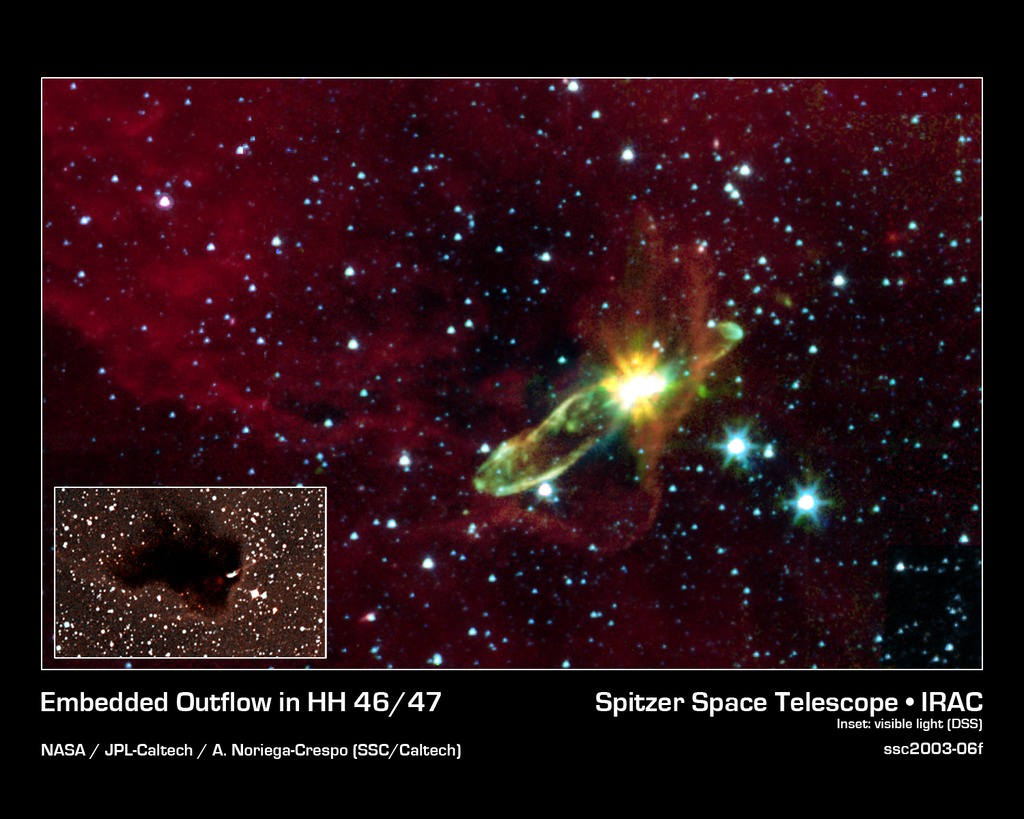 This image from NASA's Spitzer Space Telescope transforms a dark cloud into a silky translucent veil, revealing the molecular outflow from an otherwise hidden newborn star. Using near-infrared light, Spitzer pierces through the dark cloud to detect the embedded outflow in an object called HH 46/47. Herbig-Haro (HH) objects are bright, nebulous regions of gas and dust that are usually buried within dark clouds. They are formed when supersonic gas ejected from a forming protostar, or embryonic star, interacts with the surrounding interstellar medium. These young stars are often detected only in the infrared.

The Spitzer image was obtained with the infrared array camera. Emission at 3.6 microns is shown as blue, emission from 4.5 and 5.8 microns has been combined as green, and 8.0 micron emission is depicted as red.

HH 46/47 is a striking example of a low mass protostar ejecting a jet and creating a bipolar, or two-sided, outflow. The central protostar lies inside a dark cloud (known as a 'Bok globule') which is illuminated by the nearby Gum Nebula. Located at a distance of 1140 light-years and found in the constellation Vela, the protostar is hidden from view in the visible-light image (inset). With Spitzer, the star and its dazzling jets of molecular gas appear with clarity.

The 8-micron channel of the infrared array camera is sensitive to emission from polycyclic aromatic hydrocarbons. These organic molecules, comprised of carbon and hydrogen, are excited by the surrounding radiation field and become luminescent, accounting for the reddish cloud. Note that the boundary layer of the 8-micron emission corresponds to the lower right edge of the dark cloud in the visible-light picture.

Outflows are fascinating objects, since they characterize one of the most energetic phases of the formation of low-mass stars (like our Sun). The jets arising from these protostars can reach sizes of trillions of miles and velocities of hundreds of thousands miles per hour. Outflows are clear evidence of the presence of a process that creates supersonic beams of gas. This mechanism is tightly bound to the presence of circumstellar discs which surround the young stars. Such discs are likely to contain the materials from which planetary systems form. Our Sun probably underwent a similar process some 4.5 billion years ago. Hence the interest in understanding how quickly and efficiently this mass accretion and loss process takes place in protostars. 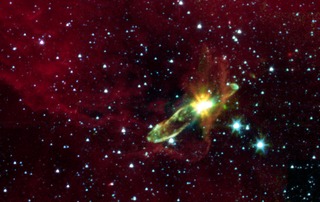 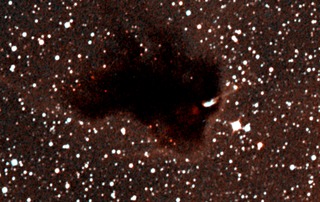