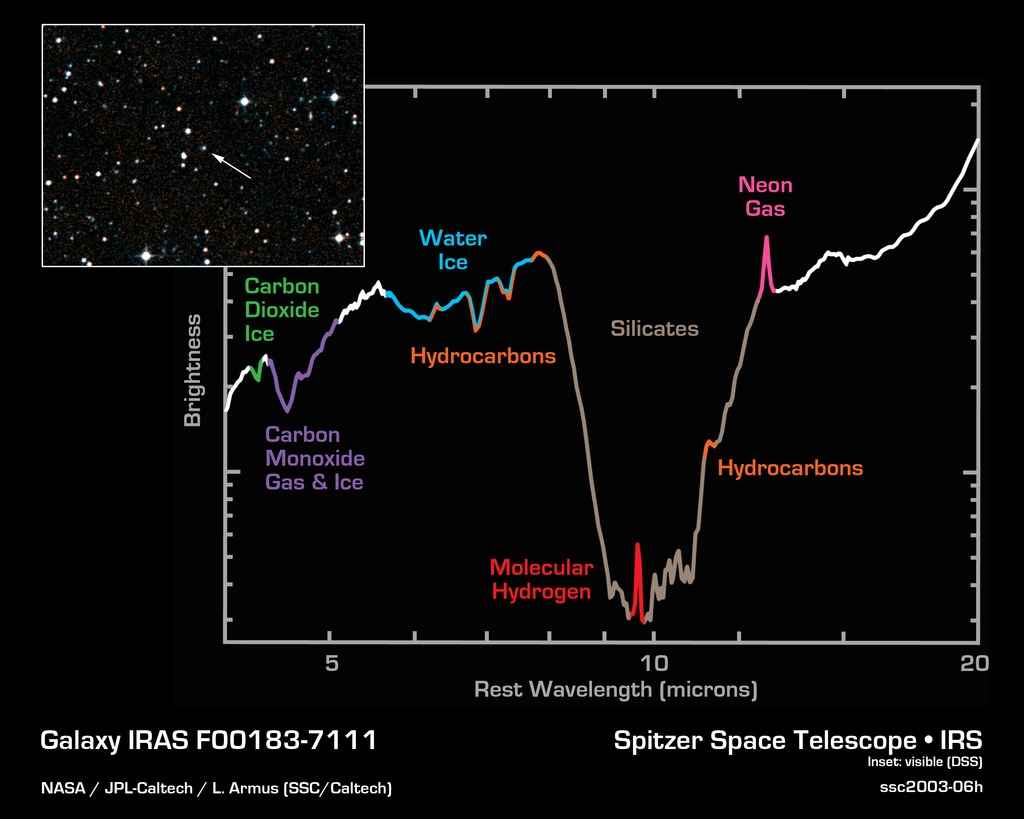 NASA's Spitzer Space Telescope has detected the building blocks of life in the distant universe, albeit in a violent milieu. Training its powerful infrared eye on a faint object located at a distance of 3.2 billion light-years (inset), Spitzer has observed the presence of water and organic molecules in the galaxy IRAS F00183-7111. With an active galactic nucleus, this is one of the most luminous galaxies in the universe, rivaling the energy output of a quasar. Because it is heavily obscured by dust, most of its luminosity is radiated at infrared wavelengths.

The infrared spectrograph instrument onboard Spitzer breaks light into its constituent colors, much as a prism does for visible light. The image shows a low-resolution spectrum of the galaxy obtained by the spectrograph at wavelengths between 4 and 20 microns. Spectra are graphical representations of a celestial object's unique blend of light. Characteristic patterns, or fingerprints, within the spectra allow astronomers to identify the object's chemical composition and to determine such physical properties as temperature and density.

The broad depression in the center of the spectrum denotes the presence of silicates (chemically similar to beach sand) in the galaxy. An emission peak (red) within the bottom of the trough is the chemical signature for molecular hydrogen. The hydrocarbons (orange) are organic molecules comprised of carbon and hydrogen, two of the most common elements on Earth. Since it has taken more than three billion years for the light from the galaxy to reach Earth, it is intriguing to note the presence of organics in a distant galaxy at a time when life is thought to have started forming on our home planet.

Additional features in the spectrum reveal the presence of water ice (blue), carbon dioxide ice (green) and carbon monoxide (purple) in both gas and solid forms. The magenta peak corresponds to singly ionized neon gas, a spectral line often used by astronomers as a diagnostic of star formation rates in distant galaxies.

The Spitzer spectrum is the result of only 14 minutes of integration time, highlighting the power of the infrared spectrograph to unlock the secrets of distant galaxies.