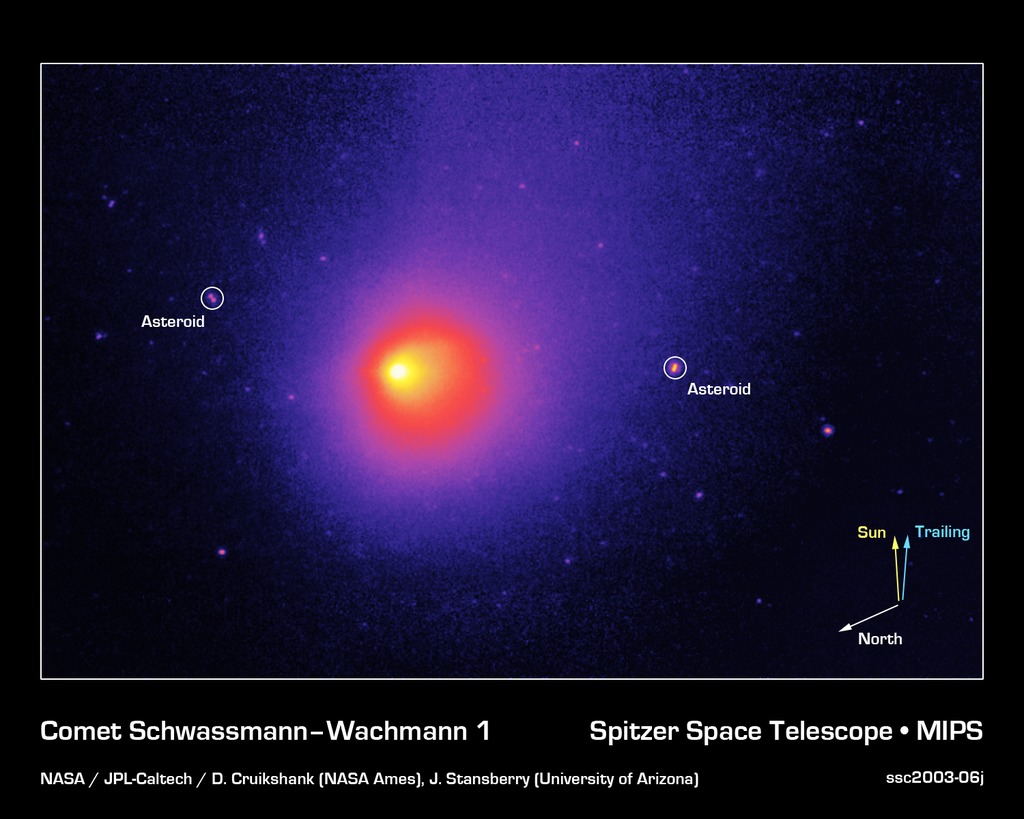 NASA's new Spitzer Space Telescope has captured an image of an unusual comet that experiences frequent outbursts, which produce abrupt changes in brightness. Periodic comet Schwassmann-Wachmann I (P/SW-1) has a nearly circular orbit just outside that of Jupiter, with an orbital period of 14.9 years. It is thought that the outbursts arise from the build-up of internal gas pressure as the heat of the Sun slowly evaporates frozen carbon dioxide and carbon monoxide beneath the blackened crust of the comet nucleus. When the internal pressure exceeds the strength of the overlying crust, a rupture occurs, and a burst of gas and dust fragments is ejected into space at speeds of 450 miles per hour (200 meters per second).

This 24-micron image of P/SW-1 was obtained with Spitzer's multiband imaging photometer. The image shows thermal infrared emission from the dusty coma and tail of the comet. The nucleus of the comet is about 18 miles (30 kilometers) in diameter and is too small to be resolved by Spitzer. The micron-sized dust grains in the coma and tail stream out away from the Sun. The dust and gas comprising the comet's nucleus is part of the same primordial materials from which the Sun and planets were formed billions of years ago. The complex carbon-rich molecules they contain may have provided some of the raw materials from which life originated on Earth.

Schwassmann-Wachmann 1 is thought to be a member of a relatively new class of objects called "Centaurs," of which 45 objects are known. These are small icy bodies with orbits between those of Jupiter and Neptune. Astronomers believe that Centaurs are recent escapees from the Kuiper Belt, a zone of small bodies orbiting in a cloud at the distant reaches of the solar system.

Two asteroids, 1996 GM36 (left) and 5238 Naozane (right) were serendipitously captured in the comet image. Because they are closer to us than the comet and have faster orbital velocities, they appear to move relative to the comet and background stars, thereby producing a slight elongated appearance. The Spitzer data have allowed astronomers to use thermal measurements, which reduce the uncertainties of visible-light albedo (reflectivity) measurements, to determine their size. With radii of 1.4 and 3.0 kilometers, these are the smallest main-belt asteroids yet measured by infrared means. 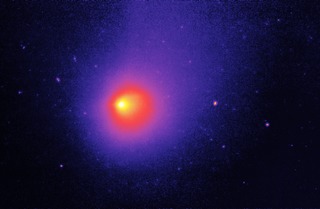