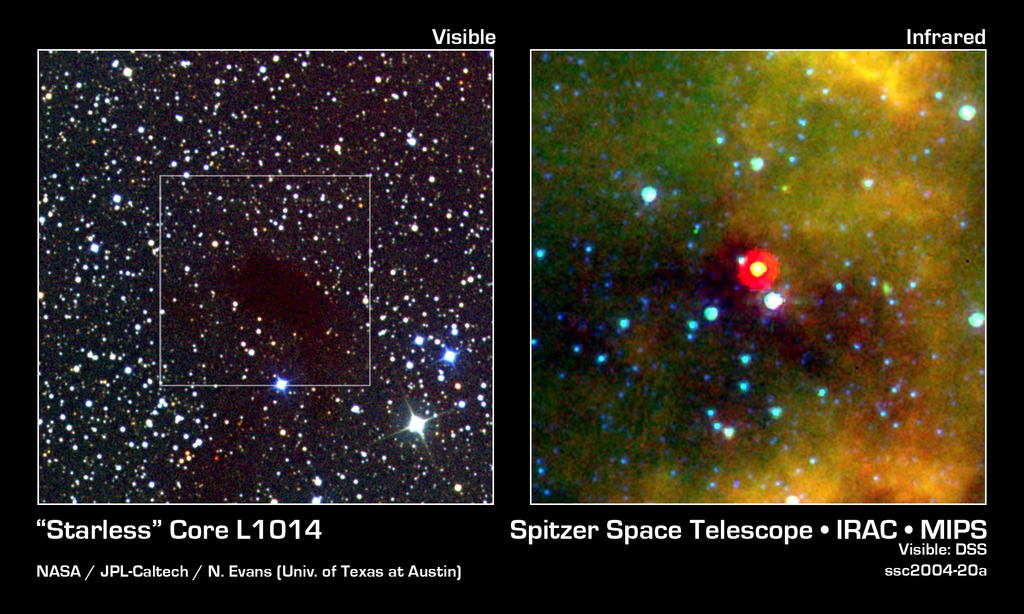 The "Cores to Disks" Spitzer Legacy team is using the two infrared cameras on NASA's Spitzer Space Telescope to search dense regions of interstellar molecular clouds (known as "cores") for evidence of star formation. Part of the study targeted a group of objects with no known stars to study the properties of such regions before any stars have formed. The first of these "starless cores" to be examined held a surprise: a source of infrared light appeared where none was expected.

The core is known as L1014, the 1,014th object in a list of dark, dusty "clouds" compiled by astronomer Beverly Lynds over 40 years ago. These have proved to be homes to a rich variety of molecules and are the birthplaces of stars and planets.

The Spitzer image is a 3.6 micron (blue), 8.0 micron (green) and 24.0 micron (red) composite image. The light seen in the infrared image originates from very different sources. The bright yellow object at the center of the image is the object detected in the "starless core". The red ring surrounding the object is an artifact of the reduced spatial resolution of the telescope at 24 microns.

At 3.6 microns the light comes mainly from the object at the heart of the core. At longer wavelengths, the light from the object becomes stronger, a signature that it is not a background star. Also in the longer wavelengths (8.0 to 24.0 microns), astronomers saw the glow from interstellar dust, glowing green to red in the Spitzer composite image. This dust consists mainly of a variety of carbon-based organic molecules known collectively as polycyclic aromatic hydrocarbons. The red color traces a cooler dust component.

No previous observations showed any hint of a source in L1014. For example, the visible light image is from the Digital Sky Survey and is a B-, R-, and I-band composite image (wavelengths ranging from 0.4 to 0.7 microns). The dark cloud in the center of the image is the core, completely opaque in the visible due to obscuration by dust.

The L1014 core lies in the direction of Cygnus. It is thought to be about 600 light years away, but the distance is somewhat uncertain.

The results from this study are published by C. Young and the "Cores to Disks" team in the Astrophysical Journal. 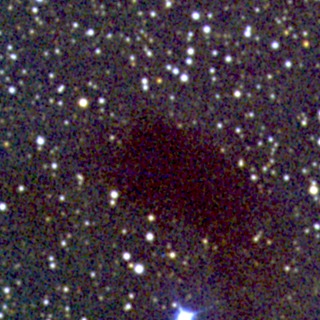 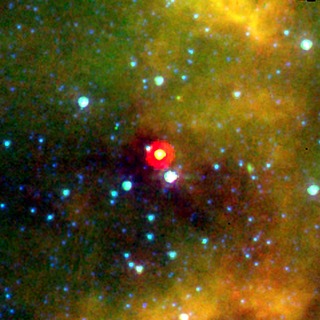