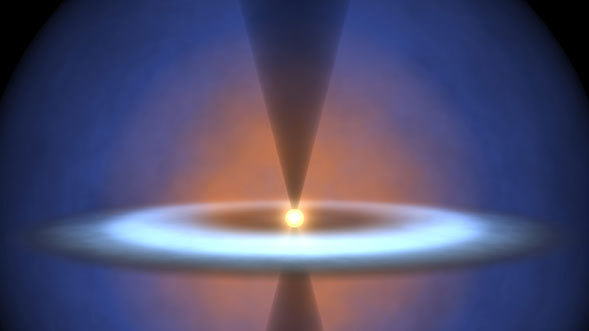 NASA's Spitzer Space Telescope has detected enough water vapor to fill the oceans on Earth five times inside the collapsing nest of a forming star system. Astronomers say the water vapor is pouring down from the system's natal cloud and smacking into a dusty disk where planets are thought to form.

The observations provide the first direct look at how water, an essential ingredient for life as we know it, begins to make its way into planets, possibly even rocky ones like our own.

"For the first time, we are seeing water being delivered to the region where planets will most likely form," said Dan Watson of the University of Rochester, N.Y. Watson is the lead author of a paper about this "steamy" young star system, appearing in the Aug. 30 issue of Nature.

The star system, called NGC 1333-IRAS 4B, is still growing inside a cool cocoon of gas and dust. Within this cocoon, circling around the embryonic star, is a burgeoning, warm disk of planet-forming materials. The new Spitzer data indicate that ice from the stellar embryo's outer cocoon is falling toward the forming star and vaporizing as it hits the disk.

"On Earth, water arrived in the form of icy asteroids and comets. Water also exists mostly as ice in the dense clouds that form stars," said Watson. "Now we've seen that water, falling as ice from a young star system's envelope to its disk, actually vaporizes on arrival. This water vapor will later freeze again into asteroids and comets."

Water is abundant throughout our universe. It has been detected in the form of ice or gas around various types of stars, in the space between stars, and recently Spitzer picked up the first clear signature of water vapor on a hot, gas planet outside our solar system, named HD 189733b.

In the new Spitzer study, water also serves as an important tool for studying long-sought details of the planet formation process. By analyzing what's happening to the water in NGC 1333-IRAS 4B, the astronomers are learning about its disk. For example, they calculated the disk's density (at least 10 billion hydrogen molecules per cubic centimeter or 160 billion hydrogen molecules per cubic inch); its dimensions (a radius bigger than the average distance between Earth and Pluto); and its temperature (170 Kelvin, or minus 154 degrees Fahrenheit).

"Water is easier to detect than other molecules, so we can use it as a probe to look at more brand-new disks and study their physics and chemistry," said Watson. "This will teach us a lot about how planets form."

Watson and his colleagues studied 30 of the youngest known stellar embryos using Spitzer's infrared spectrograph, an instrument that splits infrared light open into a rainbow of wavelengths, revealing "fingerprints" of molecules. Of the 30 stellar embryos, they found only one, NGC 1333-IRAS 4B, with a whopping signature of water vapor. This vapor is readily detectable by Spitzer, because as ice hits the stellar embryo's planet-forming disk, it heats up very rapidly and glows with infrared light.

Why did only one stellar embryo of 30 show signs of water? The astronomers say this is most likely because NGC 1333-IRAS 4B is in just the right orientation for Spitzer to view its dense core. Also, this particular watery phase of a star's life is short-lived and hard to catch.

"We have captured a unique phase of a young star's evolution, when the stuff of life is moving dynamically into an environment where planets could form," said Michael Werner, project scientist for the Spitzer mission at NASA's Jet Propulsion Laboratory, Pasadena, Calif.

NGC 1333-IRAS 4B is located in a pretty star-forming region approximately 1,000 light-years away in the constellation Perseus. Its central stellar embryo is still "feeding" off the material collapsing around it and growing in size. At this early stage, astronomers cannot tell how large the star will ultimately become.

JPL manages the Spitzer Space Telescope mission for NASA's Science Mission Directorate, Washington. Science operations are conducted at the Spitzer Science Center at the California Institute of Technology in Pasadena. Caltech manages JPL for NASA. Spitzer's infrared spectrograph was built by Cornell University. Its development was led by co-author Houck. Watson and Forrest are also members of the team that built the spectrograph.