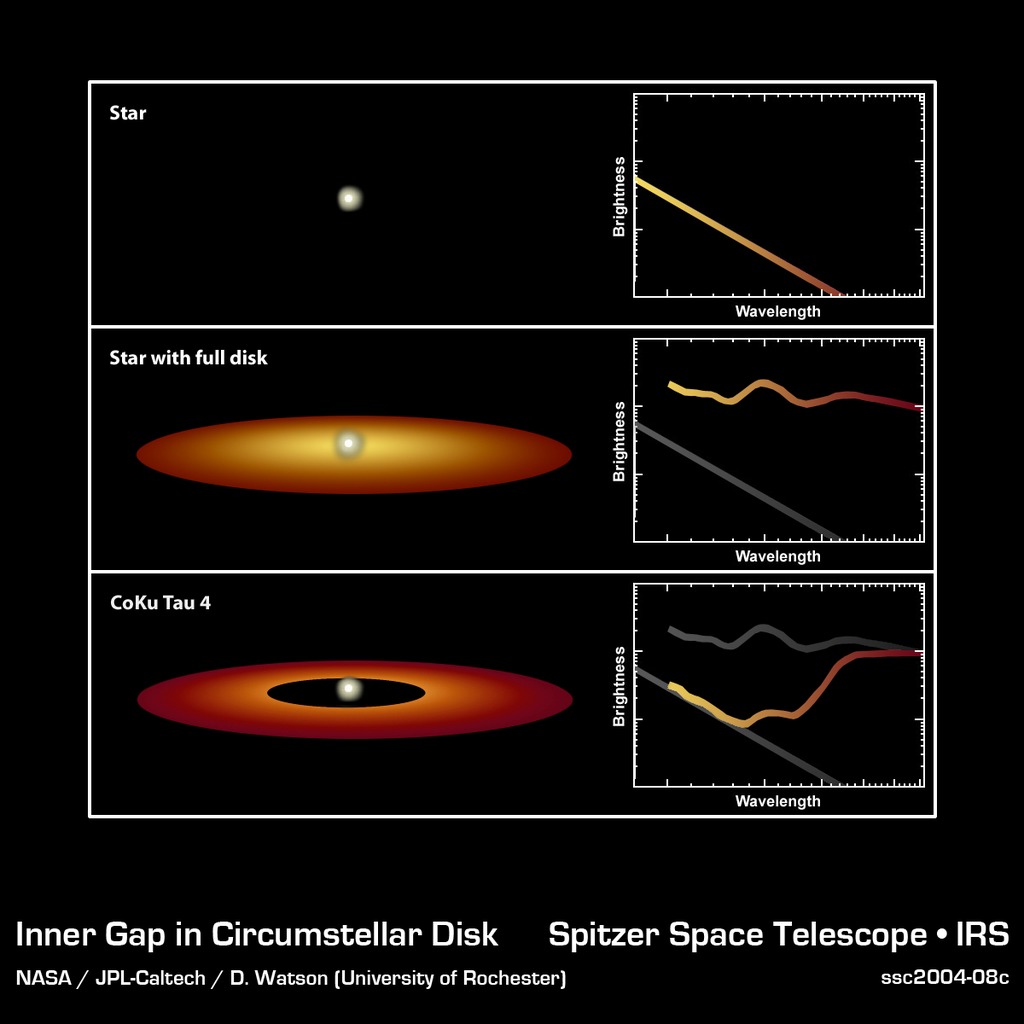 How can you tell if a star has a protoplanetary disk around it, when the disk is too small to image directly? Using the technique of spectroscopy, scientists can deduce the temperature and chemical composition of material around a star, even if they cannot see the disk itself. Spectroscopy involves spreading the light from a star into a spectrum (in visible light, we are familiar with white light being spread out into a rainbow when it passes through a prism), and then measuring exactly how much light is present in each wavelength. The top illustration represents the spectrum of a star with no circumstellar disk or other surrounding material. The distribution of light at any given wavelength follows a specific and well-known line, determined by the laws of physics and the temperature of the star. In the case of a star, most of the light is produced at shorter wavelengths (the left side of the diagram), due to the high temperature of the star's surface. Moving to the right-hand side of the diagram, the wavelengths increase to lower energies (indicating lower temperatures) and, the starlight drops off.

In the second diagram, we see the spectrum of a star with a disk of dust and gas around it. The warm dust and gas disk around the star produces its own infrared light, which changes the shape of the spectrum. The circumstellar material is cooler than the surface of the star, so it emits most of its light at longer infrared wavelengths, closer to the right-hand side of the diagram. Now, there is an excess of infrared emission, which can not be coming from the star itself. The disk is revealed.

Going a step further, in the third diagram we see the spectrum of a star with a circumstellar disk around it, but in this case, the inner part of the disk has been swept away, perhaps by the formation of a planet. The dust closest to the star was also the hottest, so its absence means that there is less emission from the disk at higher temperatures. The only dust producing infrared light is much cooler than the star, and radiates only at long wavelengths. This low temperature "bump" on the spectrum indicates a disk with a missing center, and may be the first clue that planets have formed inside the disk.