This artist's concept of Tempel 1 illustrates the comet's shape, reflectivity, rotation rate and surface temperature, based on information from NASA's Hubble Space Telescope and Spitzer Space Telescope. Measurements from the Great Observatories indicate that the comet is a matte black object roughly 14 by 4 kilometers (8.7 by 2.5 miles), or about one-half the size of Manhattan. It rotates about once every 41 hours. The sunlit side of the nucleus is glowing warmly, and the nightside is about the temperature of deep space.

At the time of these early observations, March 25-27, 2005,Tempel 1 was still far enough away from the Sun that it had not yet developed its characteristic halo of evaporating gas.

Hubble and Spitzer observed the comet in visible and infrared light, respectively. The comet appeared only as an unresolved dot due to the great distance, but its general shape, size and color could be deduced from the way the visible and infrared brightness varied over time.

The animation simulates an optical view of the comet, followed by its appearance in infrared. Spitzer detects the comet's infrared energy or heat, depicted by the reddish glow. The movement of the comet has been dramatically sped up to 13 seconds per rotation versus its normal rotation of about 40 hours. As the comet slowly rotates, the sunlit side heats up while the dark side cools down. 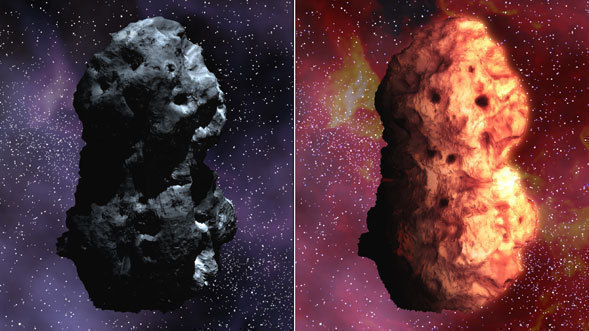 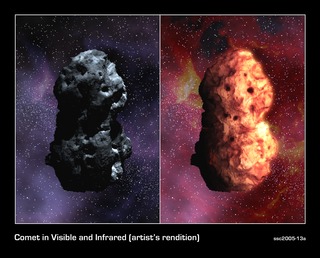 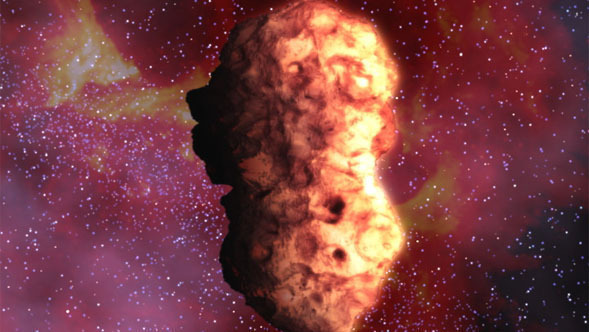