NASA's new Spitzer Space Telescope has captured in stunning detail the spidery filaments and newborn stars of the Tarantula Nebula, a rich star-forming region also known as 30 Doradus. In this animation the infrared structures seen by this new observatory are compared with a visible light image from the ground-based European Southern Observatory (ESO) to highlight the power of Spitzer to see what other telescopes cannot.

Starting with the ESO visible-light image, the spider-like filaments that inspired this nebula's name fill the view. The pinkish color in this image originates from the gas, mostly hydrogen heated to high temperatures by the many brilliant young stars. Dark swaths cutting through this region suggest the sooty, dense dust clouds that fuel star formation.

Zooming into one dust lane at the upper right side of the nebula, the transition to the infrared view reveals a streamer of bright red emission from a visually dark cloud. Here, and throughout the nebula, these red filaments reveal the presence of molecular material thought to be rich in hydrocarbons, a Spitzer finding highlighting a previously unseen aspect of this nebula. Green indicate the hottest regions of gas, coming from the same hydrogen gas that produces the visible light.

Moving down and around the heart of the Tarantula, the lower cavity of the nebula moves into view. Dense pillars of gas line the edge of this opening, looking almost like teeth around a mouth. In visible light the outer surfaces of these pillars glow brilliantly while the infrared view reveals a more complex structure. The green outer surfaces trace the surrounding hot gas while red filaments expose the dense, buried cloud cores, almost like a dentist's X-ray probing hidden roots within the teeth.

Finally, pulling back to see the entire nebula, the striking differences and similarities between the visible and infrared images are clear. By expanding our view beyond the limits of visible light we can see otherwise invisible dust clouds and hidden stars that greatly enhance our understanding of the Tarantula Nebula. 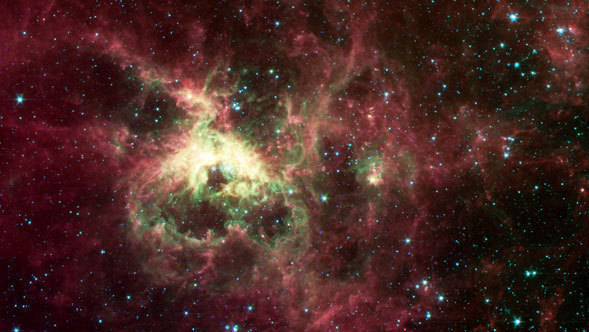 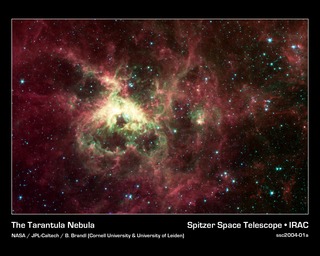 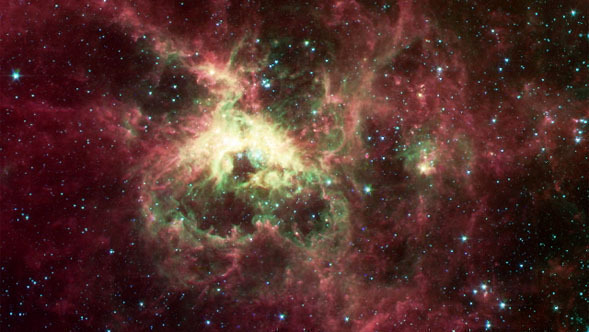