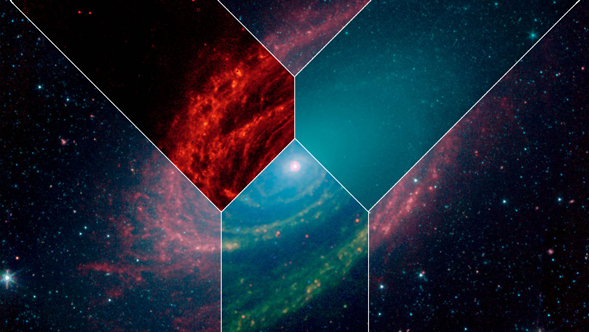 NASA launched its Spitzer Space Telescope into orbit around the Sun on Aug. 25, 2003. Since then, the observatory has been lifting the veil on the wonders of the cosmos, from our own solar system to faraway galaxies, using infrared light.

Managed by NASA's Jet Propulsion Laboratory in Pasadena, California, Spitzer enabled scientists to confirm the presence of seven rocky, Earth-size planets in the TRAPPIST-1 system. The telescope has also provided weather maps of hot, gaseous exoplanets and revealed a hidden ring around Saturn. It has illuminated hidden collections of dust in a wide variety of locations, including cosmic nebulas (clouds of gas and dust in space), where young stars form, and swirling galaxies. Spitzer has additionally investigated some of the universe's oldest galaxies and stared at the black hole at the center of the Milky Way.

Spitzer's primary mission lasted five-and-a-half years and ended when it ran out of the liquid helium coolant necessary to operate two of its three instruments. But its passive-cooling design has allowed part of its third instrument to continue operating for more than 10 additional years. The mission is scheduled to end on Jan. 30, 2020.

In honor of Spitzer's Sweet 16 in space, here are 16 amazing images from the mission. 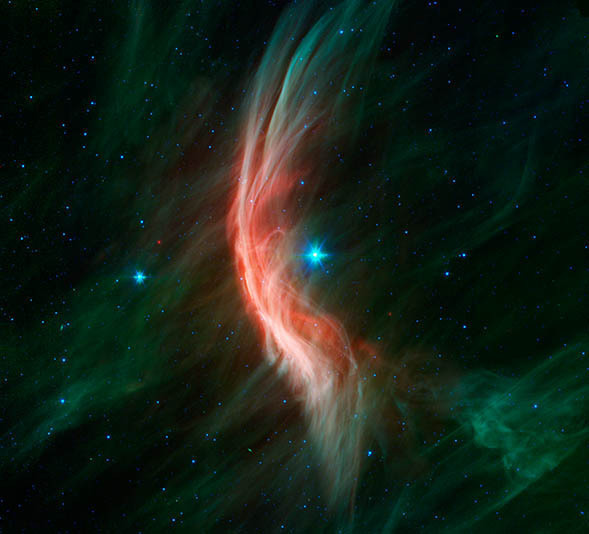 Giant Star Makes Waves
This Spitzer image shows the giant star Zeta Ophiuchi and the bow shock, or shock wave, in front of it. Visible only in infrared light, the bow shock is created by winds that flow from the star, making ripples in the surrounding dust. Located roughly 370 light-years from Earth, Zeta Ophiuchi dwarfs our Sun: It is about six times hotter, eight times wider, 20 times more massive and about 80,000 times as bright. Even at its great distance, it would be one of the brightest stars in the sky were it not largely obscured by dust clouds. 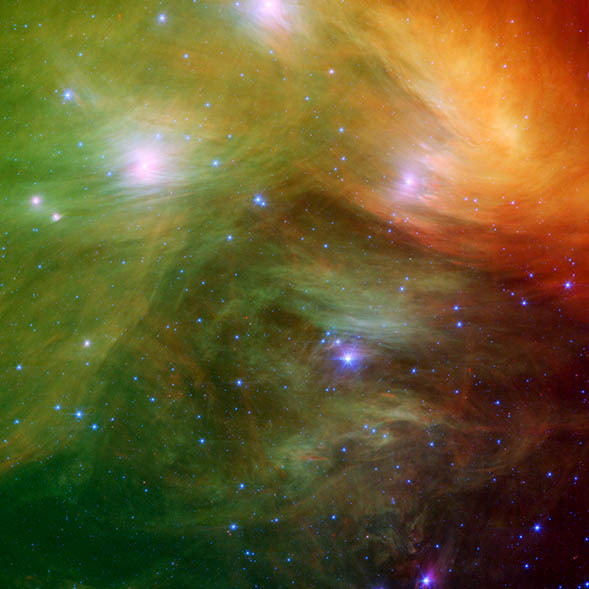 The Seven Sisters Pose for Spitzer
The Pleiades star cluster, also known as the Seven Sisters, is a frequent target for night sky observers. This image from Spitzer zooms in on a few members of the sisterhood. Viewed in the infrared, the stars seem to float on a bed of feathers. The filaments surrounding the stars are dust, and the three colors represent different wavelengths of infrared light. The densest portion of the dust cloud appears in yellow and red, and the more diffuse outskirts appear in green hues.

Young Stars in Their Baby Blanket of Dust
Newborn stars peek out from beneath their blanket of dust in this image of the Rho Ophiuchi nebula. Called "Rho Oph" by astronomers and located about 400 light-years from Earth, it's one of the closest star-forming regions to our own solar system. 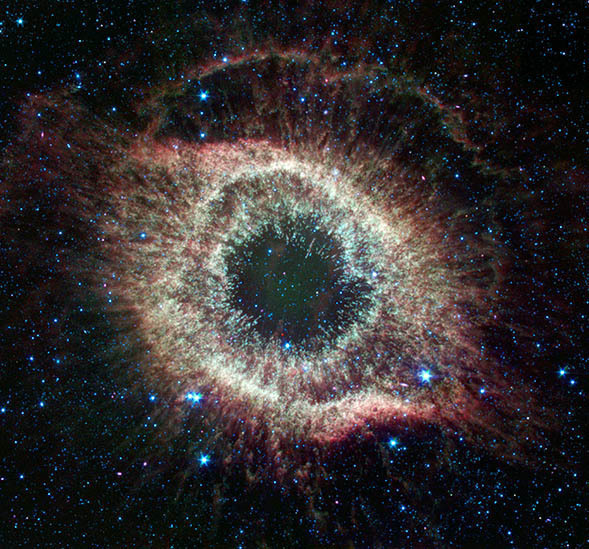 The Infrared Helix
Located about 700 light-years from Earth, the eye-like Helix nebula is a planetary nebula, or the remains of a Sun-like star. When these stars run out of their internal fuel supply, their outer layers puff up to create the nebula. The nebula is heated by the hot core of the dead star, called a white dwarf, which is not visible in this image but is located in the middle of the "eye." Our Sun will blossom into a planetary nebula when it dies in about 5 billion years. 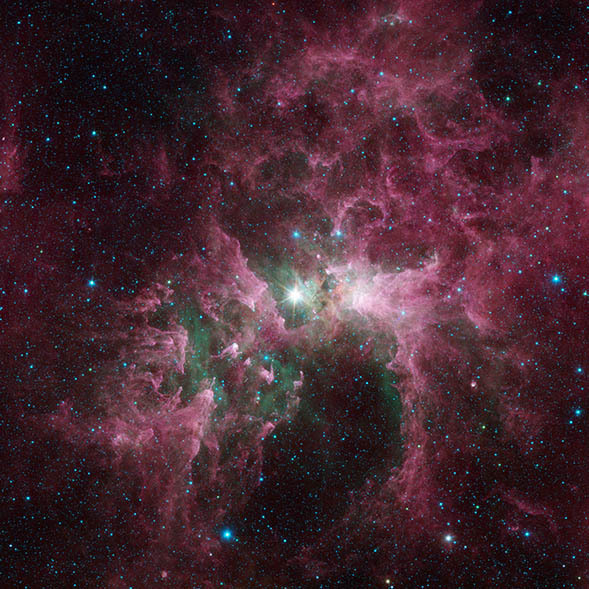 The Tortured Clouds of Eta Carinae
The bright star at the center of this image is Eta Carinae, one of the most massive stars in the Milky Way galaxy. With around 100 times the mass of the Sun and at least 1 million times the brightness, Eta Carinae releases a tremendous outflow of energy that has eroded the surrounding nebula. Spitzer's infrared vision lets us see the dust, shown in red, as well as clouds of hot, glowing gas, which appear green. 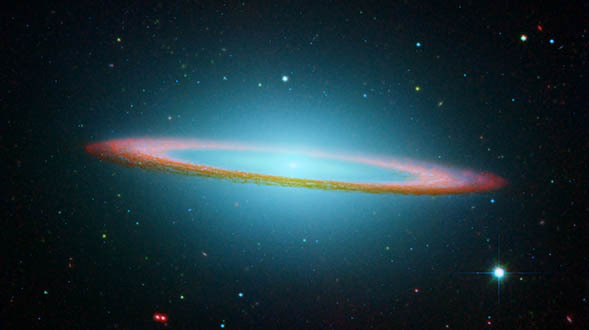 Spitzer Spies Spectacular Sombrero
Located 28 million light-years from Earth, Messier 104 — also called the Sombrero galaxy or M104 — is notable for its nearly edge-on orientation as seen from our planet. Spitzer observations were the first to reveal the smooth, bright ring of dust (seen in red) circling the galaxy. Spitzer's full view also shows the disk is warped, often the result of a gravitational encounter with another galaxy, and clumpy areas spotted in the far edges of the ring indicate young star-forming regions. Hubble Space Telescope data showing starlight appears blue. 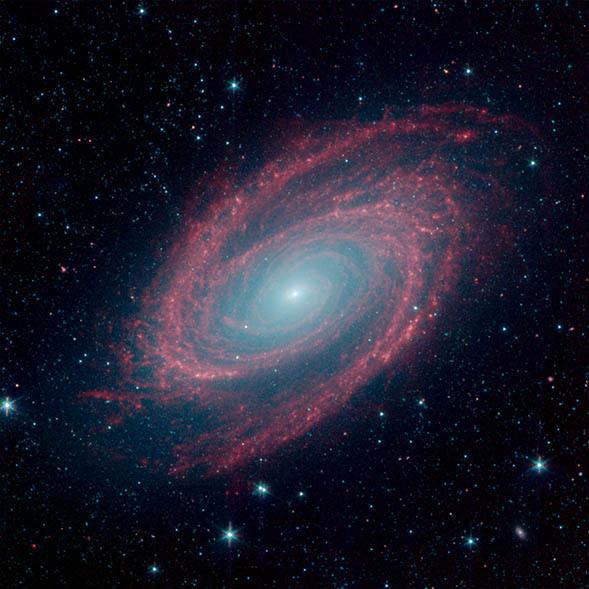 Spiral Galaxy Messier 81
This infrared image of the galaxy Messier 81, or M81, reveals lanes of dust illuminated by active star formation throughout the galaxy's spiral arms. By moving the slider all the way to the left in order to remove the bluish-white light from stars, you can see the dust lanes more clearly. Located in the northern constellation of Ursa Major (which includes the Big Dipper), M81 is also about 12 million light-years from Earth. 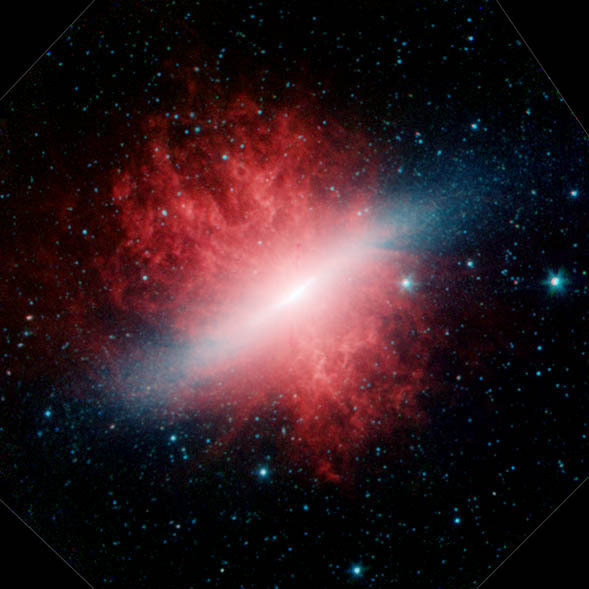 Spitzer Reveals Stellar Smoke
Messier 82 — also known as the Cigar galaxy or M82 — is a hotbed of young, massive stars. In visible light, it appears as a diffuse bar of blue light, but in this infrared image, scientists can see huge red clouds of dust blown out into space by winds and radiation from those stars. Messier 82 is located about 12 million light-years away in the Ursa Major constellation. 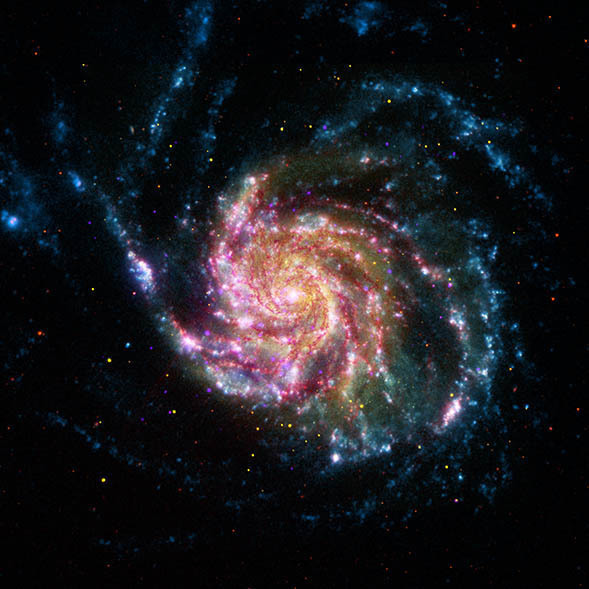 A Pinwheel Galaxy Rainbow
This image of Messier 101, also known as the Pinwheel Galaxy or M101, combines data in the infrared, visible, ultraviolet and X-rays from Spitzer and three other NASA space telescopes: Hubble, the Galaxy Evolution Explorer's Far Ultraviolet detector (GALEX) and the Chandra X-Ray Observatory. The galaxy is about 70% larger than our own Milky Way, with a diameter of about 170,000 light-years, and sits at a distance of 21 million light-years from Earth. 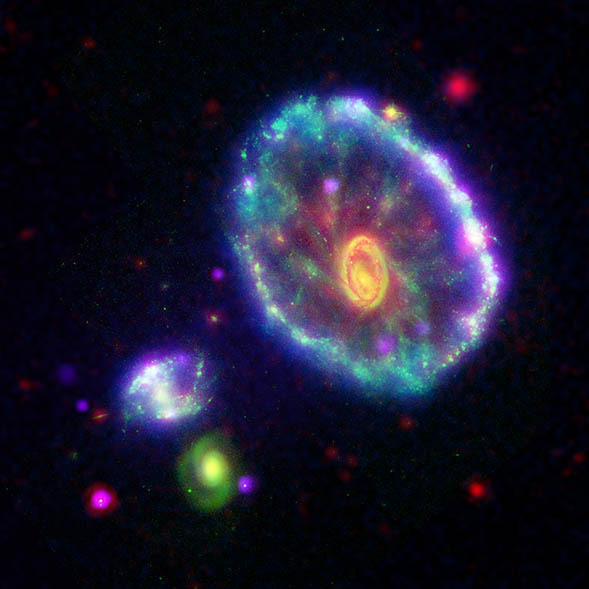 Cartwheel Galaxy Makes Waves
Approximately 100 million years ago, a smaller galaxy plunged through the heart of the Cartwheel galaxy, creating ripples of brief star formation. As with the Pinwheel galaxy above, this composite image includes data from NASA's Spitzer, Hubble, GALEX and Chandra observatories. 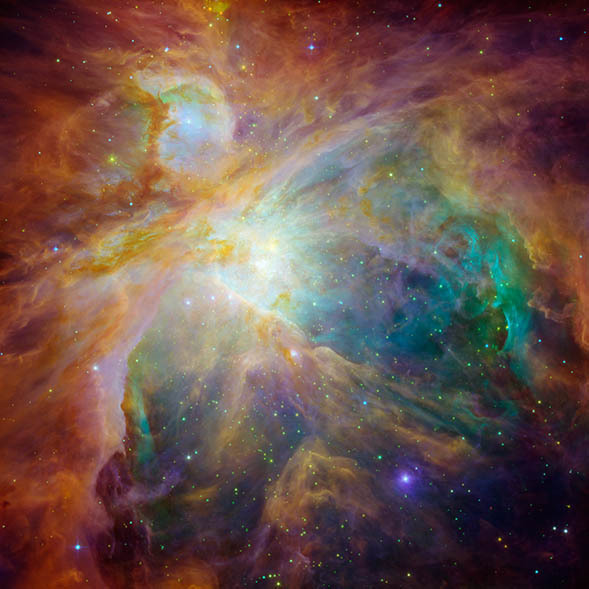 Spitzer and Hubble Create Colorful Masterpiece
Located 1,500 light-years from Earth, the Orion nebula is the brightest spot in the sword of the constellation Orion. Both NASA's Spitzer and Hubble space telescopes contributed to this vibrant image. Four massive stars, collectively called the Trapezium, appear as a yellow smudge near the image center. Visible and ultraviolet data from Hubble appear as swirls of green that indicate the presence of gas heated by intense ultraviolet radiation from the Trapezium's stars. Less-embedded stars appear as specks of green, and foreground stars as blue spots. Meanwhile, Spitzer's infrared view exposes carbon-rich molecules called polycyclic aromatic hydrocarbons, shown here as wisps of red and orange. Orange-yellow dots are infant stars deeply embedded in cocoons of dust and gas. 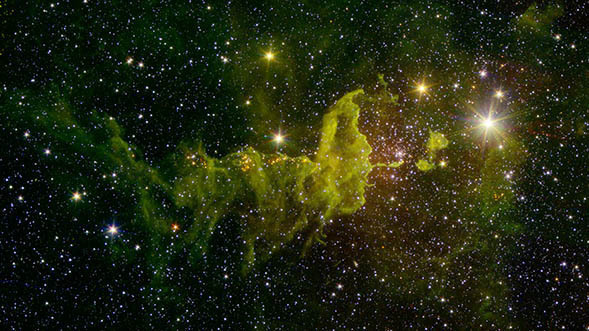 A Space Spider Watches Over Young Stars
Located about 10,000 light-years from Earth in the constellation Auriga, the Spider nebula resides in the outer part of the Milky Way. Combining data from Spitzer and the Two Micron All Sky Survey (2MASS), the image shows green clouds of dust illuminated by star formation in the region. Right of center, against the black background of space, lies a bright group of stars called Stock 8. The radiation from this cluster carves out a bowl in the nearby dust clouds. Running in a tributary to the left of Stock 8 are more young stars that appear as red point sources. 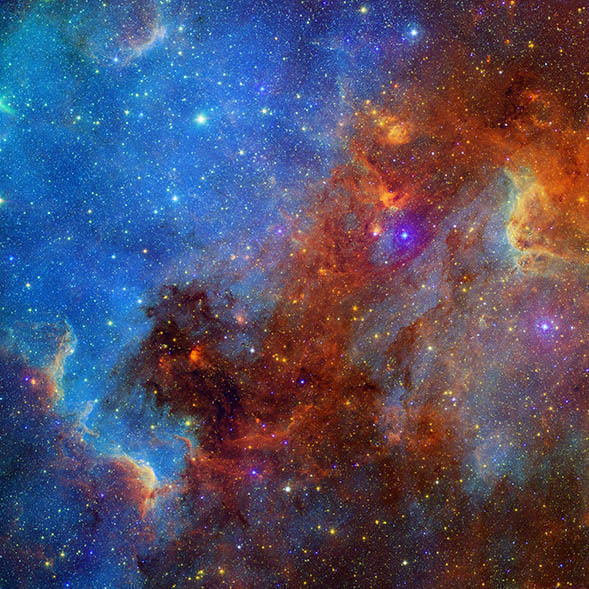 North America Nebula in Different Lights
This view of the North America nebula combines visible light collected by the Digitized Sky Survey with infrared light from NASA's Spitzer Space Telescope. Blue hues represent visible light, while infrared is displayed as red and green. Clusters of young stars (about 1 million years old) can be found throughout the image. Slightly older but still very young stars (about 3 to 5 million years) are also liberally scattered across the complex. 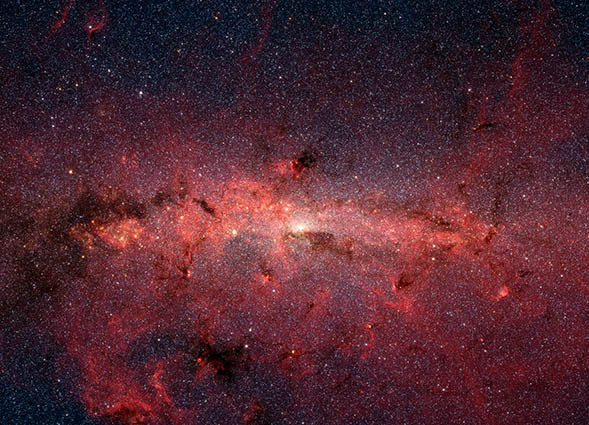 Spitzer Captures Our Galaxy's Bustling Center
This infrared mosaic offers a stunning view of the Milky Way galaxy's busy center. The pictured region, located in the Sagittarius constellation, is 900 light-years agross and shows hundreds of thousands of mostly old stars amid clouds of glowing dust lit up by younger, more massive stars. Our Sun is located 26,000 light-years away in a more peaceful, spacious neighborhood, out in the galactic suburbs. The bright core in the middle of the image is a dense cluster of stars at the center of the Milky Way, within which lurks a black hole about 4 million times more massive than our Sun. 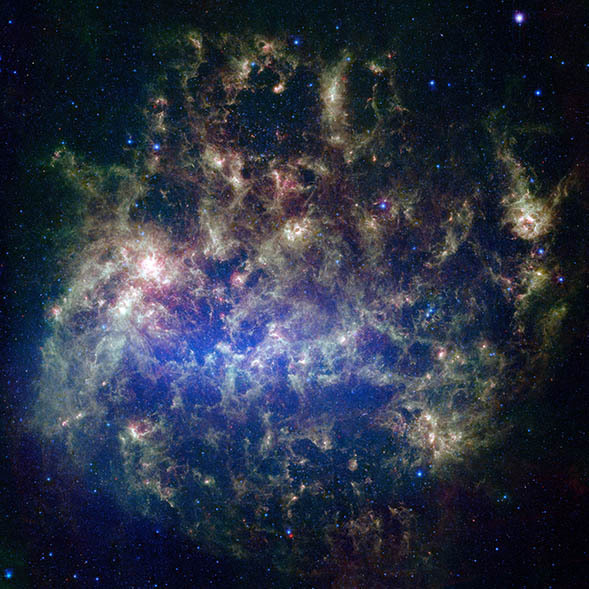 The Eternal Life of Stardust
The Large Magellanic Cloud, a dwarf galaxy located about 160,000 light-years from Earth, looks like a choppy sea of dust in this infrared portrait. The blue color, seen most prominently in the central bar, represents starlight from older stars. The chaotic, bright regions outside this bar are filled with hot, massive stars buried in thick blankets of dust. The red color around these bright regions is from dust heated by stars, while the red dots scattered throughout the picture are either dusty, old stars; young stars newly forming; or more distant galaxies. The greenish clouds contain cooler interstellar gas and molecule-size dust grains illuminated by ambient starlight.

A Stellar Family Portrait
In this large celestial mosaic from Spitzer, there's a lot to see, including multiple clusters of stars born from the same dense clumps of gas and dust. Some of these clusters are older than others and more evolved, making this a generational stellar portrait. 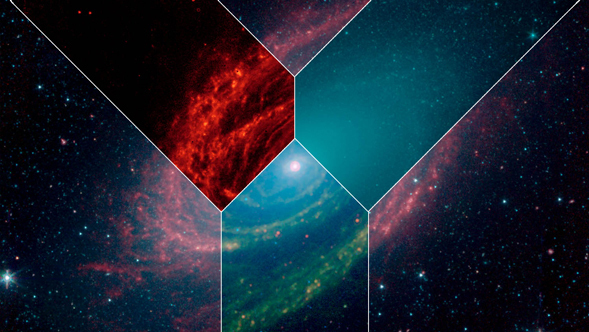 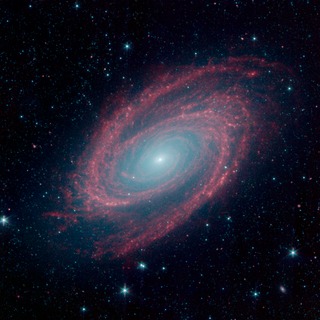 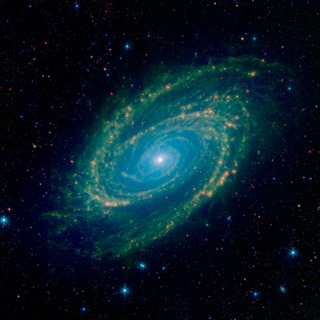 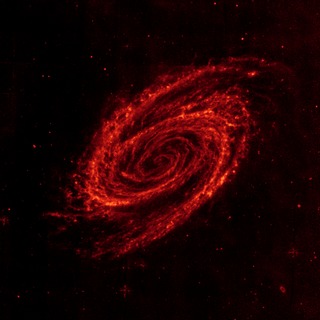 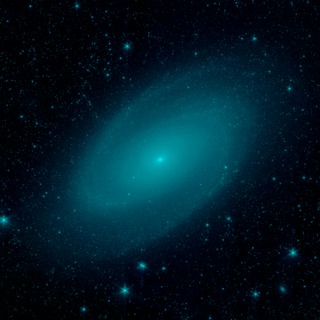