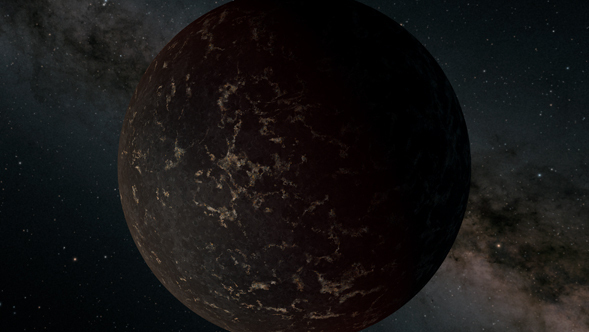 A new study using data from NASA's Spitzer Space Telescope provides a rare glimpse of conditions on the surface of a rocky planet orbiting a star beyond the Sun. The study, published today in the journal Nature, shows that the planet's surface may resemble those of Earth's Moon or Mercury: The planet likely has little to no atmosphere and could be covered in the same cooled volcanic material found in the dark areas of the Moon's surface, called mare.

Discovered in 2018 by NASA's Transiting Exoplanet Satellite Survey (TESS) mission, planet LHS 3844b is located 48.6 light-years from Earth and has a radius 1.3 times that of Earth. It orbits a small, cool type of star called an M dwarf - especially noteworthy because, as the most common and long-lived type of star in the Milky Way galaxy, M dwarfs may host a high percentage of the total number of planets in the galaxy.

TESS found the planet via the transit method, which involves detecting when the observed light of a parent star dims because of a planet orbiting between the star and Earth. Detecting light coming directly from a planet's surface - another method - is difficult because the star is so much brighter and drowns out the planet's light.

But during follow-up observations, Spitzer was able to detect light from the surface of LHS 3844b. The planet makes one full revolution around its parent star in just 11 hours. With such a tight orbit, LHS 3844b is most likely "tidally locked," which is when one side of a planet permanently faces the star. The star-facing side, or dayside, is about 1,410 degrees Fahrenheit (770 degrees Celsius). Being extremely hot, the planet radiates a lot of infrared light, and Spitzer is an infrared telescope. The planet's parent star is relatively cool (though still much hotter than the planet), making direct observation of LHS 3844b's dayside possible.

This observation marks the first time Spitzer data have been able to provide information about the atmosphere of a terrestrial world around an M dwarf.

The Search for Life

By measuring the temperature difference between the planet's hot and cold sides, the team found that there is a negligible amount of heat being transferred between the two. If an atmosphere were present, hot air on the dayside would naturally expand, generating winds that would transfer heat around the planet. On a rocky world with little to no atmosphere, like the Moon, there is no air present to transfer heat.

"The temperature contrast on this planet is about as big as it can possibly be," said Laura Kreidberg, a researcher at the Harvard and Smithsonian Center for Astrophysics in Cambridge, Massachusetts, and lead author of the new study. "That matches beautifully with our model of a bare rock with no atmosphere."

Understanding the factors that could preserve or destroy planetary atmospheres is part of how scientists plan to search for habitable environments beyond our solar system. Earth's atmosphere is the reason liquid water can exist on the surface, enabling life to thrive. On the other hand, the atmospheric pressure of Mars is now less than 1% of Earth's, and the oceans and rivers that once dotted the Red Planet's surface have disappeared.

"We've got lots of theories about how planetary atmospheres fare around M dwarfs, but we haven't been able to study them empirically," Kreidberg said. "Now, with LHS 3844b, we have a terrestrial planet outside our solar system where for the first time we can determine observationally that an atmosphere is not present."

Compared to Sun-like stars, M dwarfs emit high levels of ultraviolet light (though less light overall), which is harmful to life and can erode a planet's atmosphere. They're particularly violent in their youth, belching up a large number of flares, or bursts of radiation and particles that could strip away budding planetary atmospheres.

The Spitzer observations rule out an atmosphere with more than 10 times the pressure of Earth's. (Measured in units called bars, Earth's atmospheric pressure at sea level is about 1 bar.) An atmosphere between 1 and 10 bars on LHS 3844b has been almost entirely ruled out as well, although the authors note there's a slim chance it could exist if the stellar and planetary properties were to meet some very specific and unlikely criteria. They also argue that with the planet so close to a star, a thin atmosphere would be stripped away by the star's intense radiation and outflow of material (often called stellar winds).

"I'm still hopeful that other planets around M dwarfs could keep their atmospheres," Kreidberg said. "The terrestrial planets in our solar system are enormously diverse, and I expect the same will be true for exoplanet systems."

Spitzer and NASA's Hubble Space Telescope have previously gathered information about the atmospheres of multiple gas planets, but LHS 3844b appears to be the smallest planet for which scientists have used the light coming from its surface to learn about its atmosphere (or lack thereof). Spitzer previously used the transit method to study the seven rocky worlds around the TRAPPIST-1 star (also an M dwarf) and learn about their possible overall composition; for instance, some of them likely contain water ice.

The authors of the new study went one step further, using LHS 3844b's surface albedo (or its reflectiveness) to try to infer its composition.

The Nature study shows that LHS 3844b is "quite dark," according to co-author Renyu Hu, an exoplanet scientist at NASA's Jet Propulsion Laboratory in Pasadena, California, which manages the Spitzer Space Telescope. He and his co-authors believe the planet is covered with basalt, a kind of volcanic rock. "We know that the mare of the Moon are formed by ancient volcanism," Hu said, "and we postulate that this might be what has happened on this planet."

JPL manages the Spitzer Space Telescope mission for NASA's Science Mission Directorate in Washington. Science operations are conducted at the Spitzer Science Center at Caltech in Pasadena. Space operations are based at Lockheed Martin Space in Littleton, Colorado. Data are archived at the Infrared Science Archive housed at IPAC at Caltech. Caltech manages JPL for NASA. 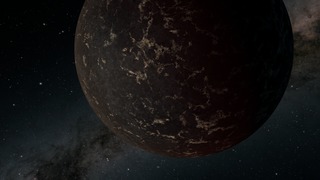 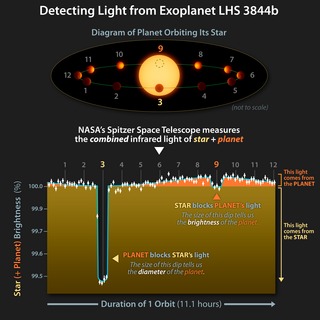 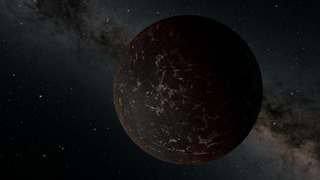 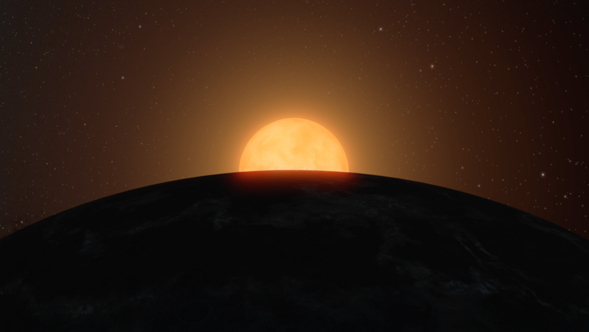 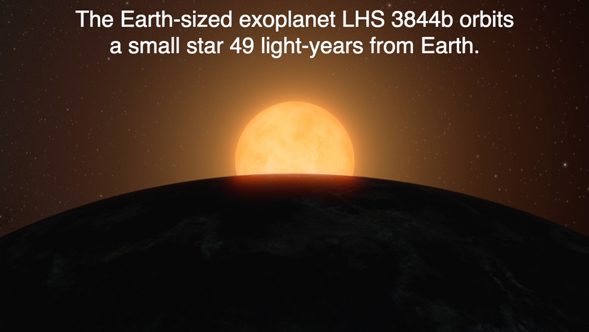