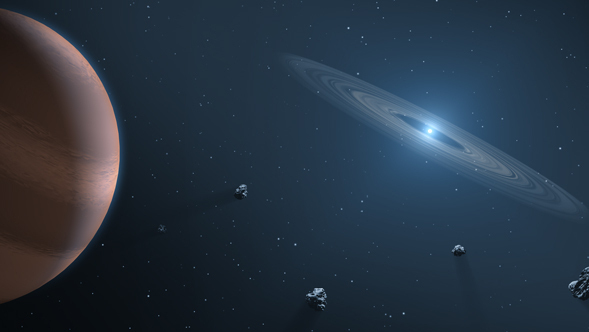 Beneath an elegant office building with a Spanish-style red tiled roof in Pasadena, California, three timeworn storerooms safeguard more than a century of astronomy. Down the stairs and to the right is a basement of wonder. There are countless wooden drawers and boxes, stacked floor to ceiling, with telescope plates, sunspot drawings and other records. A faint ammonia-like smell, reminiscent of old film, fills the air.

Guarding one storeroom is a short black door with a sign saying "This door to be kept closed."

Carnegie Observatories hosts 250,000 photographic plates taken at Mount Wilson, Palomar and Las Campanas observatories, spanning more than 100 years. In their heydays, the Mount Wilson 60-inch and 100-inch telescopes -- the bigger saw its first light on Nov. 1, 1917 -- were the most powerful instruments of their kind. Each indelibly changed humanity's understanding of our place in the cosmos. But these technological marvels were ahead of their time -- in one case, capturing signs of distant worlds that wouldn't be recognized for a century.

Mount Wilson is the site where some of the key discoveries about our galaxy and universe were made in the early 20th century. This is where Edwin Hubble realized that the Milky Way cannot be the extent of our universe, because Andromeda (or M31) is farther away than the most distant reaches of our galaxy. The photographic plate from the 100-inch Hooker Telescope from 1923, which captured this monumental realization, is blown up as a huge poster outside the Carnegie storerooms.

Hubble and Milton Humason, whose Mount Wilson career began as a janitor, worked together to explore the expanding nature of the universe. Using the legendary telescopes, as well as data from Lowell Observatory in Flagstaff, Arizona, they recognized that clusters of galaxies are traveling away from each other -- and the more distant galaxies move away from each other at greater speeds.

But there is a far lesser known, 100-year-old discovery from Mount Wilson, one that was unidentified and unappreciated until recently. It's actually: The first evidence of exoplanets.

It started with Ben Zuckerman, professor emeritus of astronomy at the University of California, Los Angeles. He was preparing a talk about the compositions of planets and smaller rocky bodies outside our solar system for a July 2014 symposium at the invitation of Jay Farihi, whom he had helped supervise when Farihi was a graduate student at UCLA. Farihi had suggested that Zuckerman talk about the pollution of white dwarfs, which are faint, dead stars composed of mainly hydrogen and helium. By "pollution," astronomers mean heavy elements invading the photospheres -- the outer atmospheres -- of these stars. The thing is, all those extra elements shouldn't be there -- the strong gravity of the white dwarf should pull the elements into the star's interior, and out of sight.

The first polluted white dwarf identified is called van Maanen's Star (or "van Maanen 2" in the scientific literature), after its discoverer Adriaan van Maanen. Van Maanen found this object in 1917 by spotting its subtle motion relative to other stars between 1914 and 1917. Astronomer Walter Sydney Adams, who would later become director of Mount Wilson, captured the spectrum -- a chemical fingerprint -- of van Maanen's Star on a small glass plate using Mount Wilson's 60-inch telescope. Adams interpreted the spectrum to be of an F-type star, presumably based on the presence and strength of calcium and other heavy-element absorption features, with a temperature somewhat higher than our Sun. In 1919, van Maanen called it a "very faint star."

Today, we know that van Maanen's Star, which is about 14 light-years away, is the closest white dwarf to Earth that is not part of a binary system.

"This star is an icon," Farihi said recently. "It is the first of its type. It's really the proto-prototype."

While preparing his talk, Zuckerman had what he later called a "true 'eureka' moment." Van Maanen's Star, unbeknownst to the astronomers who studied it in 1917 and those who thought about it for decades after, must be the first observational evidence that exoplanets exist.

What does this have to do with exoplanets?

Heavy elements in the star's outermost layer could not have been produced inside the star, because they would immediately sink due to the white dwarf's intense gravitational field. As more white dwarfs with heavy elements in their photospheres were discovered in the 20th century, scientists came to believe that the exotic materials must have come from the interstellar medium -- in other words, elements floating in the space between the stars.

But in 1987, more than 70 years after the Mount Wilson spectrum of van Maanen's Star, Zuckerman and his colleague Eric Becklin reported an excess of infrared light around a white dwarf, which they thought might come from a faint "failed star" called a brown dwarf. This was, in 1990, interpreted to be a hot, dusty disk orbiting a white dwarf. By the early 2000s, a new theory of polluted white dwarfs had emerged: Exoplanets could push small rocky bodies toward the star, whose powerful gravity would pulverize them into dust. That dust, containing heavy elements from the torn-apart body, would then fall on the star.

"The bottom line is: if you're an asteroid or comet, you can't just change your address. You need something to move you," Farihi said. "By far, the greatest candidates are planets to do that."

NASA's Spitzer Space Telescope has been instrumental in expanding the field of polluted white dwarfs orbited by hot, dusty disks. Since launch in 2004, Spitzer has confirmed about 40 of these special stars. Another space telescope, NASA's Wide-field Infrared Survey Explorer, also detected a handful, bringing the total up to about four dozen known today. Because these objects are so faint, infrared light is crucial to identifying them.

Supporting the new "dusty disk" theory of polluted white dwarfs, in 2007, Zuckerman and colleagues published observations of a white dwarf atmosphere with 17 elements -- materials similar to those found in the Earth-Moon system. (The late UCLA professor Michael Jura, who made crucial contributions to the study of polluted white dwarfs, was part of this team.) This was further evidence that at least one small, rocky body -- or even a planet -- had been torn apart by the gravity of a white dwarf. Scientists now generally agree that a single white dwarf star with heavy elements in its spectrum likely has at least one rocky debris belt -- the remnants of bodies that collided violently and never formed planets -- and probably at least one major planet.

So, heavy elements that happened to be floating in the interstellar medium could not account for the observations. "About 90 years after van Maanen's discovery, astronomers said, 'Whoa, this interstellar accretion model can't possibly be right,'" Zuckerman said.

Inspired by Zuckerman, Farihi became enamored with the idea that someone had taken a spectrum with the first evidence of exoplanets in 1917, and that a record must exist of that observation. "I got my teeth in the question and I wouldn't let go," he said.

Farihi reached out to the Carnegie Observatories, which owns the Mount Wilson telescopes and safeguards their archives. Carnegie Director John Mulchaey put volunteer Dan Kohne on the case. Kohne dug through the archives and, two days later, Mulchaey sent Farihi an image of the spectrum.

"I can't say I was shocked, frankly, but I was pleasantly blown out of my seat to see that the signature was there, and could be seen even with the human eye," Farihi said.

The spectrum of van Maanen's Star that Farihi had requested is now located in a small archival sleeve, labeled with the handwritten date "1917 Oct 24" and a modern yellow sticky note: "possibly 1st record of an exoplanet."

Cynthia Hunt, an astronomer who serves as chair of Carnegie's history committee, took the glass plate out of the envelope and placed it onto a viewer that lit it up. The spectrum itself just about 1/6th of an inch, or a bit over 0.4 centimeters.

Though the plate seems unremarkable at first glance, Farihi saw two obvious "fangs" representing dips in the spectrum. To him, this was the smoking gun: Two absorption lines from the same calcium ion, meaning there were heavy elements in the photosphere of the white dwarf -- indicating it likely has at least one exoplanet. He wrote about it in 2016 in New Astronomy Reviews.

Scientists have long thought the gravity of giant planets could be keeping debris belts in place, especially in young planetary systems. A recent study in The Astrophysical Journal showed that young stars with disks of dust and debris are more likely to have giant planets orbiting at great distance from their parent star than those without disks.

A white dwarf is not a young star -- on the contrary, it forms when a low-to-medium-mass star has already burned all of the fuel in its interior. But the principle is the same: The gravitational pull of giant exoplanets could throw small, rocky bodies into the white dwarfs.

Our own Sun will become a red giant in about 5 billion years, expanding so much it may even swallow Earth before it blows off its outer layers and becomes a white dwarf. At that point, Jupiter's large gravitational influence may be more disruptive to the asteroid belt, flinging objects toward our much-dimmer Sun. This kind of scenario could explain the heavy elements at van Maanen's Star.

Spitzer's observations of van Maanen's Star have not found any planets there so far. In fact, to date, no exoplanets have been confirmed orbiting white dwarfs, although one does have an object thought to be a massive planet. Other compelling evidence has emerged just in the last couple of years. Using the W. M. Keck Observatory in Hawaii, scientists, including Zuckerman, recently announced that they had found evidence of a Kuiper-Belt-like object having been eaten by a white dwarf.

Scientists are still exploring polluted white dwarfs and looking for the exoplanets they may host. About 30 percent of all white dwarfs we know about are polluted, but their debris disks are harder to spot. Jura put forward that with lots of asteroids coming in and colliding with debris, dust may be converted into gas, which would not have the same highly detectable infrared signal as dust.

Farihi was thrilled about how his Mount Wilson archive detective work turned out. In 2016, he described the historical find in the context of a review paper about polluted white dwarfs, arguing that white dwarfs are "compelling targets for exoplanetary system research."

Who knows what other overlooked treasures await discovery in the archives of great observatories -- the sky-watching records of a cosmos rich in subtlety. Surely, other clues will be found by those motivated by curiosity who ask the right questions.

"It's personal interaction with data that can really spur us to get invested in the questions that we're asking," Farihi said.

Read this story with more images at: https://www.jpl.nasa.gov/news/news.php?feature=6991 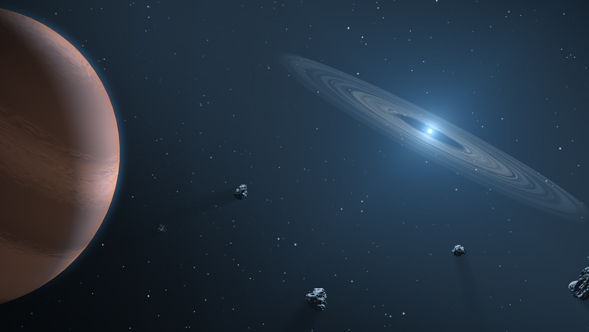 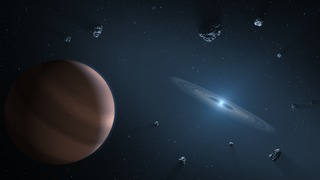