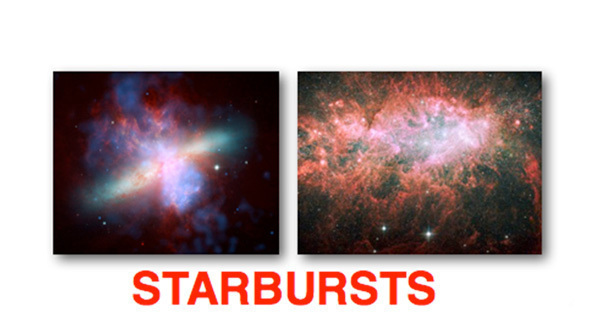 A deep look back to the early universe by NASA's Spitzer Space Telescope has revealed a surprisingly rowdy bunch of galaxies. Within a large galaxy sample observed 1.5 billion years after the Big Bang, Spitzer witnessed around 15 percent of galaxies undergoing bouts of extreme starmaking, called starbursts. The discovery suggests that starbursts—a rare phenomenon in the modern cosmos—were actually relatively common in the past, and played a major role in creating our universe’s stars.

Typically, galaxies go with a take-it-slow approach to starmaking. Over billions of years, that unhurried stellar production has been credited with forging almost all stars in existence. The new findings, however, show starburst galaxies cranking out upwards of half of the total new stars in the cosmic era under study. Moving forward, astronomers will have to ensure galactic evolution theories can account for these more frequent frenzies of starmaking.

"This research shows for the first time that starburst galaxies are much more important than previously thought in the early star formation history of the universe," said Karina Caputi, an associate professor at the University of Groningen in the Netherlands. Caputi is lead author of a new paper describing the results, published on Oct 30 in The Astrophysical Journal.

“We have discovered an unknown population of starburst galaxies that could change the way we think many galaxies grow their stars,” said Karina.

Caputi and her colleagues pored over a voluminous dataset of nearly 6000 distant galaxies observed as part of Spitzer’s Matching Survey of the UltraVISTA ultra-deep Stripes (SMUVS) program. The scientists looked for a type of light, called H-alpha, emitted by the element hydrogen. This glow marks regions where new groups of stars have just formed from the gravitational collapse of giant clouds of gas and dust. Over vast cosmic distances—like the 12 billion light years to the galaxies in Caputi’s study—the expansion of the universe stretches H-alpha’s visible, pink-reddish light into the infrared wavelengths seen by Spitzer. Researchers can therefore leverage Spitzer as a valuable tool in gauging the levels of star formation in the early universe.

Prior investigations have focused mostly on starbursts breaking out in galaxies with high masses, usually selected out of small datasets. The catalog of observations Caputi’s team went through offered a more complete picture, though, by capturing numerous intermediate-mass galaxies also flush with the signs of starburst activity. Bringing those overlooked galaxies into the fold boosted the overall starburst percentage from negligible to a significant 15 percent, and with it, over half of the total starmaking at that time in the universe’s chronology. “We analyzed a much larger and more representative galaxy sample,” Caputi says.

The development of a new star—from cold, diffuse gas cloud to a hot, concentrated ball of matter—is a process that spans tens of millions of years. At any given time in a galaxy, only so many stars-to-be are going through this process; our own Milky Way languidly produces only about one Sun’s-mass-worth of new stars annually. Yet in a starburst galaxy, that rate of stellar creation can be hundreds of times faster.

As a result, although their quantities differ, slow-poke and fast-pace galaxies ultimately make similar contributions to the overall stellar budget. “There appear to be two types of galaxies which form stars: some are more numerous, but grow more slowly. The others are less numerous, but grow much faster,” Caputi explained. “In the end, both groups can form the same total amount of stars.”

What exactly is causing all the starbursts remains a mystery. Galaxy mergers, where the diffuse star-forming materials in two galaxies mix into gas clouds dense enough to ignite star formation, stand as highly likely candidates. Gravitational interactions with neighboring galaxies, or encounters with uncommonly thick patches of matter in the barren expanses between galaxies, might also fire up starbursts.

“We still have a lot of work to do in understanding why galaxies go into a starburst mode,” says Caputi. “Now that we have a sense of just how significant these furious periods of activity are for giving us such a large amount of the universe’s stars, we are highly motivated to get to the bottom of the mystery.”

This research has been funded by the European Research Council through the Consolidator Grant ID 681627-BUILDUP. 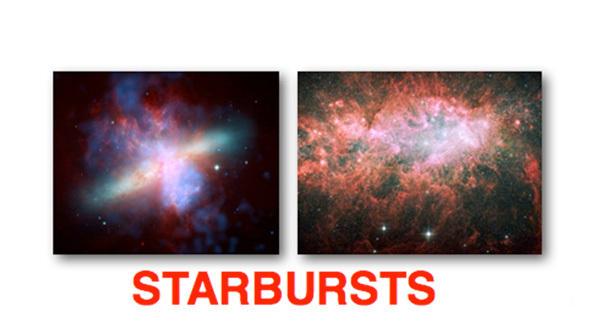 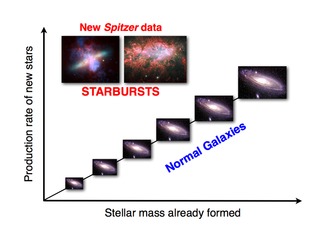