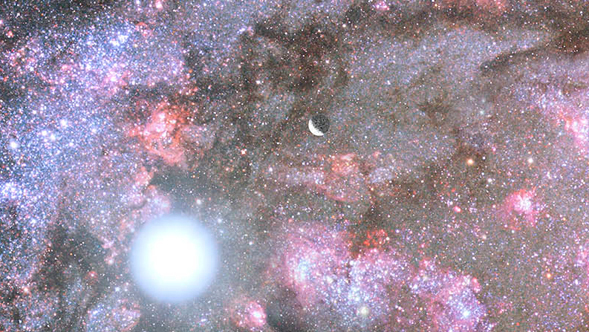 The discovery was made possible through combined observations from NASA's Hubble and Spitzer space telescopes, the W.M. Keck Observatory in Mauna Kea, Hawaii, and the European Space Agency's Herschel space observatory, in which NASA plays an important role.

A fully developed elliptical galaxy is a gas-deficient gathering of ancient stars theorized to develop from the inside out, with a compact core marking its beginnings. Because the galactic core is so far away, the light of the forming galaxy that is observable from Earth was actually created 11 billion years ago, just 3 billion years after the Big Bang.

"We really hadn't seen a formation process that could create things that are this dense," explained Erica Nelson of Yale University in New Haven, Connecticut, lead author of the study. "We suspect that this core-formation process is a phenomenon unique to the early universe because the early universe, as a whole, was more compact. Today, the universe is so diffuse that it cannot create such objects anymore."

In addition to determining the galaxy's size from the Hubble images, the team dug into archival far-infrared images from Spitzer and Herschel. This allowed them to see how fast the galaxy core is creating stars. Sparky produced roughly 300 stars per year, compared to the 10 stars per year produced by our Milky Way.

"They're very extreme environments," Nelson said. "It's like a medieval cauldron forging stars. There's a lot of turbulence, and it's bubbling. If you were in there, the night sky would be bright with young stars, and there would be a lot of dust, gas, and remnants of exploding stars. To actually see this happening is fascinating."

Astronomers theorize that this frenzied star birth was sparked by a torrent of gas flowing into the galaxy's core while it formed deep inside a gravitational well of dark matter, invisible cosmic material that acts as the scaffolding of the universe for galaxy construction.

Observations indicate that the galaxy had been furiously making stars for more than a billion years. It is likely that this frenzy eventually will slow to a stop, and that over the next 10 billion years other smaller galaxies may merge with Sparky, causing it to expand and become a mammoth, sedate elliptical galaxy.

"I think our discovery settles the question of whether this mode of building galaxies actually happened or not," said team member Pieter van Dokkum of Yale University. "The question now is, how often did this occur? We suspect there are other galaxies like this that are even fainter in near-infrared wavelengths. We think they'll be brighter at longer wavelengths, and so it will really be up to future infrared telescopes such as NASA's James Webb Space Telescope to find more of these objects."

The paper appears in the Aug. 27 issue of the journal Nature. 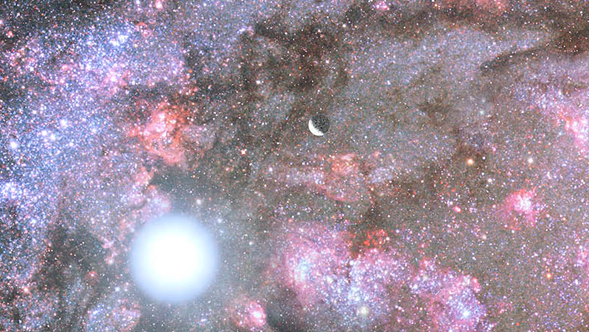 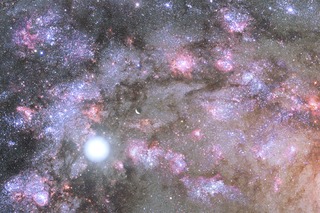