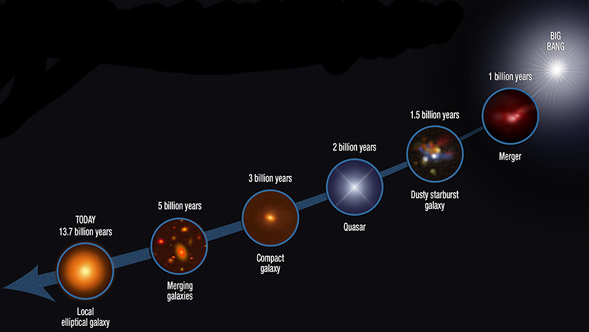 Enabled by this multi-mission collaboration, astronomers have assembled for the first time a representative spectroscopic sampling of ultra-compact, burned-out elliptical galaxies -- galaxies whose star formation was finished when the universe was only 3 billion years old, less than a quarter of its current estimated age of 13.8 billion years.

"We at last show how these compact galaxies can form, how it happened, and when it happened. This basically is the missing piece in the understanding of how the most massive galaxies formed, and how they evolved into the giant ellipticals of today," said Sune Toft of the Dark Cosmology Center at the Niels Bohr Institute in Copenhagen, who is the leader of this study. "This had been a great mystery for many years because just 3 billion years after the big bang we see that half of the most massive galaxies have already completed their star formation."

Through the research, astronomers have determined the compact ellipticals voraciously consumed the gas available for star formation, to the point they could not create new stars, and then merged with smaller galaxies to form giant ellipticals. The stars in the burned-out galaxies were packed 10 to 100 times more densely than in equally massive elliptical galaxies seen in the nearby universe today, and that surprised astronomers, according to Toft.

One group of galaxies is the compact ellipticals. The other group contains galaxies that are highly obscured with dust and undergoing rapid star formation at rates thousands of times faster than observed in the Milky Way. Starbursts in these dusty galaxies likely were ignited when two gas-rich galaxies collided. These galaxies are so dusty that they are almost invisible at optical wavelengths, but they shine bright at submillimeter wavelengths, where they were first identified nearly two decades ago by the Submillimeter Common-User Bolometer Array (SCUBA) camera on the James Clerk Maxwell Telescope in Hawaii.

Toft's team started by constructing the first representative sample of compact elliptical galaxies with accurate sizes and spectroscopic redshifts, or distances, measured with Hubble's Cosmic Assembly Near-Infrared Deep Extragalactic Legacy Survey (CANDELS) and 3D-HST programs. 3D-HST is a near-infrared spectroscopic survey to study the physical processes that shape galaxies in the distant universe. The astronomers combined these data with observations from Spitzer, and the Subaru telescope in Hawaii. This allowed for accurate stellar age estimates, from which they concluded compact elliptical galaxies formed in intense starbursts inside the galaxies that preceded them by as long as two billion years.

Next, the team made the first representative sample of the most distant submillimeter galaxies using COSMOS data from the Hubble, Spitzer, and Herschel space telescopes, and ground-based telescopes such as Subaru, the James Clerk Maxwell Telescope, and the Submillimeter Array, all located in Hawaii. This multi-spectral information, stretching from optical light through submillimeter wavelengths, yielded a full suite of information about the sizes, stellar masses, star-formation rates, dust content, and precise distances of the dust-enshrouded galaxies that were present early in the universe.

When Toft's team compared the samples of the two galaxy populations, it discovered an evolutionary link between the compact elliptical galaxies and the submillimeter galaxies. The observations show that the violent starbursts in the dusty galaxies had the same characteristics that would have been predicted for progenitors to the compact elliptical galaxies. Toft's team also calculated the intense starburst activity inside the submillimeter galaxies lasted only about 40 million years before the interstellar gas supply was exhausted.

The results appear in the Jan. 29 online issue of The Astrophysical Journal.

Herschel is a European Space Agency mission, with science instruments provided by consortia of European institutes and with important participation by NASA. While the observatory stopped making science observations in April 2013, after running out of liquid coolant, as expected, scientists continue to analyze its data. NASA's Herschel Project Office is based at JPL. JPL contributed mission-enabling technology for two of Herschel's three science instruments. The NASA Herschel Science Center, part of the Infrared Processing and Analysis Center at the California Institute of Technology in Pasadena, supports the U.S. astronomical community. 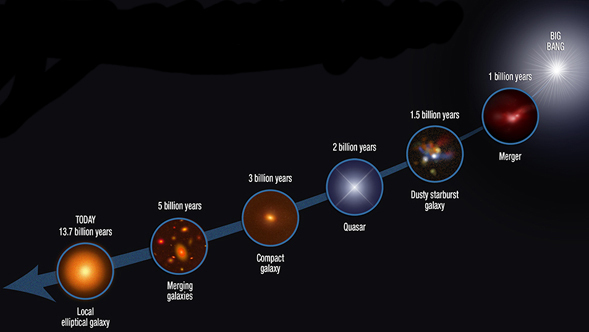 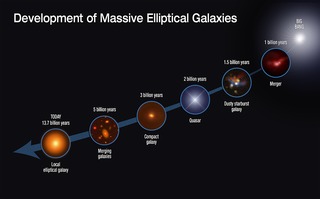