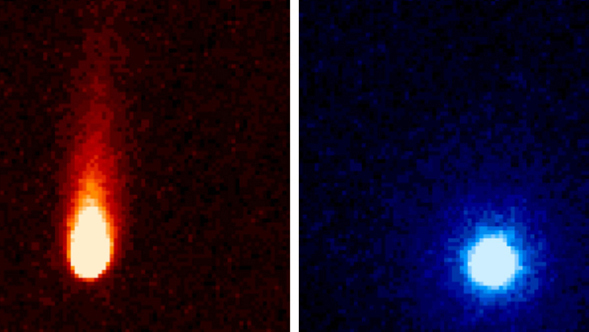 PASADENA, Calif. -- Astronomers using NASA's Spitzer Space Telescope have observed what most likely are strong carbon dioxide emissions from Comet ISON ahead of its anticipated pass through the inner solar system later this year.

Images captured June 13 with Spitzer's Infrared Array Camera indicate carbon dioxide is slowly and steadily "fizzing" away from the so-called "soda-pop comet," along with dust, in a tail about 186,400 miles (300,000 kilometers) long.

"We estimate ISON is emitting about 2.2 million pounds (1 million kilograms) of what is most likely carbon dioxide gas and about 120 million pounds (54.4 million kilograms) of dust every day," said Carey Lisse, leader of NASA's Comet ISON Observation Campaign and a senior research scientist at the Johns Hopkins University Applied Physics Laboratory in Laurel, Md. "Previous observations made by NASA's Hubble Space Telescope and the Swift Gamma-Ray Burst Mission and Deep Impact spacecraft gave us only upper limits for any gas emission from ISON. Thanks to Spitzer, we now know for sure the comet's distant activity has been powered by gas."

Comet ISON was about 312 million miles (502 million kilometers) from the sun, 3.35 times farther than Earth, when the observations were made.

"These fabulous observations of ISON are unique and set the stage for more observations and discoveries to follow as part of a comprehensive NASA campaign to observe the comet," said James L. Green, NASA's director of planetary science in Washington. "ISON is very exciting. We believe that data collected from this comet can help explain how and when the solar system first formed."

Comet ISON (officially known as C/2012 S1) is less than 3 miles (4.8 kilometers) in diameter, about the size of a small mountain, and weighs between 7 billion and 7 trillion pounds (3.2 billion and 3.2 trillion kilograms). Because the comet is still very far away, its true size and density have not been determined accurately. Like all comets, ISON is a dirty snowball made up of dust and frozen gases such as water, ammonia, methane and carbon dioxide. These are some of the fundamental building blocks, which scientists believe led to the formation of the planets 4.5 billion years ago.

Comet ISON is believed to be inbound on its first passage from the distant Oort Cloud, a roughly spherical collection of comets and comet-like structures that exists in a space between one-tenth light-year and 1 light-year from the sun. The comet will pass within 724,000 miles (1.16 million kilometers) of the sun on Nov. 28.

It is warming up gradually as it gets closer to the sun. In the process, different gases are heating up to the point of evaporation, revealing themselves to instruments in space and on the ground. Carbon dioxide is thought to be the gas that powers emission for most comets between the orbits of Saturn and the asteroids.

The comet was discovered Sept. 21, roughly between Jupiter and Saturn, by Vitali Nevski and Artyom Novichonok at the International Scientific Optical Network (ISON) near Kislovodsk, Russia. This counts as an early detection of a comet, and the strong carbon dioxide emissions may have made the detection possible.

"This observation gives us a good picture of part of the composition of ISON, and, by extension, of the proto-planetary disk from which the planets were formed," said Lisse. "Much of the carbon in the comet appears to be locked up in carbon dioxide ice. We will know even more in late July and August, when the comet begins to warm up near the water-ice line outside of the orbit of Mars, and we can detect the most abundant frozen gas, which is water, as it boils away from the comet."

NASA's Jet Propulsion Laboratory in Pasadena, Calif., manages the Spitzer Space Telescope mission for NASA's Science Mission Directorate in Washington. Science operations are conducted at the Spitzer Science Center at the California Institute of Technology in Pasadena. Data are archived at the Infrared Science Archive housed at the Infrared Processing and Analysis Center at Caltech. Caltech manages JPL for NASA. 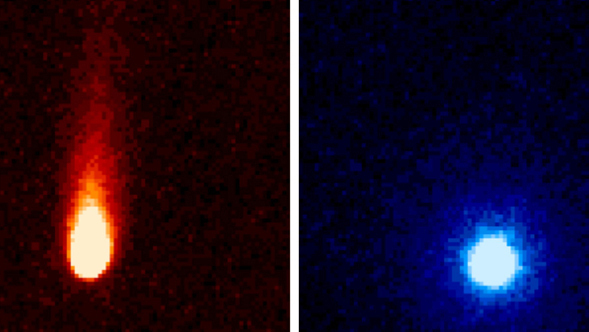 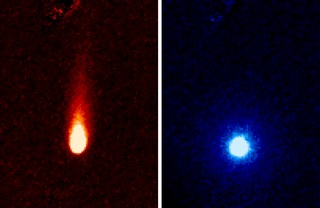