We have launched the new Spitzer website! Send feedback to outreach@ipac.caltech.edu. Find the old website at http://legacy.spitzer.caltech.edu.
NASA
Jet Propulsion Laboratory
California Institute of Technology
Asteroid Belts at Just the Right Place are Friendly to Life 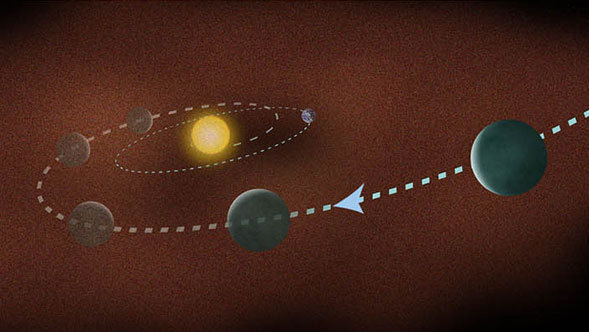 PASADENA, Calif. -- Solar systems with life-bearing planets may be rare if they are dependent on the presence of asteroid belts of just the right mass, according to a study by Rebecca Martin, a NASA Sagan Fellow from the University of Colorado in Boulder, and astronomer Mario Livio of the Space Telescope Science Institute in Baltimore, Md.

They suggest that the size and location of an asteroid belt, shaped by the evolution of the sun's planet-forming disk and by the gravitational influence of a nearby giant Jupiter-like planet, may determine whether complex life will evolve on an Earth-like planet.

This might sound surprising because asteroids are considered a nuisance due to their potential to impact Earth and trigger mass extinctions. But an emerging view proposes that asteroid collisions with planets may provide a boost to the birth and evolution of complex life.

Asteroids may have delivered water and organic compounds to the early Earth. According to the theory of punctuated equilibrium, occasional asteroid impacts might accelerate the rate of biological evolution by disrupting a planet's environment to the point where species must try new adaptation strategies.

The astronomers based their conclusion on an analysis of theoretical models and archival observations, including infrared data from NASA's Spitzer Space Telescope.

"Our study shows that only a tiny fraction of planetary systems observed to date seem to have giant planets in the right location to produce an asteroid belt of the appropriate size, offering the potential for life on a nearby rocky planet," said Martin, the study's lead author. "Our study suggests that our solar system may be rather special."

The findings will appear today in the Monthly Notices of the Royal Astronomical Society: Letters.

Martin and Livio suggest that the location of an asteroid belt relative to a Jupiter-like planet is not an accident. The asteroid belt in our solar system, located between Mars and Jupiter, is a region of millions of space rocks that sits near the "snow line," which marks the border

of a cold region where volatile material such as water ice is far enough from the sun to remain intact. When Jupiter formed just beyond the snow line, its powerful gravity prevented nearby material inside its orbit from coalescing and building planets.

Instead, Jupiter's influence caused the material to collide and break apart. These fragmented rocks settled into an asteroid belt around the sun.

"To have such ideal conditions you need a giant planet like Jupiter that is just outside the asteroid belt [and] that migrated a little bit, but not through the belt," Livio explained. "If a large planet like Jupiter migrates through the belt, it would scatter the material. If, on the other hand, a large planet did not migrate at all, that, too, is not good because the asteroid belt would be too massive. There would be so much bombardment from asteroids that life may never evolve."

They then looked at all the existing space-based infrared observations from the Spitzer Space Telescope of 90 stars having warm dust, which could indicate the presence of an asteroid belt-like structure. The temperature of the warm dust was consistent with that of the snow line. "The warm dust falls right onto our calculated snow lines, so the observations are consistent with our predictions," Martin said.

The duo then studied observations of the 520 giant planets found outside our solar system. Only 19 of them reside outside the snow line.  This suggests that most of the giant planets that may have formed outside the snowline have migrated too far inward to preserve the kind of slightly dispersed asteroid belt needed to foster enhanced evolution of life on an Earth-like planet near the belt. Apparently, less than four percent of the observed systems may actually harbor such a compact asteroid belt.

"Based on our scenario, we should concentrate our efforts to look for complex life in systems that have a giant planet outside of the snow line," Livio said.

The Sagan Fellowship Program is administered by the NASA Exoplanet Science Institute at the California Institute of Technology in Pasadena, Calif., whose purpose is to advance the scientific and technical goals of NASA's Exoplanet Exploration Program. The Exoplanet Exploration Program is managed for NASA by NASA's Jet Propulsion Laboratory in Pasadena, Calif. Caltech manages JPL for NASA.

More information about exoplanets and NASA's planet-finding program is at http://planetquest.jpl.nasa.gov . 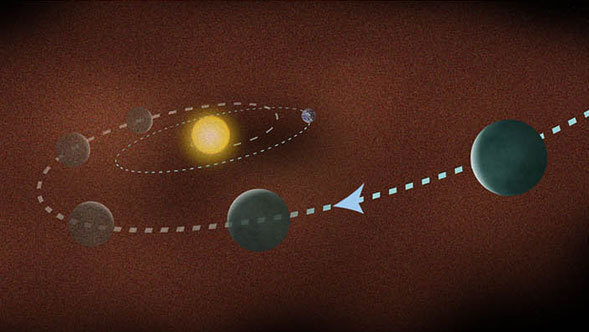 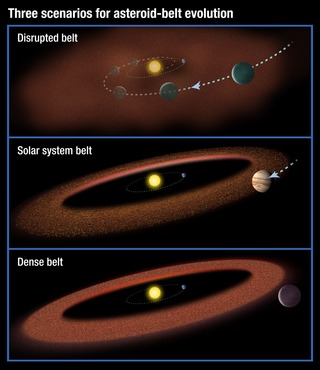 Artwork | ssc2012-15a
Scenarios for the Evolution of Asteroid Belts