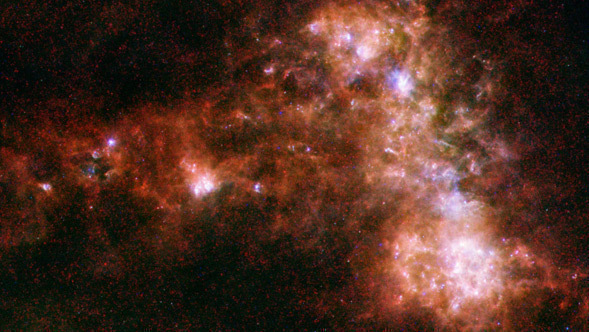 PASADENA, Calif. - The cold dust that builds blazing stars is revealed in new images that combine observations from the Herschel Space Observatory, a European Space Agency-led mission with important NASA contributions; and NASA's Spitzer Space Telescope. The new images map the dust in the galaxies known as the Large and Small Magellanic Clouds, two of the closest neighbors to our own Milky Way galaxy.

The Large Magellanic Cloud looks like a fiery, circular explosion in the combined Herschel-Spitzer infrared data. Ribbons of dust ripple through the galaxy, with significant fields of star formation noticeable in the center, center-left and top right (the brightest center-left region is called 30 Doradus, or the Tarantula Nebula, for its appearance in visible light). The Small Magellanic Cloud has a much more irregular shape. A stream of dust extends to the left in this image, known as the galaxy's "wing," and a bar of star formation appears on the right

The colors in these images indicate temperatures in the dust that permeate the Magellanic Clouds. Colder regions show where star formation is at its earliest stages or is shut off, while warm expanses point to new stars heating dust surrounding them. The coolest areas and objects appear in red, corresponding to infrared light taken up by Herschel's Spectral and Photometric Imaging Receiver at 250 microns, or millionths of a meter. Herschel's Photodetector Array Camera and Spectrometer fills out the mid-temperature bands, shown in green, at 100 and 160 microns. The warmest spots appear in blue, courtesy of 24- and 70-micron data from Spitzer.

"Studying these galaxies offers us the best opportunity to study star formation outside of the Milky Way," said Margaret Meixner, an astronomer at the Space Telescope Science Institute, Baltimore, Md., and principal investigator for the mapping project. "Star formation affects the evolution of galaxies, so we hope understanding the story of these stars will answer questions about galactic life cycles."

The Large and Small Magellanic Clouds are the two biggest satellite galaxies of our home galaxy, the Milky Way, though they are still considered dwarf galaxies compared to the big spiral of the Milky Way. Dwarf galaxies also contain fewer metals, or elements heavier than hydrogen and helium. Such an environment is thought to slow the growth of stars. Star formation in the universe peaked around 10 billion years ago, even though galaxies contained lesser abundances of metallic dust. Previously, astronomers only had a general sense of the rate of star formation in the Magellanic Clouds, but the new images enable them to study the process in more detail.

The results were presented today at the 219th meeting of the American Astronomical Society in Austin, Texas. 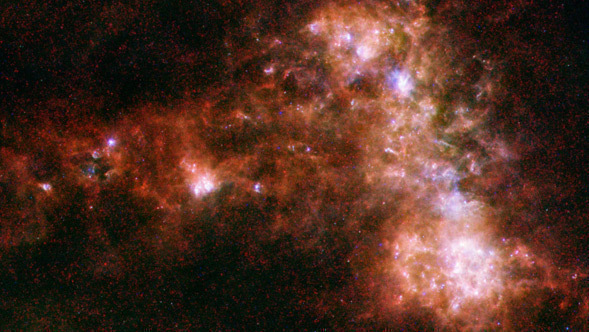 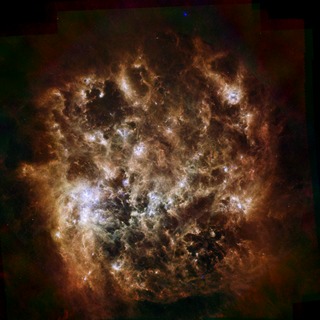 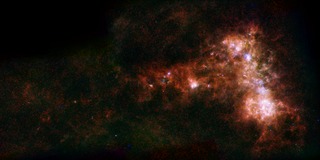