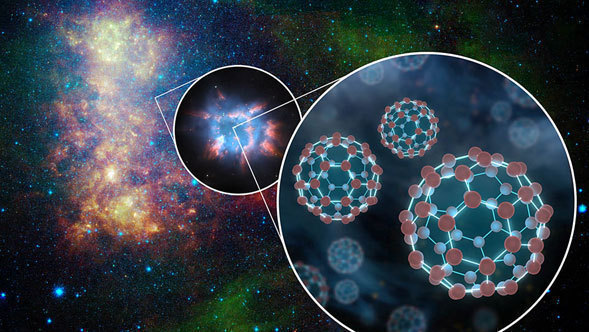 PASADENA, Calif. -- Astronomers have discovered bucket loads of buckyballs in space. They used NASA's Spitzer Space Telescope to find the little carbon spheres throughout our Milky Way galaxy -- in the space between stars and around three dying stars. What's more, Spitzer detected buckyballs around a fourth dying star in a nearby galaxy in staggering quantities -- the equivalent in mass to about 15 of our moons.

Buckyballs, also known as fullerenes, are soccer-ball-shaped molecules consisting of 60 linked carbon atoms. They are named for their resemblance to the architect Buckminster Fuller's geodesic domes, an example of which is found at the entrance to Disney's Epcot theme park in Orlando, Fla. The miniature spheres were first discovered in a lab on Earth 25 years ago, but it wasn't until this past July that Spitzer was able to provide the first confirmed proof of their existence in space (see /news/1159-ssc2010-06). At that time, scientists weren't sure if they had been lucky to find a rare supply, or if perhaps the cosmic balls were all around.

"It turns out that buckyballs are much more common and abundant in the universe than initially thought," said astronomer Letizia Stanghellini of the National Optical Astronomy Observatory in Tucson, Ariz. "Spitzer had recently found them in one specific location, but now we see them in other environments. This has implications for the chemistry of life. It's possible that buckyballs from outer space provided seeds for life on Earth."

Stanghellini is co-author of a new study appearing online Oct. 28 in the Astrophysical Journal Letters. Anibal García-Hernández of the Instituto de Astrofísica de Canarias, Spain, is the lead author of the paper. Another Spitzer study about the discovery of buckyballs in space was also recently published in the Astrophysical Journal Letters. It was led by Kris Sellgren of Ohio State University, Columbus.

The García-Hernández team found the buckyballs around three dying sun-like stars, called planetary nebulae, in our own Milky Way galaxy. These cloudy objects, made up of material shed from the dying stars, are similar to the one where Spitzer found the first evidence for their existence.

The new research shows that all the planetary nebulae in which buckyballs have been detected are rich in hydrogen. This goes against what researchers thought for decades -- they had assumed that, as is the case with making buckyballs in the lab, hydrogen could not be present. The hydrogen, they theorized, would contaminate the carbon, causing it to form chains and other structures rather than the spheres, which contain no hydrogen at all. "We now know that fullerenes and hydrogen coexist in planetary nebulae, which is really important for telling us how they form in space," said García-Hernández.

García-Hernández and his colleagues also located buckyballs in a planetary nebula within a nearby galaxy called the Small Magellanic Cloud. This was particularly exciting to the researchers, because, in contrast to the planetary nebulae in the Milky Way, the distance to this galaxy is known. Knowing the distance to the source of the buckyballs meant that the astronomers could calculate their quantity -- twenty percent of Earth's mass, or the mass of 15 of our moons.

The other new study, from Sellgren and her team, demonstrates that buckyballs are also present in the space between stars, but not too far away from young solar systems. The cosmic balls may have been formed in a planetary nebula, or perhaps between stars. A feature story about this research is online at /news/1212-feature10-18.

"It's exciting to find buckyballs in between stars that are still forming their solar systems, just a comet's throw away," Sellgren said. "This could be the link between fullerenes in space and fullerenes in meteorites."

The implications are far-reaching. Scientists have speculated in the past that buckyballs, which can act like cages for other molecules and atoms, might have carried substances to Earth that kick-started life. Evidence for this theory comes from the fact that buckyballs have been found in meteorites carrying extraterrestial gases.

"Buckyballs are sort of like diamonds with holes in the middle," said Stanghellini. "They are incredibly stable molecules that are hard to destroy, and they could carry other interesting molecules inside them. We hope to learn more about the important role they likely play in the death and birth of stars and planets, and maybe even life itself."

The little carbon balls are important in technology research too. They have potential applications in superconducting materials, optical devices, medicines, water purification, armor and more. 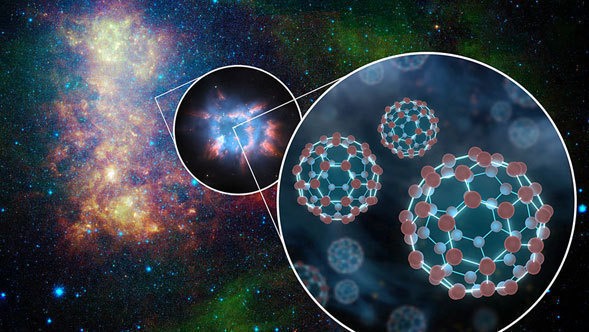 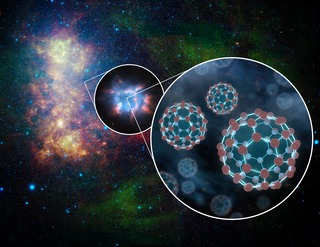