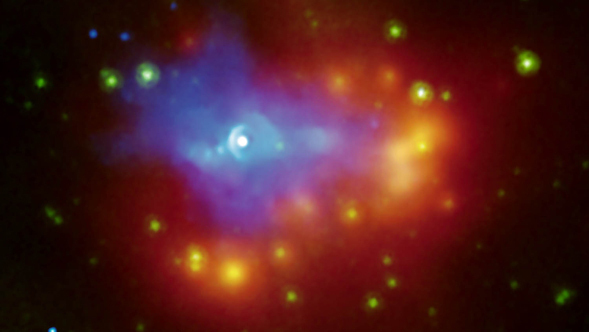 PASADENA, Calif. -- A new image from NASA's Chandra and Spitzer space telescopes shows the dusty remains of a collapsed star. The dust is flying past and engulfing a nearby family of stars.

"Scientists think the stars in the image are part of a stellar cluster in which a supernova exploded," said Tea Temin of the Harvard-Smithsonian Center for Astrophysics, Cambridge, Mass., who led the study. "The material ejected in the explosion is now blowing past these stars at high velocities."

It shows the Chandra X-ray Observatory data in blue, and data from the Spitzer Space Telescope in green (shorter wavelength) and red-yellow (longer). The white source near the center of the image is a dense, rapidly rotating neutron star, or pulsar, left behind after a core-collapse supernova explosion. The pulsar generates a wind of high-energy particles -- seen in the Chandra data -- that expands into the surrounding environment, illuminating the material ejected in the supernova explosion.

The infrared shell that surrounds the pulsar wind is made up of gas and dust that condensed out of debris from the supernova. As the cold dust expands into the surroundings, it is heated and lit up by the stars in the cluster so that it is observable in infrared. The dust closest to the stars is the hottest and is seen glowing in yellow in the image. Some of the dust is also being heated by the expanding pulsar wind as it overtakes the material in the shell.

The unique environment into which this supernova exploded makes it possible for astronomers to observe the condensed dust from the supernova that is usually too cold to emit in infrared. Without the presence of the stellar cluster, it would not be possible to observe this dust until it becomes energized and heated by a shock wave from the supernova. However, the very action of such shock heating would destroy many of the smaller dust particles. In G54.1+0.3, astronomers are observing pristine dust before any such destruction.

G54.1+0.3 provides an exciting opportunity for astronomers to study the freshly formed supernova dust before it becomes altered and destroyed by shocks. The nature and quantity of dust produced in supernova explosions is a long-standing mystery, and G54.1+0.3 supplies an important piece to the puzzle.

The Spitzer observations were made before the telescope ran out of its coolant in May 2009 and began its "warm" mission. NASA's Jet Propulsion Laboratory in Pasadena, Calif., manages Spitzer for NASA's Science Mission Directorate, Washington. Science operations are conducted at the Spitzer Science Center at the California Institute of Technology in Pasadena. Caltech manages JPL for NASA. 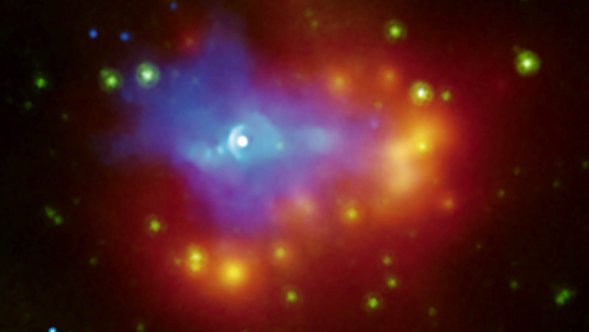 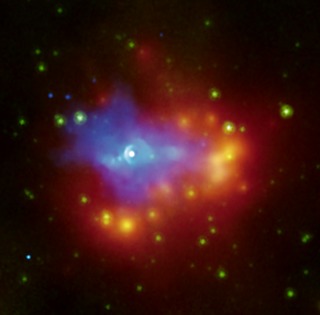