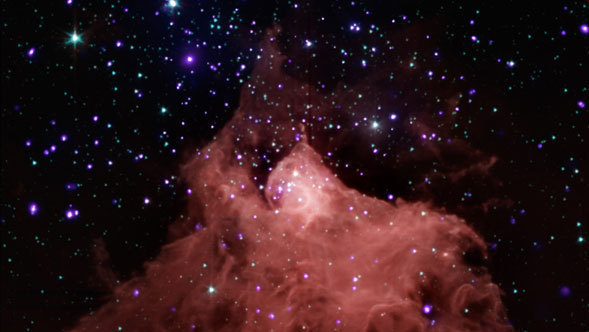 PASADENA, Calif. A new study from two of NASA's Great Observatories provides fresh insight into how some stars are born, along with a beautiful new image of a stellar nursery in our Milky Way galaxy. The research shows that radiation from massive stars may trigger the formation of many more stars than previously thought.

While astronomers have long understood that stars and planets form from the collapse of a cloud of gas, the question of the main causes of this process has remained open.

One option is that the cloud cools, gravity gets the upper hand, and the cloud falls in on itself. The other possibility is that a "trigger" from some external source -- like radiation from a massive star or a shock from a supernova -- initiates the collapse. Some previous studies have noted a combination of triggering mechanisms in effect.

By combining observations of the star-forming cloud Cepheus B from the Chandra X-ray Observatory and the Spitzer Space Telescope, researchers have taken an important step in addressing this question. Cepheus B is a cloud of mainly cool molecular hydrogen located about 2,400 light years from Earth. There are hundreds of very young stars inside and around the cloud -- ranging from a few million years old outside the cloud to less than a million in the interior -- making it an important testing ground for star formation.

"Astronomers have generally believed that it's somewhat rare for stars and planets to be triggered into formation by radiation from massive stars," said Konstantin Getman of Penn State University, University Park, Pa., lead author of the study. "Our new result shows this belief is likely to be wrong."

This particular type of triggered star formation had previously been seen in small populations of a few dozen stars, but the latest result is the first time it has been clearly observed in a rich population of several hundred stars.

While slightly farther away than the famous Orion star-forming region, Cepheus B is at a better orientation for astronomers to observe the triggering process. The Chandra observations allowed the astronomers to pick out young stars within and around Cepheus B. Young stars have turbulent interiors that generate highly active magnetic fields, which, in turn, produce strong and identifiable X-ray signatures.

The Spitzer data revealed whether the young stars have a disk of material (known as "protoplanetary" disks) around them. Since they only exist in very young systems where planets are still forming, the presence of protoplanetary disks -- or lack thereof -- is an indication of the age of a star system.

The new study suggests that star formation in Cepheus B is mainly triggered by radiation from one bright, massive star outside the molecular cloud. According to theoretical models, radiation from this star would drive a compression wave into the cloud-triggering star formation in the interior, while evaporating the cloud's outer layers. The Chandra-Spitzer analysis revealed slightly older stars outside the cloud, and the youngest stars with the most protoplanetary disks in the cloud interior -- exactly what is predicted from the triggered star formation scenario.

"We essentially see a wave of star and planet formation that is rippling through this cloud," said co-author Eric Feigelson, also of Penn State. "It's clear that we can learn a lot about stellar nurseries by combining data from these two Great Observatories."

A paper describing these results was published in the July 10 issue of the Astrophysical Journal. The team of astronomers that worked with Getman and Feigelson also included Kevin Luhman and Gordon Garmire from Penn State; Aurora Sicilia-Aguilar from Max-Planck-Institut fur Astronomie in Germany; and Junfeng Wang from Harvard-Smithsonian Center for Astrophysics, Cambridge, Mass.

NASA's Marshall Space Flight Center in Huntsville, Ala., manages the Chandra program for NASA's Science Mission Directorate in Washington. The Smithsonian Astrophysical Observatory controls Chandra's science and flight operations from Cambridge, Mass. NASA's Jet Propulsion Laboratory, Pasadena, Calif., manages the Spitzer Space Telescope mission for NASA's Science Mission Directorate, Washington. Science operations are conducted at the Spitzer Science Center at the California Institute of Technology in Pasadena. Caltech manages JPL for NASA. The Spitzer observations were taken during the observatory's "cold" mission, before its coolant ran out and it began operating at a warmer temperature. 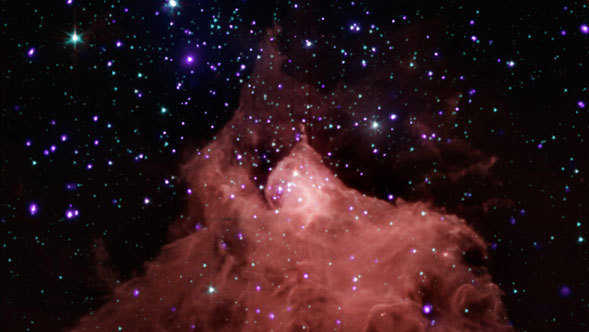 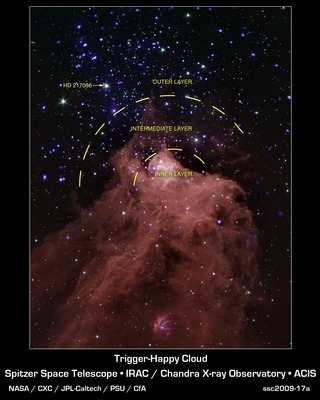