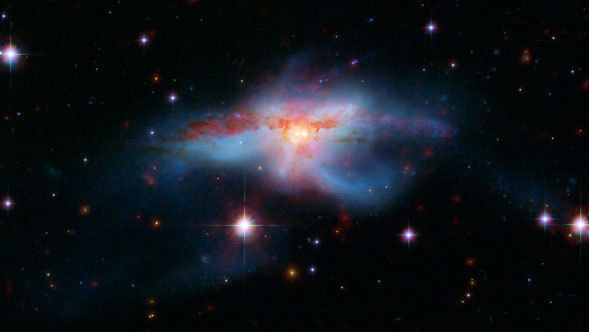 PASADENA, Calif. - A new image from NASA's Spitzer Space Telescope offers a rare view of an imminent collision between the cores of two merging galaxies, each powered by a black hole with millions of times the mass of the sun.

The galactic cores are in a single, tangled galaxy called NGC 6240, located 400-million light years away in the constellation Ophiuchus. Millions of years ago, each core was the dense center of its own galaxy before the two galaxies collided and ripped each other apart. Now, these cores are approaching each other at tremendous speeds and preparing for the final cataclysmic collision. They will crash into each other in a few million years, a relatively short period on a galactic timescale.

The spectacular image combines visible light from NASA's Hubble Space Telescope and infrared light from Spitzer. It catches the two galaxies during a rare, short-lived phase of their evolution, when both cores of the interacting galaxies are still visible but closing in on each other fast.

"One of the most exciting things about the image is that this object is unique," said Stephanie Bush of the Harvard-Smithsonian Center for Astrophysics, Cambridge, Mass., lead author of a new paper describing the observation in an upcoming issue of the Astrophysical Journal. "Merging is a quick process, especially when you get to the train wreck that is happening. There just aren't many galactic mergers at this stage in the nearby universe."

NGC 6240 is already putting out huge amounts of infrared light, an indication that a burst of star formation is underway. The extra infrared radiation is common in interacting galaxies; as the two galaxies interact, dust and gas swept up by the collision form a burst of new stars that give off infrared light. Such galaxies are called luminous infrared galaxies. Spitzer's infrared array camera can image the extra heat from newly formed stars, even though their visible light is obscured by thick dust clouds around them.

The blob-like shape of the galaxy is due to the sustained violence of the collision. Streams of millions of stars are being ripped off the galaxy, forming wispy "tidal tails" that lead off NGC 6240 in several directions. But things are about to get even more violent as the main event approaches and the two galactic cores meld into one.

In the center of NGC 6240, the two black holes in the cores will whip up a frenzy of radiation as they careen towards one another head-on, likely transforming the galaxy into a monster known as an ultra-luminous infrared galaxy, thousands of times as bright in infrared as our Milky Way.

Another fascinating aspect of this rare object is that no two galactic mergers are the same. "Not only are there few objects at this stage, but each object is unique because it came from different progenitor galaxies," said Bush. "These observations give us another layer of information about this galaxy, and galactic mergers in general."

Other authors of this paper include Zhong Wang, Margarita Karovska and Giovanni Fazio, all of the Harvard-Smithsonian Center for Astrophysics. NASA's Jet Propulsion Laboratory, Pasadena, Calif., manages the Spitzer Space Telescope mission for NASA's Science Mission Directorate, Washington. Science operations are conducted at the Spitzer Science Center at the California Institute of Technology, also in Pasadena. Caltech manages JPL for NASA. 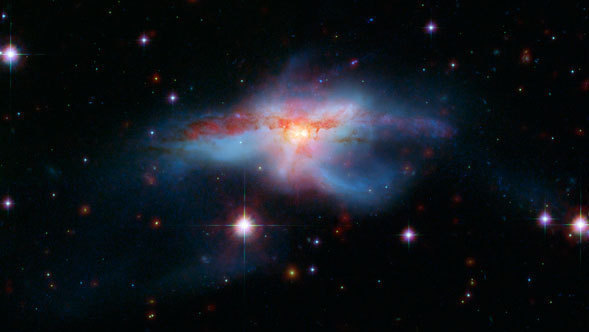 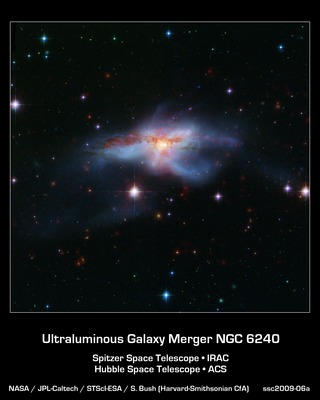