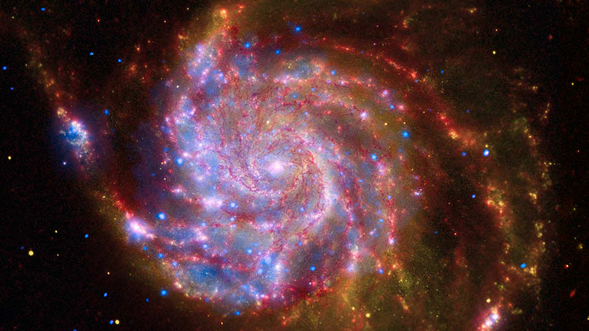 PASADENA, Calif. -- Galileo first turned his telescope to the heavens in 1609, marking the dawn of modern astronomy. To commemorate 400 years of exploring the universe, 2009 has been designated the International Year of Astronomy.

In conjunction with Galileo's birthday on Feb. 15, NASA is releasing images from its Great Observatories -- the Hubble Space Telescope, Spitzer Space Telescope, and Chandra X-ray Observatory -- to more than 100 planetariums, museums, nature centers and schools across the country.

The selected sites will unveil a large, 9-square-foot print of the spiral galaxy Messier 101 that combines the optical view of Hubble, the infrared view of Spitzer, and the X-ray view of Chandra into one colorful, multiwavelength picture. "It's like using your eyes, night vision goggles and X-ray vision all at the same time," said Hashima Hasan, lead scientist for the International Year of Astronomy at NASA Headquarters in Washington.

Participating institutions will display a matched trio of Hubble, Spitzer, and Chandra images of Messier 101. Each image shows a different wavelength view of the galaxy that illustrates not only the different science each observatory conducts, but also how far astronomy has come since Galileo.

Messier 101 is a spiral galaxy about 22 million light-years away in the constellation Ursa Major. It is larger than our own Milky Way galaxy, but similar in many ways.

Hubble's visible-light view shows off the swirls of bright stars and glowing gas that give Messier 101 its nickname "the Pinwheel Galaxy." In contrast, Spitzer's infrared-light image sees into the spiral arms and reveals the glow of dust lanes where dense clouds can collapse to form new stars. Chandra's X-ray view uncovers the high-energy features in the galaxy, such as remnants of exploded stars or matter zooming around black holes. The juxtaposition of observations from these three telescopes provides an in-depth view of the galaxy for both astronomers and the public.

"The amazing scientific discoveries Galileo made four centuries ago are continued today by scientists using NASA's space observatories," said Denise Smith, the unveiling's project manager at the Space Telescope Science Institute in Baltimore, Md. "NASA's Great Observatories are distributing huge prints of spectacular images so the public can share in the exploration and wonder of the universe."

The unveilings will take place Feb. 14 to 28 at 76 museums and 40 schools and universities nationwide, reaching both big cities and small towns. Sites are planning celebrations involving the public, schools and local media.

The Astrophysics Division of NASA's Science Mission Directorate supports the International Year of Astronomy Great Observatories image unveiling. The project is a collaboration among the Space Telescope Science Institute, the Spitzer Science Center in Pasadena, Calif., and the Chandra X-ray Center in Cambridge, Mass.

The M01 images and a list of places exhibiting these images is online at: http://hubblesite.org/news/2009/07 and http://hubblesource.stsci.edu/events/iya/participants.php.

Find out more about NASA's contributions to the International Year of Astronomy at http://astronomy2009.nasa.gov. 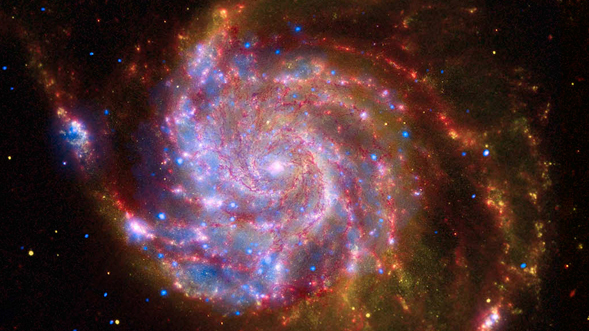 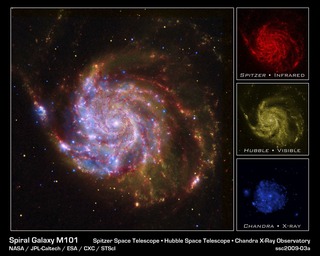 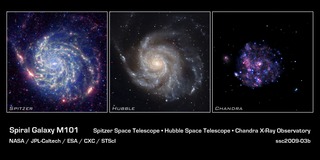 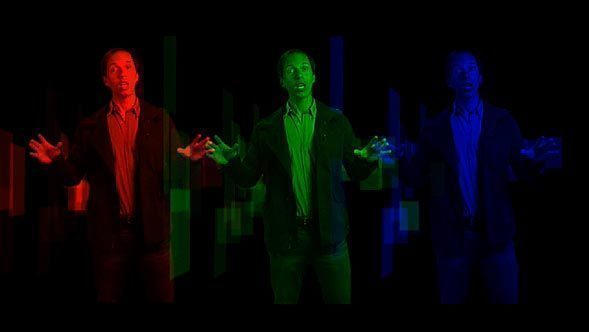 Hidden Universe | hiddenuniverse025
A Galaxy of a Different Color (Showcase)