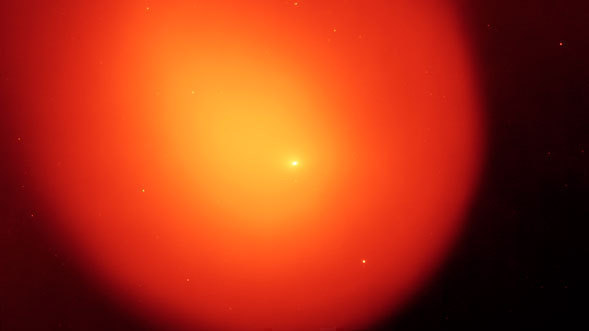 When comet Holmes unexpectedly erupted in 2007, professional and amateur astronomers around the world turned their telescopes toward the spectacular event. Their quest was to find out why the comet had suddenly exploded.

Observations taken of the comet after the explosion by NASA's Spitzer Space Telescope deepen the mystery, showing oddly behaving streamers in the shell of dust surrounding the nucleus of the comet. The data also offer a rare look at the material liberated from within the nucleus, and confirm previous findings from NASA's Stardust and Deep Impact missions.

"The data we got from Spitzer do not look like anything we typically see when looking at comets," said Bill Reach of NASA's Spitzer Science Center at the California Institute of Technology, Pasadena, Calif. Reach is lead investigator of the Spitzer observations. "The comet Holmes explosion gave us a rare glimpse at the inside of a comet nucleus." The findings were presented at the 40th meeting of the Division of Planetary Sciences in Ithaca, N.Y.

Every six years, comet 17P/Holmes speeds away from Jupiter and heads inward toward the sun, traveling the same route typically without incident. However, twice in the last 116 years, in November 1892 and October 2007, comet Holmes exploded as it approached the asteroid belt, and brightened a millionfold overnight.

In an attempt to understand these odd occurrences, astronomers pointed NASA's Spitzer Space Telescope at the comet in November 2007 and March 2008. By using Spitzer's infrared spectrograph instrument, Reach was able to gain valuable insights into the composition of Holmes' solid interior. Like a prism spreading visible-light into a rainbow, the spectrograph breaks up infrared light from the comet into its component parts, revealing the fingerprints of various chemicals.

In November of 2007, Reach noticed a lot of fine silicate dust, or crystallized grains smaller than sand, like crushed gems. He noted that this particular observation revealed materials similar to those seen around other comets where grains have been treated violently, including NASA's Deep Impact mission, which smashed a projectile into comet Tempel 1; NASA's Stardust mission, which swept particles from comet Wild 2 into a collector at 13,000 miles per hour (21,000 kilometers per hour), and the outburst of comet Hale-Bopp in 1995.

"Comet dust is very sensitive, meaning that the grains are very easily destroyed, said Reach. "We think the fine silicates are produced in these violent events by the destruction of larger particles originating inside the comet nucleus."

When Spitzer observed the same portion of the comet again in March 2008, the fine-grained silicate dust was gone and only larger particles were present. "The March observation tells us that there is a very small window for studying composition of comet dust after a violent event like comet Holmes' outburst," said Reach.

Comet Holmes not only has unusual dusty components, it also does not look like a typical comet. According to Jeremie Vaubaillon, a colleague of Reach's at Caltech, pictures snapped from the ground shortly after the outburst revealed streamers in the shell of dust surrounding the comet. Scientists suspect they were produced after the explosion by fragments escaping the comet's nucleus.

In November 2007, the streamers pointed away from the sun, which seemed natural because scientists believed that radiation from the sun was pushing these fragments straight back. However, when Spitzer imaged the same streamers in March 2008, they were surprised to find them still pointing in the same direction as five months before, even though the comet had moved and sunlight was arriving from a different location. "We have never seen anything like this in a comet before. The extended shape still needs to be fully understood," said Vaubaillon.

He notes that the shell surrounding the comet also acts peculiarly. The shape of the shell did not change as expected from November 2007 to March 2008. Vaubaillon said this is because the dust grains seen in March 2008 are relatively large, approximately one millimeter in size, and thus harder to move.

"If the shell was comprised of smaller dust grains, it would have changed as the orientation of the sun changes with time," said Vaubaillon. "This Spitzer image is very unique. No other telescope has seen comet Holmes in this much detail, five months after the explosion."

"Like people, all comets are a little different. We've been studying comets for hundreds of years -- 116 years in the case of comet Holmes -- but still do not really understand them," said Reach. "However, with the Spitzer observations and data from other telescopes, we are getting closer." 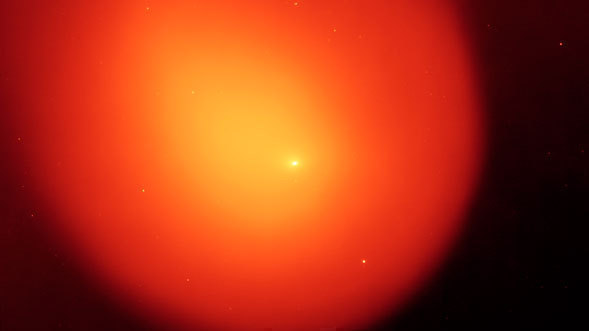 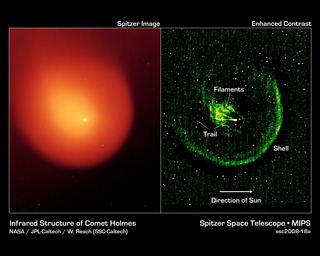