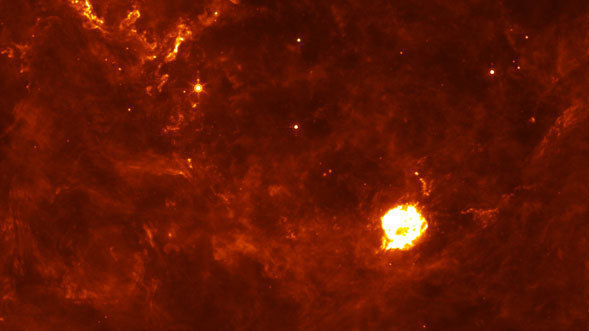 Eli Dwek of NASA's Goddard Space Flight Center in Greenbelt, Md. and Richard Arendt of the University of Maryland, Baltimore County, say these echoes are powered by radiation from Cassiopeia A supernova shock wave that blew the star apart some 11,000 years ago.

Previously, other Spitzer researchers discovered hot spots near the Cassiopeia A supernova remnant and recognized the spots' importance as light echoes of the original blast. Dwek and Arendt used Spitzer data to probe this hot dust and pin down the cause of the echoes more precisely.

Six knots of silicate dust near the remnant show temperatures between -173 and -123 degrees Celsius (-280 and -190 degrees Fahrenheit). Although this might seem frigid by earthly standards, such temperatures are downright hot compared to typical interstellar dust.

Writing in the October 1 issue of The Astrophysical Journal, the scientists show that the only event that could make the grains this hot is the powerful and short-lived pulse of ultraviolet radiation and X-rays that heralded the death of the star. The flash was a hundred billion times brighter than the sun, but lasted only a day or so.

"They've identified the precise event during the demolition of the star that produces the echo we see," said Michael Werner, the project scientist for Spitzer at NASA's Jet Propulsion Laboratory in Pasadena, Calif.

Light from the explosion reached Earth in the 17th century, but no one noticed. The Spitzer find gives astronomers a second chance to study the supernova as it unfolds.

Although the explosion originally escaped detection, its aftermath -- a hot, expanding gas cloud known as Cassiopeia A (Cas A, for short) -- is one of the best-studied supernova remnants. The blast zone lies 11,000 light-years away in the constellation Cassiopeia.

When a massive star runs out of nuclear fuel, its core collapses into a superdense, city-sized object called a neutron star. As the neutron star forms, it stiffens and rebounds. This triggers a mammoth shock wave that blows the star's outer layers to smithereens. The exiting shock creates a high-energy flash that precedes the supernova's rise in visible light.

Evidence for a flash associated with this "shock breakout" existed only in computer simulations until January 9, 2008. That's when NASA's Swift satellite detected a 5-minute-long X-ray pulse from galaxy NGC 2770. A few days later, a new supernova -- designated SN 2008D -- appeared in the galaxy.

The infrared echoes from Cas A arise from dust clouds about 160 light-years farther away than the remnant. The supernova's initial radiation pulse expands through space at the speed of light, then encounters the clouds and heats their dust grains. The dust, in turn, re-radiates the energy at infrared wavelengths.

The breakout radiation took 160 years to reach the clouds and, once heated, the dust's infrared energy had to make up the same distance. This extra travel time results in a 320-year offset between the supernova's initial outward-moving flash and arrival of the dust's infrared echo at Earth. The researchers plan to use the echoes to paint an intimate portrait of the explosion, the star and the immediate environment.

When light from the Cas A supernova first reached Earth in the late 1600s, no one reported seeing a new star. On August 16, 1680, the English astronomer John Flamsteed might have seen the supernova without recognizing it. He recorded a faint naked-eye star near the position of Cas A, but none exists there now. 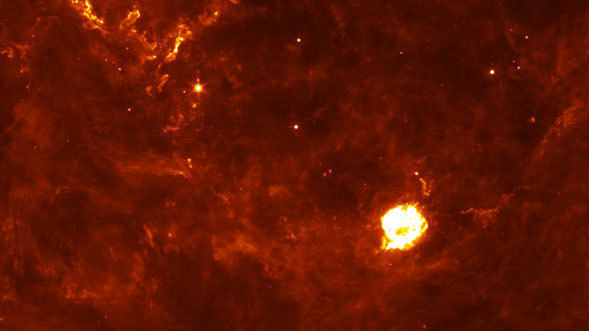 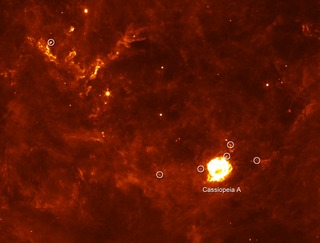