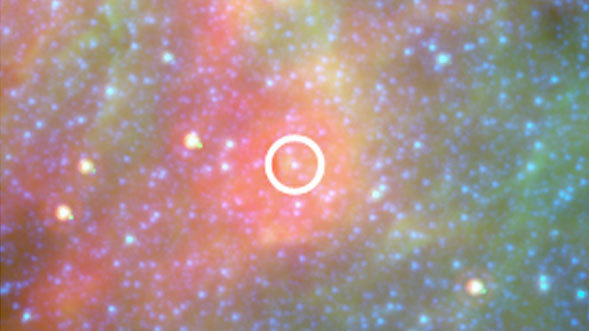 A contender for the title of brightest star in our Milky Way galaxy has been unearthed in the dusty metropolis of the galaxy's center.

Nicknamed the "Peony nebula star," the bright stellar bulb was revealed by NASA's Spitzer Space Telescope and other ground-based telescopes. It blazes with the light of an estimated 3.2 million suns.

The reigning "brightest star" champion is Eta Carina, with a whopping solar wattage of 4.7 million suns. But according to astronomers, it's hard to pin down an exact brightness, or luminosity, for these scorching stars, so they could potentially shine with a similar amount of light.

"The Peony nebula star is a fascinating creature. It appears to be the second-brightest star that we now know of in the galaxy, and it's located deep into the galaxy's center," said Lidia Oskinova of Potsdam University in Germany. "There are probably other stars just as bright if not brighter in our galaxy that remain hidden from view." Oskinova is principal investigator for the research and second author of a paper appearing in a future issue of the journal Astronomy and Astrophysics.

Scientists already knew about the Peony nebula star, but because of its sheltered location in the dusty central hub of our galaxy, its extreme luminosity was not revealed until now. Spitzer's dust-piercing infrared eyes can see straight into the heart of our galaxy, into regions impenetrable by visible light. Likewise, infrared data from the European Southern Observatory's New Technology Telescope in Chile were integral in calculating the Peony nebula star's luminosity.

"Infrared astronomy opens extraordinary views into the environment of the central region of our galaxy," said Oskinova.

The brightest stars in the universe are also the biggest. Astronomers estimate the Peony nebula star kicked off its life with a hefty mass of roughly 150 to 200 times that of our sun. Stars this massive are rare and puzzle astronomers because they push the limits required for stars to form. Theory predicts that if a star starts out too massive, it can't hold itself together and must break into a double or multiple stars instead.

Not only is the Peony nebula star hefty, it also has a wide girth. It is a type of giant blue star called a Wolf-Rayet star, with a diameter roughly 100 times that of our sun. That means this star, if placed where our sun is, would extend out to about the orbit of Mercury.

With so much mass, the star barely keeps itself together. It sheds an enormous amount of stellar matter in the form of strong winds over its relatively short lifetime of a few million years. This matter is pushed so hard by strong radiation from the star that the winds speed up to about 1.6 million kilometers per hour (one million miles per hour) in only a few hours.

Ultimately, the Peony nebula star will blow up in a fantastic explosion of cosmic proportions called a supernova. In fact, Oskinova and her colleagues say that the star is ripe for exploding soon, which in astronomical terms mean anytime from now to millions of years from now.

"When this star blows up, it will evaporate any planets orbiting stars in the vicinity," said Oskinova. "Farther out from the star, the explosion could actually trigger the birth of new stars."

In addition to the star itself, the astronomers noted a cloud of dust and gas, called a nebula, surrounding the star. The team nicknamed this cloud the Peony nebula because it resembles the ornate flower.

"The nebula was probably created from the spray of dust leaking off the massive Peony nebula star," said Andreas Barniske of Potsdam University, lead author of the study.

Wolf-Rainer Hamann, also of Potsdam University, is another co-author of the paper and the principal investigator of a Spitzer program enabling this research.

NASA's Jet Propulsion Laboratory, Pasadena, Calif., manages the Spitzer Space Telescope mission for NASA's Science Mission Directorate, Washington. Science operations are conducted at the Spitzer Science Center at the California Institute of Technology, also in Pasadena. Caltech manages JPL for NASA. Spitzer's infrared spectrograph, which was used to determine the luminosity of the Peony nebula star, was built by Cornell University, Ithaca, N.Y. Its development was led by Jim Houck of Cornell. For more information about Spitzer, visit /spitzer and http://www.nasa.gov/spitzer. 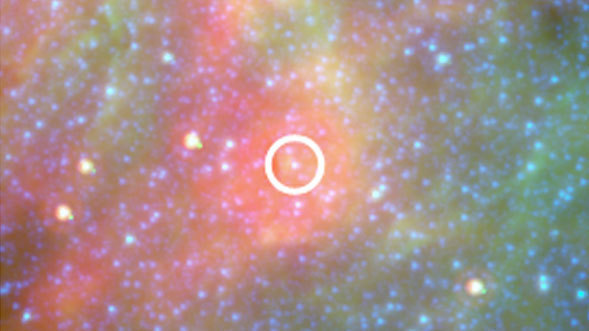 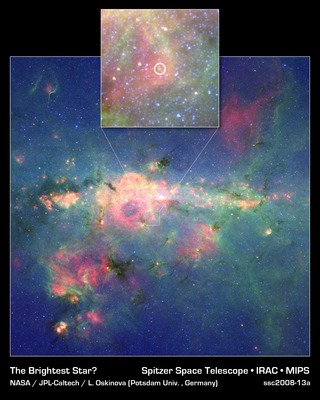 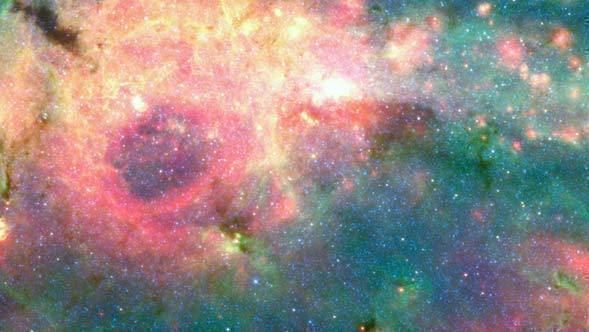