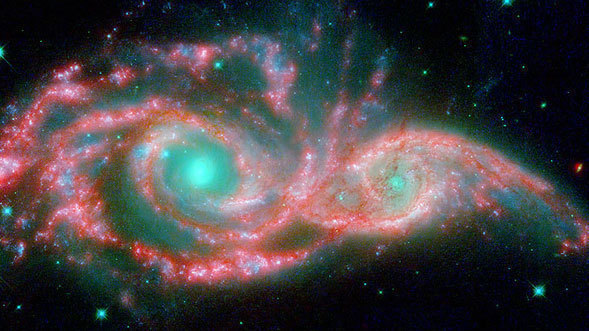 A pair of dancing galaxies appears dressed for a cosmic masquerade in a new image from NASA's Spitzer Space Telescope.

The infrared picture shows what looks like two icy blue eyes staring through an elaborate, swirling red mask. These "eyes" are actually the cores of two merging galaxies, called NGC 2207 and IC 2163, which recently met and began to twirl around each other.

The "mask" is made up of the galaxies' twisted spiral arms. Dotted along the arms, like strings of decorative pearls, are dusty clusters of newborn stars. This is the first time that clusters of this type, called "beads on a string" by astronomers, have been seen in NGC 2207 and IC 2163.

"This is the most elaborate case of beading we've seen in galaxies," said Dr. Debra Elmegreen of Vassar College in Poughkeepsie, N.Y. "They are evenly spaced and sized along the arms of both galaxies."

Elmegreen is lead author of a paper describing the Spitzer observations in the May 1 issue of the Astrophysical Journal.

Astronomers say the beads were formed when the galactic duo first met. "The galaxies shook each other, causing gas and dust to move around and collect into pockets dense enough to collapse gravitationally," said Dr. Kartik Sheth of NASA's Spitzer Science Center at the California Institute of Technology in Pasadena. Once this material condensed into thick bead-like clouds, stars of various sizes began to pop up within them.

Spitzer's infrared camera was able to see the dusty clouds for the first time because they glow with infrared light. The hot, young stars housed inside the clouds heat up the dust, which then radiates at infrared wavelengths. This dust is false-colored red in the image, while stars are represented in blue.

The Spitzer data also reveal an unusually bright bead adorning the left side of the "mask." This dazzling orb is so packed full of dusty materials that it accounts for five percent of the total infrared light coming from both galaxies. Elmegreen's team thinks the central stars in this dense cluster might have merged to become a black hole.

Visible-light images of the galaxies show stars located inside the beads, but the beads themselves are invisible. In those pictures, the galaxies look more like a set of owl-like eyes with "feathers" of scattered stars.

NGC 2207 and IC 2163 are located 140 million light-years away in the Canis Major constellation. The two galaxies will meld into one in about 500 million years, bringing their masquerade days to an end.

For more information about NASA and agency programs on the Web, visit http://www.nasa.gov/home/ 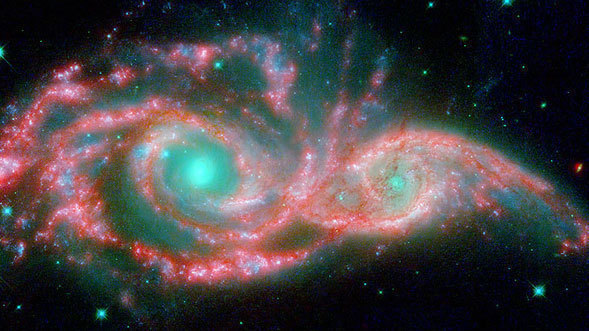 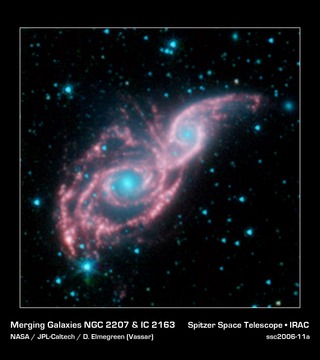 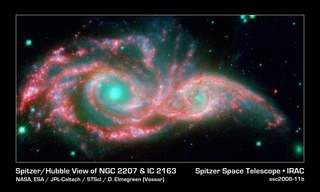 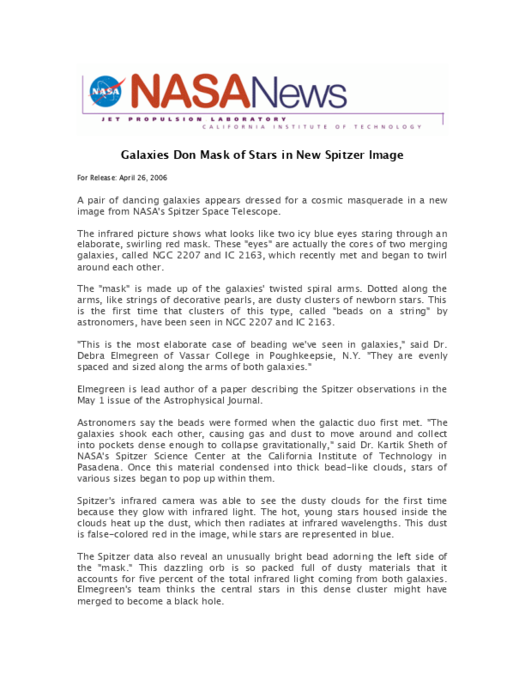