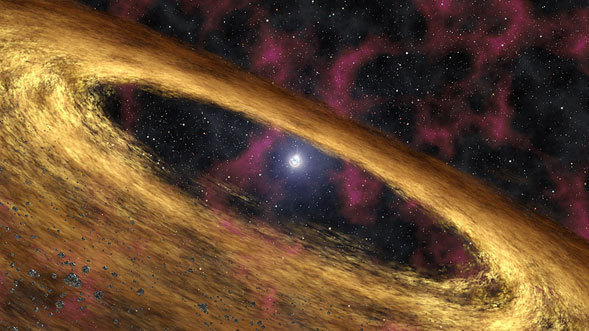 NASA's Spitzer Space Telescope has uncovered new evidence that planets might rise up out of a dead star's ashes.

The infrared telescope surveyed the scene around a pulsar, the remnant of an exploded star, and found a surrounding disk made up of debris shot out during the star's death throes. The dusty rubble in this disk might ultimately stick together to form planets.

This is the first time scientists have detected planet-building materials around a star that died in a fiery blast.

"We're amazed that the planet-formation process seems to be so universal," said Dr. Deepto Chakrabarty of the Massachusetts Institute of Technology in Cambridge, principal investigator of the new research. "Pulsars emit a tremendous amount of high energy radiation, yet within this harsh environment we have a disk that looks a lot like those around young stars where planets are formed."

A paper on the Spitzer finding appears in the April 6 issue of Nature. Other authors of the paper are lead author Zhongxiang Wang and co-author David Kaplan, both of the Massachusetts Institute of Technology.

The finding also represents the missing piece in a puzzle that arose in 1992, when Dr. Aleksander Wolszczan of Pennsylvania State University found three planets circling a pulsar called PSR B1257+12. Those pulsar planets, two the size of Earth, were the first planets of any type ever discovered outside our solar system. Astronomers have since found indirect evidence the pulsar planets were born out of a dusty debris disk, but nobody had directly detected this kind of disk until now.

The pulsar observed by Spitzer, named 4U 0142+61, is 13,000 light-years away in the Cassiopeia constellation. It was once a large, bright star with a mass between 10 and 20 times that of our sun. The star probably survived for about 10 million years, until it collapsed under its own weight about 100,000 years ago and blasted apart in a supernova explosion.

Some of the debris, or "fallback," from that explosion eventually settled into a disk orbiting the shrunken remains of the star, or pulsar. Spitzer was able to spot the warm glow of the dusty disk with its heat-seeking infrared eyes. The disk orbits at a distance of about 1 million miles and probably contains about 10 Earth-masses of material.

Pulsars are a class of supernova remnants, called neutron stars, which are incredibly dense. They have masses about 1.4 times that of the sun squeezed into bodies only 10 miles wide. One teaspoon of a neutron star would weigh about 2 billion tons. Pulsar 4U 0142+61 is an X-ray pulsar, meaning that it spins and pulses with X-ray radiation.

Any planets around the stars that gave rise to pulsars would have been incinerated when the stars blew up. The pulsar disk discovered by Spitzer might represent the first step in the formation of a new, more exotic type of planetary system, similar to the one found by Wolszczan in 1992.

"I find it very exciting to see direct evidence that the debris around a pulsar is capable of forming itself into a disk. This might be the beginning of a second generation of planets," Wolszczan said.

Pulsar planets would be bathed in intense radiation and would be quite different from those in our solar system. "These planets must be among the least hospitable places in the galaxy for the formation of life," said Dr. Charles Beichman, an astronomer at NASA's Jet Propulsion Laboratory and the California Institute of Technology, both in Pasadena, Calif.

The Jet Propulsion Laboratory manages the Spitzer Space Telescope mission for NASA's Science Mission Directorate, Washington. Science operations are conducted at the Spitzer Science Center at Caltech. JPL is a division of Caltech. Spitzer's infrared array camera, which made the pulsar observations, was built by NASA's Goddard Space Flight Center, Greenbelt, Md. The instrument's principal investigator is Dr. Giovanni Fazio of the Harvard-Smithsonian Center for Astrophysics. 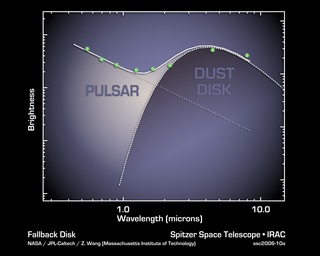 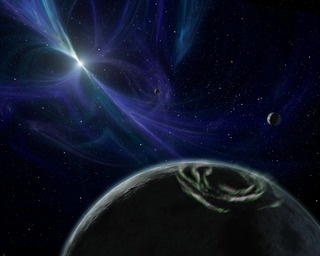 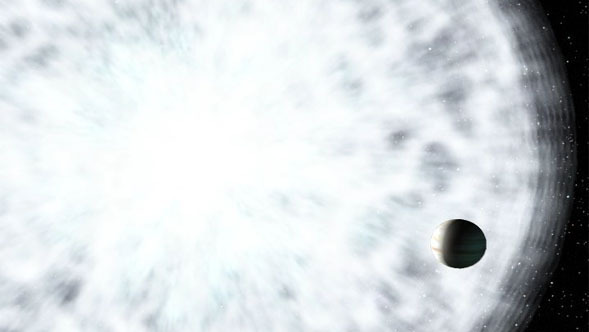 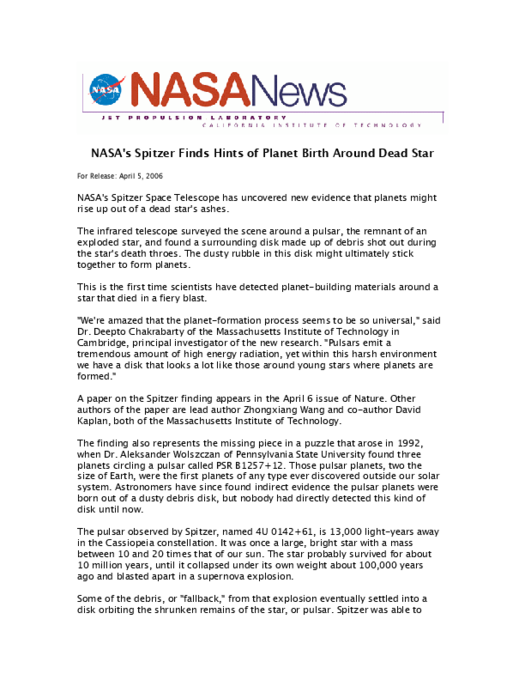