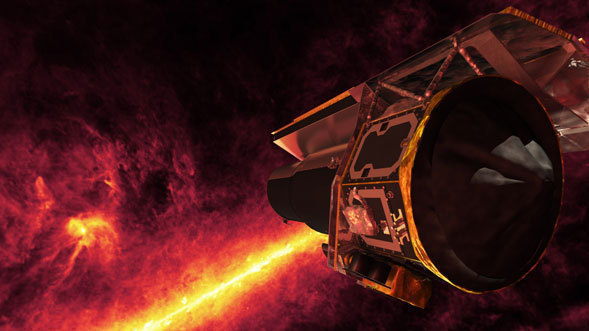 A NASA-led team of astronomers have used NASA's Spitzer Space Telescope to detect a strong flow of heat radiation from a toasty planet orbiting a nearby star. The findings allowed the team to "take the temperature" of the planet.

"This is the closest extrasolar planet to Earth that has ever been detected directly, and it presents the strongest heat emission ever seen from an exoplanet," said Drake Deming of NASA's Goddard Space Flight Center, Greenbelt, Md. Deming is the lead author of a paper on this observation to be published in the Astrophysical Journal on June 10. An advance copy of the paper will be posted on the astro-ph website on Feb. 22.

The planet "HD 189733b" orbits a star that is a near cosmic neighbor to our sun, at a distance of 63 light years in the direction of the Dumbbell Nebula. It orbits the star very closely, just slightly more than three percent of the distance between Earth and the sun. Such close proximity keeps the planet roasting at about 844 Celsius (about 1,551 Fahrenheit), according to the team's measurement.

The planet was discovered last year by Francois Bouchy of the Marseille Astrophysics Laboratory, France, and his team. The discovery observations allowed Bouchy's team to determine the planet's size (about 1.26 times Jupiter's diameter), mass (1.15 times Jupiter), and density (about 0.75 grams per cubic centimeter). The low density indicates the planet is a gas giant like Jupiter.

The observations also revealed the orbital period (2.219 days) and the distance from the parent star. From this distance and the temperature of the parent star, Bouchy's team estimated the planet's temperature was at least several hundred degrees Celsius, but they were not able to measure heat or light emitted directly from the planet.

"Our direct measurement confirms this estimate," said Deming. This temperature is too high for liquid water to exist on the planet or any moons it might have. Since known forms of life require liquid water, it is unlikely to have emerged there.

Last year, Deming's team and another group based at the Harvard-Smithsonian Center for Astrophysics used Spitzer to make the first direct detection of light from alien worlds, by observing the warm infrared glows of two other previously detected "Hot Jupiter" planets, designated HD 209458b and TrES-1.

Infrared light is invisible to the human eye, but detectable by special instruments. Some infrared light is perceived as heat. Hot Jupiter planets are alien gas giants that zip closely around their parent stars, like HD 189733b. From their close orbits, they soak up ample starlight and shine brightly in infrared wavelengths.

Deming's team used the same method to observe HD 189733b. To distinguish the planet's glow from its hot parent star, the astronomers used an elegant method. First, they used Spitzer to collect the total infrared light from both the star and its planet. Then, when the planet dipped behind the star as part of its regular orbit, the astronomers measured the infrared light coming from just the star. This pinpointed exactly how much infrared light belonged to the planet. Under optimal circumstances this same method can be used to make a crude temperature map of the planet itself.

"The heat signal from this planet is so strong that Spitzer was able to resolve its disk, in the sense that our team could tell we were seeing a round object in the data, not a mere point of light," said Deming. "The current Spitzer observations cannot yet make a temperature map of this world, but more observations by Spitzer or future infrared telescopes in space may be able to do that." 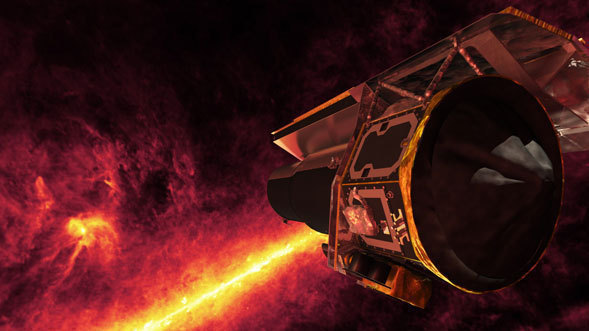 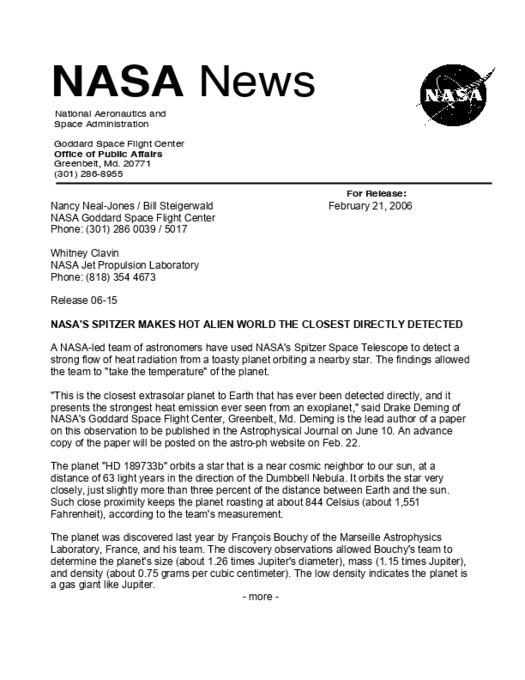