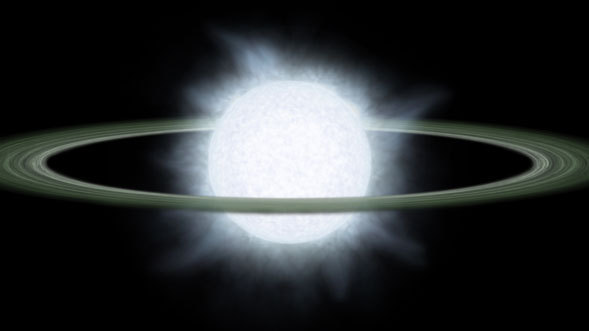 NASA's Spitzer Space Telescope has identified two huge "hypergiant" stars circled by monstrous disks of what might be planet-forming dust. The findings surprised astronomers because stars as big as these were thought to be inhospitable to planets.

"These extremely massive stars are tremendously hot and bright and have very strong winds, making the job of building planets difficult," said Joel Kastner of the Rochester Institute of Technology in New York. "Our data suggest that the planet-forming process may be hardier than previously believed, occurring around even the most massive stars that nature produces."

Kastner is first author of a paper describing the research in the Feb. 10 issue of Astrophysical Journal Letters.

Dusty disks around stars are thought to be signposts for present or future planetary systems. Our own sun is orbited by a thin disk of planetary debris, called the Kuiper Belt, which includes dust, comets and larger bodies similar to Pluto.

Last year, astronomers using Spitzer reported finding a dust disk around a miniature star, or brown dwarf, with only eight one-thousandths the mass of the sun. Disks have also been spotted before around stars five times more massive than the sun. The new Spitzer results expand the range of stars that sport disks to include the "extra large." The infrared telescope detected enormous amounts of dust around two positively plump stars, R 66 and R 126, located in the Milky Way's nearest neighbor galaxy, the Large Magellanic Cloud. Called hypergiants, these blazing hot stars are aging descendents of the most massive class of stars, referred to as "O" stars. They are 30 and 70 times the mass of the sun, respectively. If a hypergiant were located at the sun's position in our solar system, all the inner planets, including Earth, would fit comfortably within its circumference.

Astronomers estimate that the stars' disks are also bloated, spreading all the way out to an orbit about 60 times more distant than Pluto's around the sun. The disks are probably loaded with about ten times as much mass as is contained in the Kuiper Belt. Kastner and his colleagues say these dusty structures might represent the first or last steps of the planet-forming process. If the latter, then the disks can be thought of as enlarged versions of our Kuiper Belt.

"These disks may be well-populated with comets and other larger bodies called planetesimals," said Kastner. "They might be thought of as Kuiper Belts on steroids."

Spitzer detected the disks during a survey of 60 bright stars thought to be wrapped in spherical cocoons of dust. According to Kastner, R 66 and R 126 "stuck out like sore thumbs" because their light signatures, or spectra, indicated the presence of flattened disks. He and his team believe these disks whirl around the hypergiant stars, but they say it is possible the giant disks orbit unseen, slightly smaller companion stars.

A close inspection of the dust making up the disks revealed the presence of sand-like planetary building blocks called silicates. In addition, the disk around R 66 showed signs of dust clumping in the form of silicate crystals and larger dust grains. Such clumping can be a significant step in the construction of planets.

Stars as massive as R 66 and R 126 don't live very long. They burn through all of their nuclear fuel in only a few million years, and go out with a bang, in fiery explosions called supernovae. Their short lifespans don't leave much time for planets, or life, to evolve. Any planets that might crop up would probably be destroyed when the stars blast apart.

"We do not know if planets like those in our solar system are able to form in the highly energetic, dynamic environment of these massive stars, but if they could, their existence would be a short and exciting one," said Charles Beichman, an astronomer at NASA's Jet Propulsion Laboratory and the California Institute of Technology, both in Pasadena.

Other authors of this work include Catherine L. Buchanan of the Rochester Institute of Technology, and B. Sargent and W. J. Forrest of the University of Rochester, N.Y.

The Jet Propulsion Laboratory manages the Spitzer Space Telescope mission for NASA's Science Mission Directorate, Washington. Science operations are conducted at the Spitzer Science Center at Caltech. JPL is a division of Caltech. Spitzer's infrared spectrograph, which made the new observations, was built by Cornell University, Ithaca, N.Y. Its development was led by Jim Houck of Cornell.

For more information about NASA and agency programs on the Web, visit http://www.nasa.gov/home/. 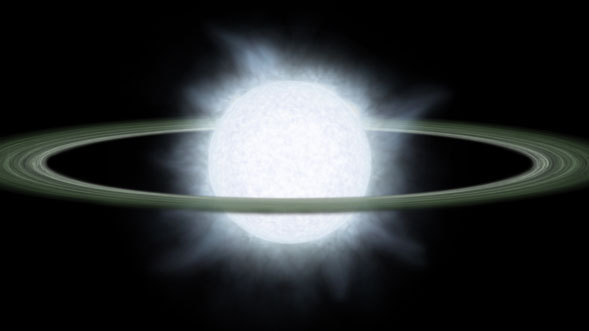 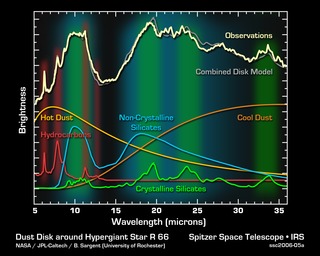 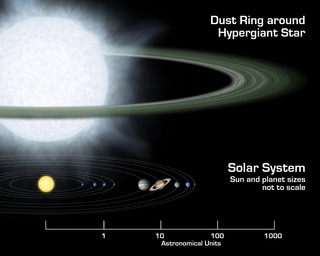