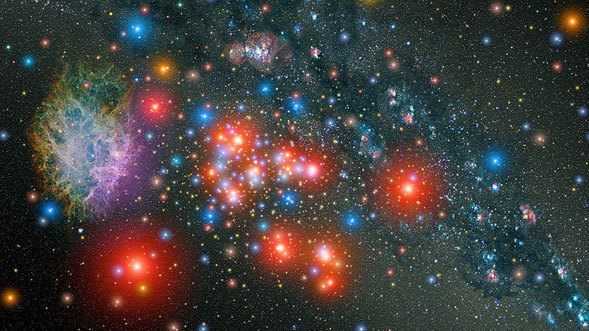 Call it the Bermuda Triangle of our Milky Way Galaxy: a tiny patch of sky that has been known for years to be the source of the mysterious blasts of X-rays and gamma rays. Now, a team of astronomers, led by Don Figer of the Space Telescope Science Institute (STScI) in Baltimore, Md., has solved the mystery by identifying one of the most massive star clusters in the galaxy. The little-known cluster, which has not been catalogued, is about 20 times more massive than typical star clusters in our galaxy, and appears to be the source of the powerful outbursts.

Supporting evidence for the hefty weight of this cluster is the presence of 14 red supergiants, hefty stars that have reached the end of their lives. They bloat up to about 100 times their normal size before exploding as supernovae. In fact, Figers's team believes that the blasts of X-rays and gamma rays were released in supernova explosions. Sightings of red supergiants are rare. Astronomers have spotted only about 200 such stars in the Milky Way. The lack of sightings is because the red supergiant phase is very short in astronomical terms, lasting about half a million to a million years.

"Only the most massive clusters can have lots of red supergiants, because they are the only clusters capable of making behemoth stars," Figer explained. "They are good signposts that allow astronomers to predict the mass of the cluster. This observation also is a rare chance to study huge stars just before they explode. Normally, we don't get to see stars before they pop off." Figer will present his results on Jan. 9 at the 207th meeting of the American Astronomical Society in Washington, D.C. The 14 red supergiants in this cluster represent almost three times as many as in any other star cluster in our galaxy. The runner-up, NGC 7419, has five. Stars that become red supergiants weigh between 8 to 25 times our Sun's mass and are 6 to 15 million years old.

The team identified the star cluster as a potential behemoth from the newly found clusters compiled in the Two Micron All Sky Survey catalogue. Astronomer John MacKenty, also of STScI, performed follow-up observations of the cluster in Sept. and Oct. 2005 with a unique ground-based infrared spectrograph at Kitt Peak National Observatory in Arizona. Called the Infrared Multi-object Spectrograph, "the instrument has about 500,000 movable microscopic mirrors in its focal plane which allow astronomers to take infrared spectra of up to 100 stars at once," said MacKenty, the instrument's lead investigator. Spectra display stars' energy output as a series of individual wavelengths of light for study. The resulting patterns are akin to sets of fingerprints for stars, revealing characteristics such as composition, temperature, mass, and age. Astronomers plan to use similar technology on the Near Infrared Spectrograph aboard the James Webb Space Telescope, scheduled for launch in 2013.

Figer relied on data from a variety of telescopes, including the Spitzer Space Telescope, to confirm that the infrared colors of the suspected red supergiants are consistent with those of known red supergiants. The red supergiants discovered by Figer's team are very bright, indicating that the cluster is a youngster of about 8 to 10 million years old. The cluster has to be young enough for astronomers to see these short-lived stars before they explode, yet old enough to have stars that have evolved to the red supergiant stage. The cluster's mass equals 20,000 times the mass of our Sun. An estimated 20,000 stars reside in the cluster.

The cluster is the first of 130 massive star cluster candidates that Figer and his team will study over the next five years using a variety of telescopes, including the Spitzer and Hubble Space telescopes. "We can only see a small part of our galaxy in visible light because a dusty veil covers most of our galaxy," Figer said. "I know there are other massive clusters in the Milky Way that we can't see because of the dust. My goal is to find them using infrared light, which penetrates the dusty veil."

The monster cluster's location, nearly two-thirds of the way to our galaxy's center and 18,900 light-years from Earth, is in an area known for energetic activity. Several observatories -- the High Energy Stereoscopic System, the International Gamma-Ray Astrophysics Laboratory and the Advanced Satellite for Cosmology and Astrophysics -- detected very high-energy X-rays and gamma rays from that region. Astronomers knew that something powerful was occurring there, but they couldn't identify the source. 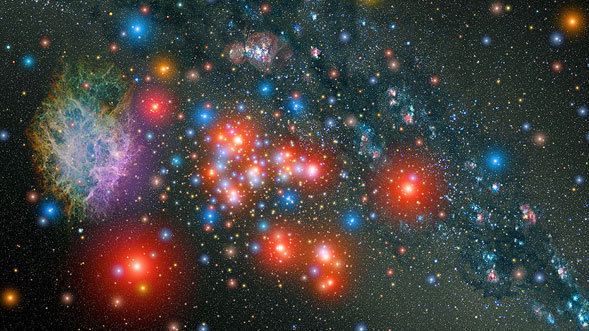 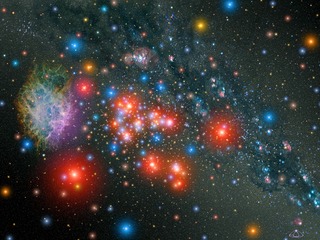