We have launched the new Spitzer website! Send feedback to outreach@ipac.caltech.edu. Find the old website at http://legacy.spitzer.caltech.edu.
NASA
Jet Propulsion Laboratory
California Institute of Technology
Scientists See Light that May Be from First Objects in Universe 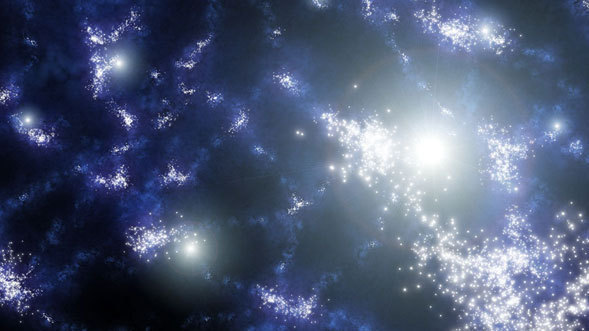 Scientists using NASA's Spitzer Space Telescope say they have detected light that may be from the earliest objects in the universe. If confirmed, the observation provides a glimpse of an era more than 13 billion years ago when, after the fading embers of the theorized Big Bang gave way to millions of years of pervasive darkness, the universe came alive.

This light could be from the very first stars or perhaps from hot gas falling into the first black holes. The science team, based at NASA Goddard Space Flight Center in Greenbelt, Md., describes the observation as seeing the glow of a distant city at night from an airplane. The light is too distant and feeble to resolve individual objects.

"We think we are seeing the collective light from millions of the first objects to form in the universe," said Dr. Alexander Kashlinsky, Science Systems and Applications scientist and lead author on the Nature article that appeared in the Nov. 3 issue. "The objects disappeared eons ago, yet their light is still traveling across the universe."

Scientists theorize that space, time and matter originated 13.7 billion years ago in a Big Bang. Another 200 million years would pass before the era of first starlight. A 10-hour observation by Spitzer's infrared array camera in the constellation Draco captured a diffuse glow of infrared light, lower in energy than optical light and invisible to us. The Goddard team says that this glow is likely from Population III stars, a hypothesized class of stars thought to have formed before all others. (Population I and II stars, named by order of their discovery, comprise the familiar types of stars we see at night.)

Theorists say the first stars were likely over a hundred times more massive than Earth's sun and extremely hot, bright, and short-lived, each one burning for only a few million years. The ultraviolet light that Population III stars emitted would be redshifted, or stretched to lower energies, by the universe's expansion. That light should now be detectable in the infrared.

"This deep observation was filled with familiar-looking stars and galaxies," said Dr. John Mather, senior project scientist for JWST and a co-author on the Nature article. "We removed everything we knew---all the stars and galaxies both near and far. We were left with a picture of part of the sky with no stars or galaxies, but it still had this infrared glow with giant blobs that we think could be the glow from the very first stars."

This new Spitzer discovery agrees with observations from the NASA Cosmic Background Explorer (COBE) satellite from the 1990s that suggested there may be an infrared background that could not be attributed to known stars. It also supports observations from the NASA Wilkinson Microwave Anisotropy Probe from 2003, which estimated that stars first ignited 200 million to 400 million years after the Big Bang.

"This difficult measurement pushes the instrument to performance limits that were not anticipated in its design," said team member Dr. S. Harvey Moseley, instrument scientist for Spitzer. "We have worked very hard to rule out other sources for the signal we observed."

The low noise and high resolution of Spitzer's infrared array camera enabled the team to remove the fog of foreground galaxies, made of later stellar populations, until the cumulative light from the first light dominated the signal on large angular scales. The team, which also includes Dr. Richard Arendt, Science Systems and Applications scientist, noted that future missions, such as NASA's James Webb Space Telescope, will find the first individual clumps of these stars or the individual exploding stars that might have made the first black holes. 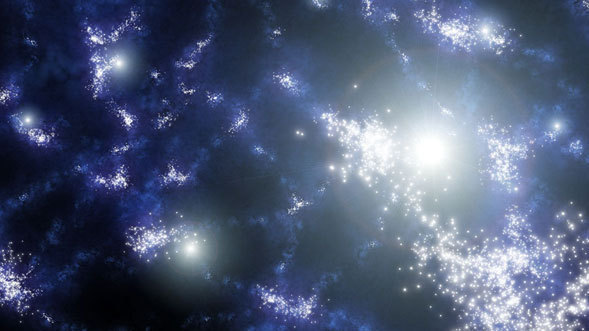 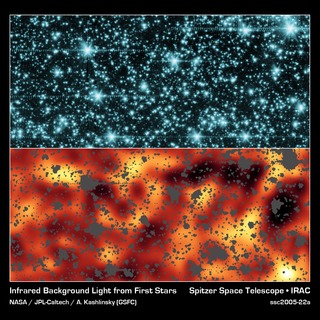 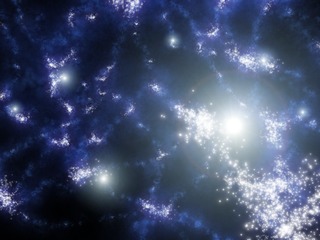