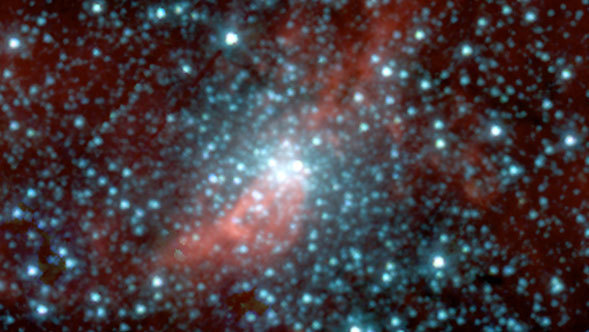 Just when astronomers thought they might have dug up the last of our galaxy's "fossils," they've discovered a new one in the galactic equivalent of our own backyard.

Called globular clusters, these ancient bundles of stars date back to the birth of our Milky Way galaxy, 13 or so billion years ago. They are sprinkled around the center of the galaxy like seeds in a pumpkin. Astronomers use clusters as tools for studying the Milky Way's age and formation.

New infrared images from NASA's Spitzer Space Telescope and the University of Wyoming Infrared Observatory reveal a never-before-seen globular cluster within the dusty confines of the Milky Way. The findings will be reported in an upcoming issue of the Astronomical Journal.

"It's like finding a long-lost cousin," said Dr. Chip Kobulnicky, a professor of physics and astronomy at the University of Wyoming, Laramie, and lead author of the report. "We thought all the galaxy's globular clusters had already been found."

"I couldn't believe what I was seeing," said Andrew Monson, a graduate student at the University of Wyoming, who first spotted the cluster. "I certainly wasn't expecting to find such a cluster."

The newfound cluster is one of about 150 known to orbit the center of the Milky Way. These tightly packed knots of stars are among the oldest objects in our galaxy, having formed about 10 to 13 billion years ago. They contain several hundred thousand stars, most of which are older and less massive than our Sun.

Monson first noticed the cluster while scanning data from the Spitzer Space Telescope's Galactic Legacy Infrared Mid-Plane Survey Extraordinaire -- a survey to find objects hidden within the dusty mid-plane of our galaxy. He then searched archival data for a match and found only one undocumented image of the cluster from a previous NASA-funded infrared survey of the sky, called the Two Micron All-Sky Survey. "The cluster was there in the data but nobody had found it," said Monson.

"This discovery demonstrates why Spitzer is so powerful -- it can see objects that are completely hidden in visible light," said Dr. Michael Werner of NASA's Jet Propulsion Laboratory, Pasadena, Calif., project scientist for Spitzer. "This is particularly relevant to the study of the plane of our galaxy, where dust blocks most visible light."

Additional information about the University of Wyoming Infrared Observatory is available at http://physics.uwyo.edu/~mpierce/WIRO/. 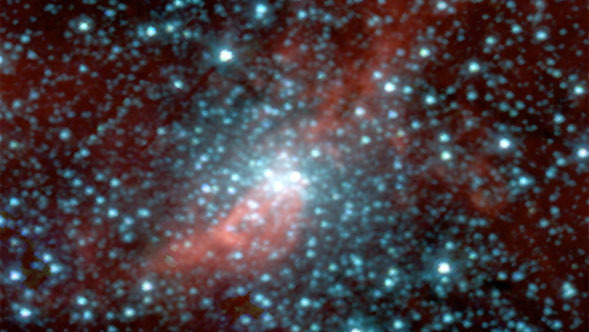