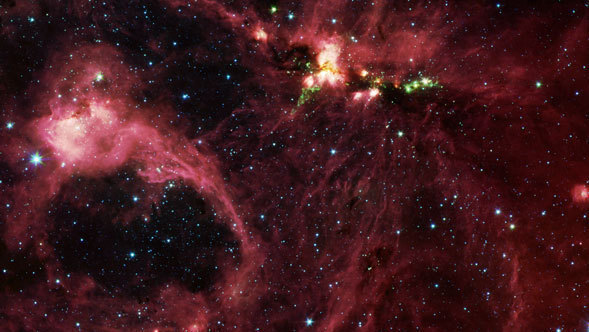 Hidden behind a curtain of dusty darkness lurks one of the most violent pockets of star birth in our galaxy. Called DR21, this stellar nursery is so draped in cosmic dust that it appears invisible to the human eye.

By seeing in the infrared, NASA's Spitzer Space Telescope has pulled this veil aside, revealing a fireworks-like display of massive stars. The biggest of these stars is estimated to be 100,000 times as bright as our own Sun.

"We've never seen anything like this before," said Dr. William Reach, an investigator for the latest observations and an astronomer at the Spitzer Science Center, located at the California Institute of Technology, Pasadena, Calif. "The massive stars are ripping the cloud of gas and dust around them to shreds." The principal investigator is Dr. Anthony Marston, a former Spitzer astronomer now at the European Space Research and Technology Centre, the Netherlands.

Located about 10,000 light-years away in the Cygnus constellation of our Milky Way galaxy, DR21 is a turbulent nest of giant newborn stars. The region is buried in so much space dust that no visible light escapes it. Previous images taken with radio and near-infrared bands of light reveal a powerful jet emanating from a huge, nebulous cloud. But these views are just the tip of the iceberg.

Spitzer's highly sensitive infrared detectors were able to see past the obscuring dust to the stars behind. The new false-color image spans a vast expanse of space, with DR21 at the top center. Within DR21, a dense knot of massive stars can be seen surrounded by a wispy cloud of gas and dust. Red filaments containing organic compounds called polycyclic aromatic hydrocarbons stretch horizontally and vertically across this cloud. A green jet of gas shoots downward past the bulge of stars and represents fast-moving, hot gas being ejected from the region's biggest star.

Below DR21 are distinct pockets of star formation, never captured in full detail before. The large swirling cloud to the lower left is thought to be a stellar nursery like DR21's, but with smaller stars. A bubble possibly formed by a past generation of stars is visible within the lower rim of this cloud.

The new view testifies to the ability of massive newborn stars to destroy the cloud that blankets them. Astronomers plan to use these observations to determine precisely how such an energetic event occurs. 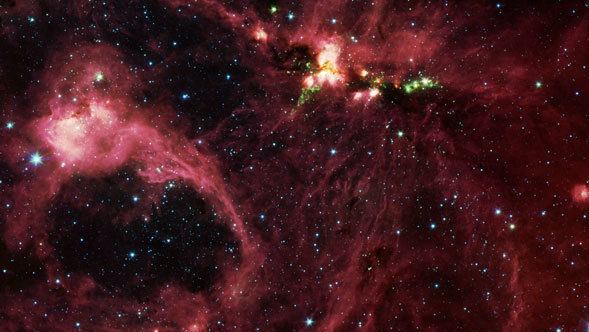 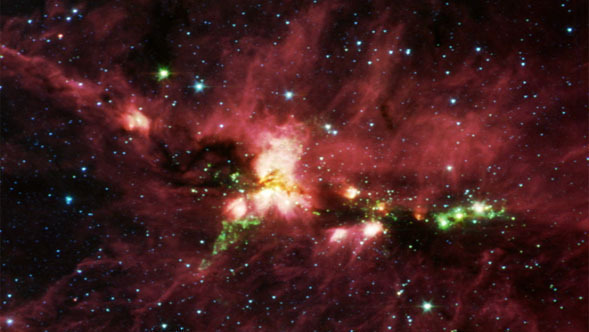