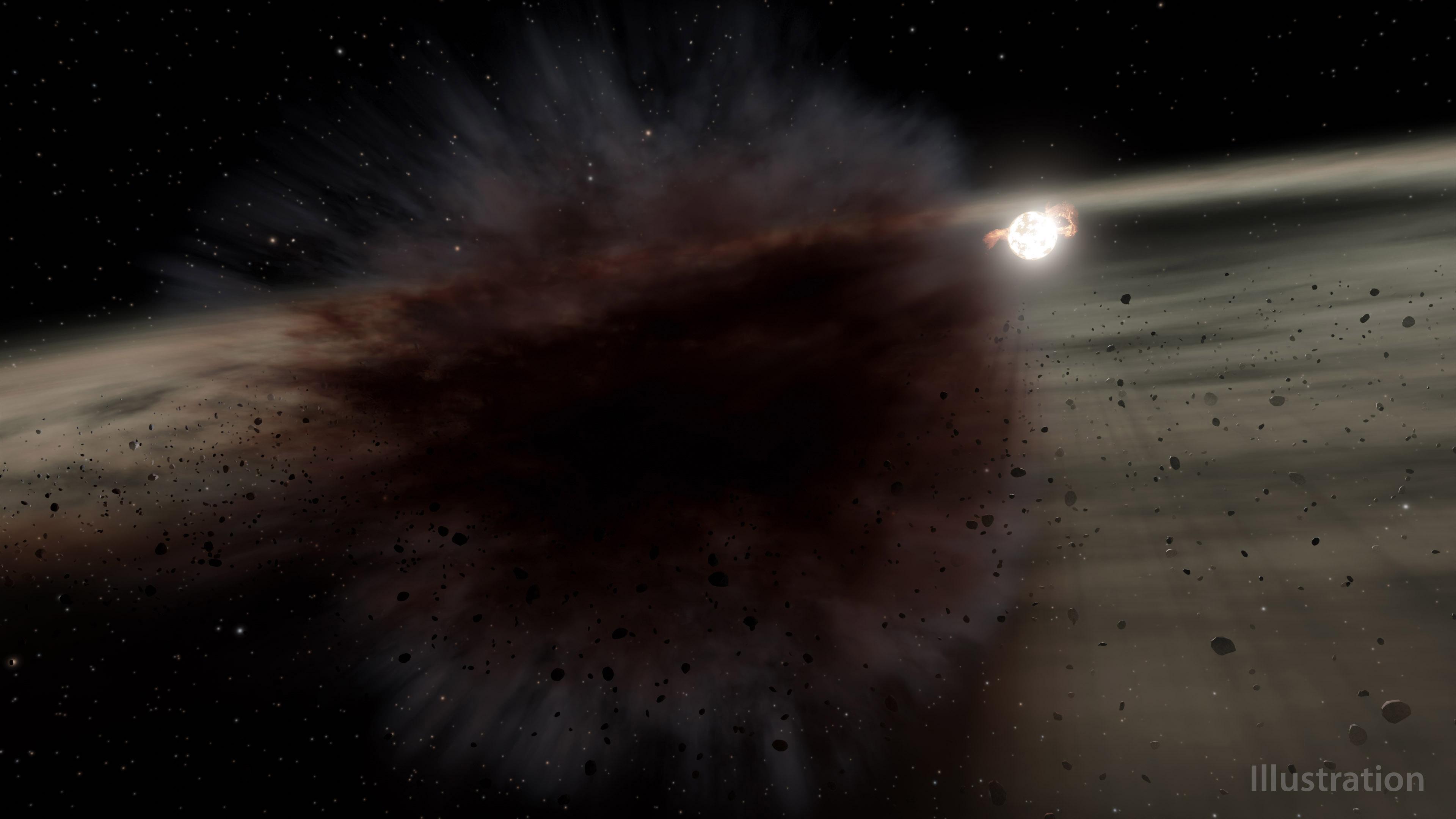 This illustration depicts the result of a collision between two large asteroid-sized bodies. NASA's Spitzer saw a debris cloud block the star HD 166191, giving scientists details about the smashup that occurred. Credit: NASA/JPL-Caltech

Major smashups between rocky bodies shaped our solar system. Observations of a similar crash give clues about how frequent these events are around other stars.

Most of the rocky planets and satellites in our solar system, including Earth and the Moon, were formed or shaped by massive collisions early in the solar system’s history. By smashing together, rocky bodies can accumulate more material, increasing in size, or they can break apart into multiple smaller bodies.

Astronomers using NASA’s now-retired Spitzer Space Telescope have in the past found evidence of these types of collisions around young stars where rocky planets are forming. But those observations didn’t provide many details about the smashups, such as the size of the objects involved.

In a new study in the Astrophysical Journal, a group of astronomers led by Kate Su of the University of Arizona report the first observations of a debris cloud from one of these collisions as it passed in front of its star and briefly blocked the light. Astronomers call this a transit. Coupled with knowledge about the star’s size and brightness, the observations enabled the researchers to directly determine the size of the cloud shortly after impact, estimate the size of the objects that collided, and watch the speed with which the cloud dispersed.

“There is no substitute for being an eyewitness to an event,” said George Rieke, also at the University of Arizona and a coauthor of the new study. “All the cases reported previously from Spitzer have been unresolved, with only theoretical hypotheses about what the actual event and debris cloud might have looked like.”

Beginning in 2015, a team led by Su started making routine observations of a 10 million-year-old star called HD 166191. Around this early time in a star’s life, dust left over from its formation has clumped together to form rocky bodies called planetesimals – seeds of future planets. Once the gas that previously filled the space between those objects has dispersed, catastrophic collisions between them become common.

Anticipating they might see evidence of one of these collisions around HD 166191, the team used Spitzer to conduct more than 100 observations of the system between 2015 and 2019. While the planetesimals are too small and distant to resolve by telescope, their smashups produce large amounts of dust. Spitzer detected infrared light – or wavelengths slightly longer than what human eyes can see. Infrared is ideal for detecting dust, including the debris created by protoplanet collisions.

In mid-2018, the space telescope saw the HD 166191 system become significantly brighter, suggesting an increase in debris production. During that time, Spitzer also detected a debris cloud blocking the star. Combining Spitzer’s observation of the transit with observations by telescopes on the ground, the team could deduce the size and shape of the debris cloud.

Their work suggests the cloud was highly elongated, with a minimum estimated area three times that of the star. However, the amount of infrared brightening Spitzer saw suggests only a small portion of the cloud passed in front of the star and that the debris from this event covered an area hundreds of times larger than that of the star.

To produce a cloud that big, the objects in the main collision must have been the size of dwarf planets, like Vesta in our solar system – an object 330 miles (530 kilometers) wide located in the main asteroid belt between Mars and Jupiter. The initial clash generated enough energy and heat to vaporize some of the material. It also set off a chain reaction of impacts between fragments from the first collision and other small bodies in the system, which likely created a significant amount of the dust Spitzer saw.

Over the next few months, the large dust cloud grew in size and became more translucent, indicating that the dust and other debris were quickly dispersing throughout the young star system. By 2019, the cloud that passed in front of the star was no longer visible, but the system contained twice as much dust as it had before Spitzer spotted the cloud. This information, according to the paper’s authors, can help scientists test theories about how terrestrial planets form and grow.

“By looking at dusty debris disks around young stars, we can essentially look back in time and see the processes that may have shaped our own solar system,” said Su. “Learning about the outcome of collisions in these systems, we may also get a better idea of how frequently rocky planets form around other stars.”

The entire body of scientific data collected by Spitzer during its lifetime is available to the public via the Spitzer data archive, housed at the Infrared Science Archive at IPAC at Caltech in Pasadena, California. JPL, a division of Caltech, managed Spitzer mission operations for NASA’s Science Mission Directorate in Washington. Science operations were conducted at the Spitzer Science Center at IPAC at Caltech. Spacecraft operations were based at Lockheed Martin Space in Littleton, Colorado. 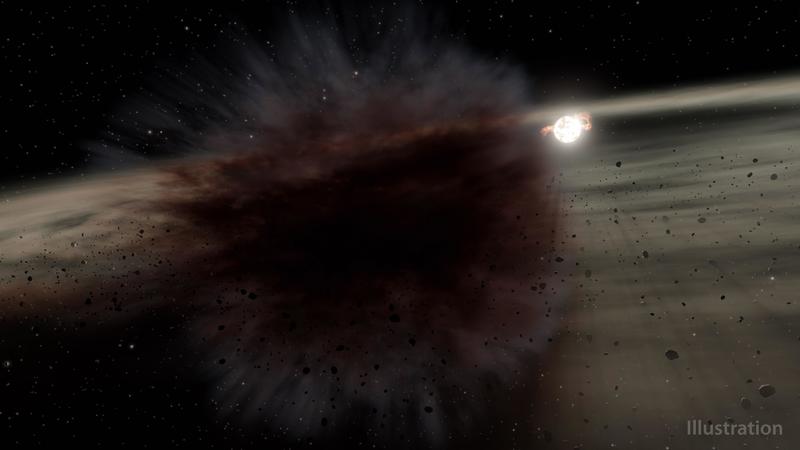 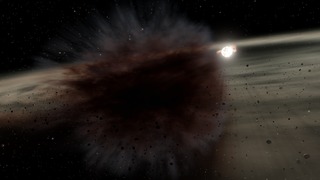