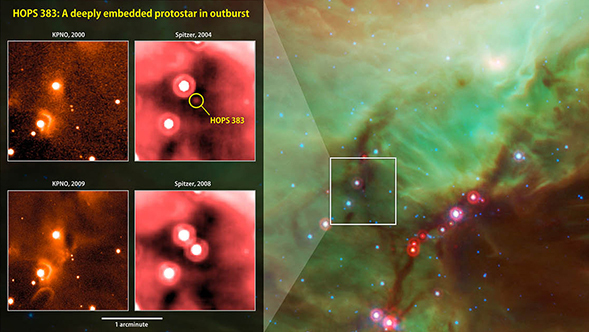 Using data from orbiting observatories, including NASA's Spitzer Space Telescope, and from ground-based facilities, an international team of astronomers has discovered an outburst from a star thought to be in the earliest phase of its development. The eruption, scientists say, reveals a sudden accumulation of gas and dust by an exceptionally young star, or protostar, known as HOPS 383.

Stars form within collapsing fragments of cold gas clouds. As the cloud contracts under its own gravity, its central region becomes denser and hotter. By the end of this process, the collapsing fragment has transformed into a hot central protostar surrounded by a dusty disk roughly equal in mass, embedded in a dense envelope of gas and dust. Astronomers call this a "Class 0" protostar.

"HOPS 383 is the first outburst we've ever seen from a Class 0 object, and it appears to be the youngest protostellar eruption ever recorded," said William Fischer, a NASA Postdoctoral Program Fellow at NASA's Goddard Space Flight Center in Greenbelt, Maryland.

The Class 0 phase is short-lived, lasting roughly 150,000 years, and is considered the earliest developmental stage for stars like the sun.

A protostar has not yet developed the energy-generating capabilities of a sun-like star, which fuses hydrogen into helium in its core. Instead, a protostar shines from the heat energy released by its contraction and by the accumulation of material from the disk of gas and dust surrounding it. The disk may one day develop asteroids, comets and planets.

Because these infant suns are thickly swaddled in gas and dust, their visible light cannot escape. But the light warms dust around the protostar, which reradiates the energy in the form of heat detectable by infrared-sensitive instruments on ground-based telescopes and orbiting satellites.

HOPS 383 is located near NGC 1977, a nebula in the constellation Orion, and is a part of its sprawling star-formation complex. Located about 1,400 light-years from Earth, the region constitutes the most active nearby "star factory" and hosts a treasure trove of young stellar objects still embedded in their natal clouds.

A team led by Thomas Megeath at the University of Toledo in Ohio used Spitzer to identify more than 300 protostars in the Orion complex. A follow-on project using the European Space Agency's Herschel Space Observatory, called the Herschel Orion Protostar Survey (HOPS), studied many of these objects in greater detail. NASA's Jet Propulsion Laboratory in Pasadena, California, manages Spitzer and, while Herschel was still active, managed the U.S. portion of that mission as well.

The eruption of HOPS 383 was first recognized in 2014 by astronomer Emily Safron shortly after her graduation from the University of Toledo. Under the supervision of Megeath and Fischer, she had just completed her senior thesis comparing the decade-old Spitzer Orion survey with 2010 observations from NASA's Wide-field Infrared Survey Explorer (WISE) satellite, which was also managed by JPL. Using software to analyze the data, Safron had already run through it several times without finding anything new. But with her thesis completed and graduation behind her, she decided to take the extra time to compare images of the "funny objects" by eye.

That's when she noticed HOPS 383's dramatic change. "This beautiful outburst was lurking in our sample the whole time," Safron said.

Safron's catalog of observations included Spitzer data at wavelengths of 3.6, 4.5 and 24 microns and WISE data at 3.4, 4.6 and 22 microns. HOPS 383 is so deeply enshrouded in dust that it wasn't seen at all before the outburst at the shortest Spitzer wavelength, and an oversight in a version of the catalog produced before Safron's involvement masked the increase at the longest wavelengths. As a result, her software saw a rise in brightness in only one wavelength out of three, which failed to meet her criteria for the changes she was hoping to find.

Once they realized what had happened, Safron, Fischer and their colleagues gathered additional Spitzer data, Herschel observations, and images from ground-based infrared telescopes at the Kitt Peak National Observatory in Arizona and the Atacama Pathfinder Experiment in northern Chile. Their findings were published in the Feb. 10 edition of The Astrophysical Journal.

The first hint of brightening appears in Spitzer data beginning in 2006. By 2008, they write, HOPS 383's brightness at a wavelength of 24 microns had increased by 35 times. According to the most recent data available, from 2012, the eruption shows no sign of abating.

"An outburst lasting this long rules out many possibilities, and we think HOPS 383 is best explained by a sudden increase in the amount of gas the protostar is accreting from the disk around it," explained Fischer.

Scientists suspect that instabilities in the disk lead to episodes where large quantities of material flow onto the central protostar. The star develops an extreme hot spot at the impact point, which in turn heats up the disk, and both brighten dramatically. 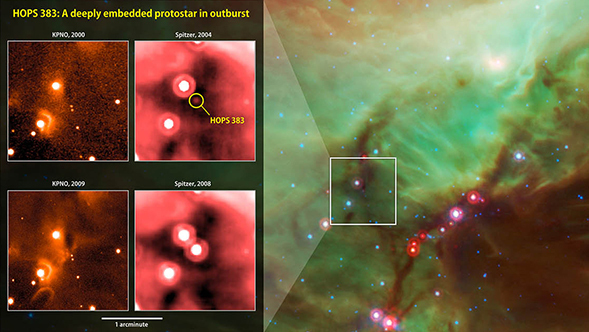 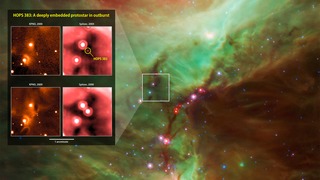